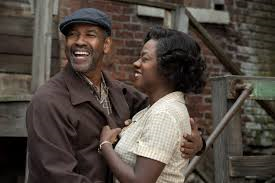 Denzel Washington’s third film as a director, based on the Pulitzer Prize winning play of the same name by August Wilson, is a powerhouse performance movie showcasing the talents of its cast, and, in particular, of the actor himself and his co-star Viola Davis.  Set in 1950s Pittsburgh, Fences concerns one Troy Maxson (Washington), a fifty-something-year-old patriarch who works as a binman and harbours more than a few resentments about the past.  A promising baseball player some years before, Troy clings on to the unfounded notion that racial prejudice blocked his rightful path to the major leagues.  A closer version of the truth however is that age was most likely Troy’s impediment in this regard.  His wife Rose (Davis) suggests as much in the film’s first act when Troy comes home one Friday evening with his longtime buddy Mr. Bono (Stephen Henderson).  Later on we are made aware by Troy himself that he was a thief in a previous existence.  This predilection towards crime led him to killing a man which resulted in a lengthy spell in prison.  By the time he was released, Troy was already past his physical prime in spite of his self-heralded talent with a bat.  But the myth of his own powers lingers on and is sustained in his several rambling and vivid accounts.  There is also a dangerous swagger in his bearing which has never gone unnoticed to those around him, particularly Rose and their son Cory (Jovan Adepo). 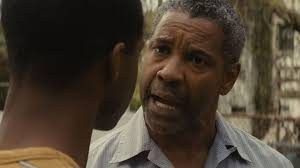 Troy has quite a personal history and this extends beyond his playing days and his spell in the slam.  He also has an older son called Lyons (Russell Hornsby) by another woman.  In his early thirties, Lyons is an aspiring musician, which is something that does not sit well with his hard-working father.  Troy belittles Lyons for calling around to the house seeking handouts and advocates the more blue-collar approach of getting a regular 9-to-5 job.  Responsibility is a recurring message he also hammers home to Cory.  In a pivotal scene the football-playing boy asks his father why he doesn’t like him.  ‘What law says I have to like you?’ Troy replies as he persists with this doctrine of obligation.  The precept which he articulates is one which he expects others to live by.  When Troy discovers that Cory has not returned to his part-time job at the grocery store, he arranges it so that his coach dismisses him from the football team.  On the surface Troy justifies such an action from a fatherly perspective in that he does not wish for the boy to suffer the disappointment he once experienced.  But underneath there may also be a residual jealousy.  Cory has an opportunity to get a college education for himself through the game.  Troy, for his part, cannot even read.  The promotion he receives at work (becoming a garbage truck driver) is in truth small potatoes compared to the potential his son could well realise. 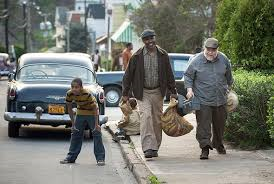 And of course Troy is a deeply flawed individual in other respects as well.  There are a few references as to how he he used a government payout to his brother Gabriel to purchase the family home.  Gabe – a war veteran from WWII – is mentally impaired from a head injury he received overseas during the conflict.  Troy is polite and accommodating towards his sibling, but also somewhat uncomfortable in his presence, especially when he becomes publicly vocal.  Lastly, there is the not insignificant matter of a mistress who Troy has met in the local bar.  This woman never appears on screen, but becomes the mother of his daughter Raynell – she subsequently passes in childbirth.  Much too late, and in a self-serving way, Troy admits his guilt to Rose upon learning of the pregnancy.  After the mother’s death, he cleverly plays on Rose’s good nature and innate maternal instincts in terms of raising the child.  A wedge which has formed between them is suggested to pass with the transition of time.  But a final confrontation with son Cory damages that particular relationship beyond repair.  Troy is a man stuck in his own shell and the fence that he constructs for much of the film’s duration is more than just a mere structure.  It’s a metaphor for something else indeed; a trope which Fences returns to many times over. 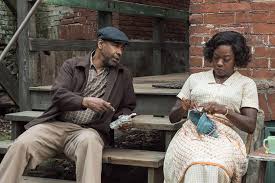 This is a film predicated on performance, as I suggested earlier, and in that regard it’s Denzel and Viola’s show all the way.  The two actors previously played the same parts in a 2010 revival and this latter foundation serves them well here as they complement each other quite magnificently onscreen.  Washington has always been a brilliantly physical actor capable of emoting menace and vulnerability and his Troy is exactly the correct measure of these characteristics.  As for Davis, she personifies weary submission coupled with a dormant exasperation at her husband’s foibles.  When he complains of standing in the same place for the past 18 years, she counters with more than a little interest.  It’s a pleasure to see two of the finest actors of their generation at the height of their powers and Fences is worth the admission price for such exchanges alone.  A fine supporting cast in tow add substance and depth to the proceedings.  But of course Fences is a screen adaptation of a play and it does betray its roots ever so slightly.  There is little sense of the world outside the environs of the characters despite references to war, sport, military duty and even history in the making (small portraits of JFK and Martin Luther King popping up in Rose’s kitchen towards the end) and Fences never quite rises above its origins in terms of being a properly-felt cinematic entity.  That slight criticism aside, it is nonetheless a thoroughly engaging production with brilliant actors to the fore who remind us of how resonant the art of performance still remains.  Go see it and marvel at this level of talent.