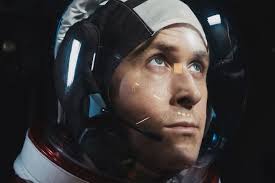 The opening sequence of director Damien Chazelle’s big screen adaptation of the book on the life of Neil Armstrong by James R. Hansen perfectly sets the tone for the film with respect to its subject matter and meditations generally on the nature of spaceflight.  A NASA test pilot in the early 1960s, Armstrong (Ryan Gosling) suffers a mishap in the X-15 rocket plane he is flying as it bounces off the atmosphere.  In a historical context we the audience realise of course that he will not perish, but, nonetheless, the level of physical danger to his person is effectively conveyed.  This is a mortal man who can bleed; a hero-to-be who can suffer pain like everyone else.  The principal source of affliction in Armstrong’s life is of the emotional variety and it emanates from his young daughter’s death from a brain tumor – a loss which is relayed at an early point in the narrative.  Refusing politely to play with his remaining child on the day of the funeral, Armstrong retreats to a private room in the family house where he sobs uncontrollably.  It’s the first indication on the filmmakers’ part that this was a man who internalised much of his sorrow and anger. 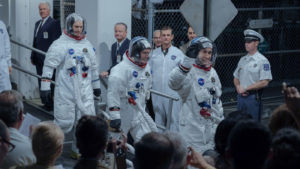 The Project Gemini spaceflight program which is launched in 1961 provides both a distraction and respite in this regard.  But in fairness to scriptwriter Josh Singer (Spotlight, The Post), there are many nuances to Armstrong’s character which are on display to suggest that he was more than just a man who followed protocol and silenced his inner voice.  When asked by the interview panel for Gemini if the recent death of his daughter might be a personal factor for him, he answers quite truthfully – yes, of course, it could be.  Even he has not learnt to suppress his emotions to that extent.  Elsewhere, and of much interest, Chazelle and Singer document the quotidian of family life for those who entered Project Gemini and moved to Houston as part of this NASA enterprise.  Some of the scenes here are reminiscent of 1983’s The Right Stuff.  The wives readily mingle and attempt to embrace the normal comforts and trappings of suburban life, such as they are; the husbands, meantime, drink cold beer on the porch.  The relationship between Gosling’s Armstrong and Jason Clarke’s Ed White is one of the more interesting dynamics of this section of the film.  A much more extroverted man in temperament, White cannot help but wonder at why his friend has never spoken about his daughter Karen.  When tragedy strikes by way of the ill-fated plugs-out test which killed the Apollo 1 crew (including White), Armstrong’s strongest reaction is to break the glass he is holding in his hand.  And yet he continues on with the task-at-hand fully aware of the peril it entails.  The following year, he is almost killed himself as he tests the Lunar Landing Research Vehicle. 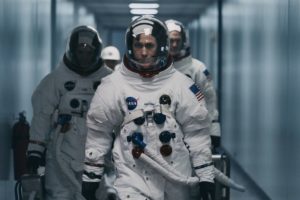 The climactic moment of the 140-minute film will not come as a surprise to anyone, but the focus of the filmmakers here is firmly on the personal story and the emotional toll it often exacts on those closest to the central character.  A pivotal moment in this respect occurs as the astronaut is about to depart the family home prior to the launch of Apollo 11.  Playing Armstrong’s first wife Janet, Claire Foy (in excellent form) confronts him with the gravity of a terrible eventuality which she feels should be conveyed to their two young sons – what if Daddy doesn’t return.  What is the true level of risk involved in this mission to land on the moon?  True to form, and consistent with his characterisation to this point, Armstrong treats the subsequent conversation with his family as if it were a press conference at mission headquarters.  He might not come back.  This may well be his last time speaking to them.  This is not a science fiction film in spite of the spacesuits and musings on physics, nor is it a heroic celebration in the mould of the aforementioned The Right Stuff or even 1995’s Apollo 13.  The cinematography of Oscar winner Linus Sandgren (La La Land) does not break into many wide shots during takeoff scenes and other such critical moments, but rather focuses on the faces and expressions of Armstrong and his fellow astronauts.  Elsewhere, another regular Chazelle collaborator – Justin Hurwitz – scores well with his musical accompaniment.  Whiplash editor Tom Cross meantime strengthens the aura of chaos and unease which must have been so redolent during these heady days of spaceflight during the 1960s.  These men were truly putting their lives on the line and we are left in little doubt about that.  Described by his own family as a reluctant hero, Armstrong was certainly a common man who was intrepid without seeking to be a paragon.  When set in contrast to Corey Stoll’s funny and loquacious Buzz Aldrin, the first man to walk on the moon does seem incredibly dour.  But Chazelle’s film constantly reminds us that this is an ordinary person manfully attempting to cope with some extraordinary circumstances.  In the lead roles, both Gosling and Foy fare very well and they are capably supported by the likes of Clarke, Stoll, Kyle Chandler and Shea Whigham.  A film about a flawed hero which is infused with a strong streak of gritty realism and which, sensibly, approaches its subject matter with more than a smidgen of historical perspective.