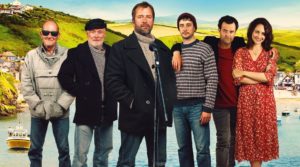 Based on the true story of a group of Cornish fishermen from Port Isaac who were discovered by a major record label and achieved a top ten hit with their debut album of traditional sea shanties, Fisherman’s Friends seeks to draw upon some very familiar formulas and tropes which have been utilised in previous British films such as 1983’s Local Hero and 1997’s The Full Monty.  The central premise is quite simple really and with few twists and turns.  On a lads stag weekend in a relatively remote fishing community in Cornwall, Danny (Daniel Mays), a music executive from the big smoke of London is conned into signing a group of shanty-singing fishermen who moonlight with their a cappella performances.  The men in question – who are both fishermen and lifeguards – are traditional in their way of lives and long-established in their chosen livelihoods.  Danny – being the fish-out-of-the-water of the piece – of course is not.  Left without a lift home and struggling to find a half-decent mobile signal, the fast-living manager soon finds himself enamoured by the more simple lifestyle which is based upon an inherent sense of camaraderie.  It helps also that Danny is physically attracted to Alwyn (Tuppence Middleton), the daughter of one of the fishermen Jim (James Purefoy). 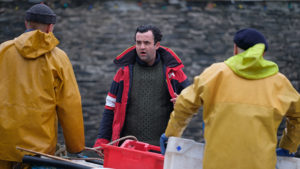 There’s nothing vaguely subtle about Chris Foggin’s 2019 comedy-drama film (which is based loosely on the true story of the Fisherman’s Friends unlikely rise to a modicum of stardom a decade ago), but that is not necessarily to its detriment.  The film does have a well-worn feel to it and its narrative thread is hardly innovative.  Cynical and self-serving at first, Danny soon comes to appreciate the intrinsic values of the community in which he is effectively stranded after his friends take off.  There is mistrust on both sides of the fence and confidences have to be fought for.  Jim – the self-appointed leader of the group – doubts Danny’s word and his face value.  The lure of a wider audience is appealing to some, but not to all.  On a more personal level, Jim’s daughter Alwyn – a separated woman with a young daughter – is wary of Danny’s romantic advances.  And Danny himself finds that he has to take a leap of faith both professionally and on a more fundamental level.  In the mould of the aforementioned The Full Monty, Fisherman’s Friends has, as one of its central themes, the idea that there is a consequence to actions even when taken outside the realm of normal circumstance.  Nothing is ever truly in a vacuum and lives are irrevocably changed by deeds and decisions.  On that very note, the audience is left in little doubt as to what the selling of the local pub to a thrifty businessman may entail.  Established modes of life may be deeply rooted, but they are ultimately vulnerable and at the behest of the march of time.  Although an island onto itself, the Cornish community must also eat and sleep like everyone else.  The group’s eventual decision to take on Danny as their manager demonstrates that they too have bigger dreams and greater aspirations beyond the mere quotidian. 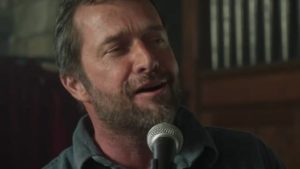 Foggin’s film is certainly not the most remarkable of its kind, nor does it possess the charm and aura of Bill Forsyth’s superior Local Hero from three-and-a-half decades ago.  Some of the scenes feel hackneyed and the set-ups telegraphed.  When Alwyn suspects that Danny’s interests many not be as altruistic as she’d believed, the reaction is more than a little predictable.  The film’s eventual denouement is also somewhat forced and – dare I say it – convenient.  But the central performances make up for these defects, in particular that of Purefoy, David Hayman and Dave Johns (the latter two who play older members of the musical ensemble).  The location scenes in Port Isaac are fairly well realised and there is an amusing sidebar as the singing fishermen visit the metropolis of London in their quest for a record deal.  It’s not going to change lives or alter mindsets greatly, but Fisherman’s Friends is an agreeably diverting piece which will not offend and does manage to entertain on the whole.  And the songs are appropriately hearty and delivered with more than a smidgen of gusto.