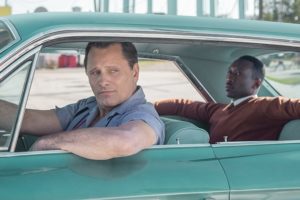 The premise which informs Peter Farrelly’s Oscar-nominated road movie is a very simple one in essence.  Two men from very different backgrounds – both ethnic and cultural – are thrown together for a period of time at close quarters.  Italian-American bouncer (and subsequent actor) Tony ‘Lip’ Vallelonga (Viggo Mortensen) is a slightly unpolished family man on the look-out for some gainful employment whilst the nightclub in which he plies his trade is closed for renovations.  Don ‘Doc’ Shirley (Mahershala Ali) on the other hand is a cultivated black pianist who lives at a very exclusive New York City address.  Committed to an eight-week tour of the American Mid-West and Deep South, Shirley is in need of a driver who can handle some of his affairs as well as offer an added degree of security in locations which may well prove to be racially prejudiced.  Based on his innate skills as a sometime heavy, Tony appears to fit this bill perfectly.  Following some minor negotiations regarding money, the two men hit the road with the two other members of Shirley’s musical trio in tow.  An important proviso which Tony has laid down is his wish that he be back with his wife and family in time for Christmas Eve. 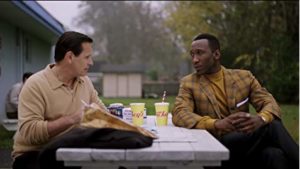 Directed by Farrelly from a script written by himself, Brian Hayes Currie and Vallelonga’s own son Nick, Green Book is at heart an uncomplicated slow-burn story about two men bonding in unusual circumstances against the backdrop of early 1960s America.  To be precise the year in question is 1962 and the historical significance of the times is not ignored by the filmmakers.  The fact that much of the drama which occurs takes place in the Deep South should come as no surprise to any viewer.  The Green Book of the title refers to an annual guidebook for African-American travellers which advised on motels and restaurants which would be of a benign disposition to men and women of colour.  Lest we forget that this was still the era of the Jim Crow laws in many of the states which the central characters in the film traverse.  In one instance, for example, Don is refused the use of the lavatory by the wealthy white patriarch who has employed him to entertain his guests.  Much later in the movie a similar situation occurs when the talented pianist is refused entry into the whites-only dining room of the country club venue at which he is scheduled to perform.  The message of the story and the film couldn’t be less ambiguous: many of these places were simply stuck in time adhering to practices and codes which were completely bigoted.  As the film progresses, the initially indifferent Tony is appalled by the treatment he sees meted out to his employer and gradual friend.  The pivotal moment of the entire piece takes place on the road (appropriately enough) during a downpour as the two men argue about which one of them is more in touch with his natural environs.  The upshot is a superbly-played encounter in which Ali’s character bemoans the fact that he belongs in no world so to speak – his sophistication and upper class trappings have alienated him from the people of his own race whilst the colour of his skin has prevented his true acceptance by white people. 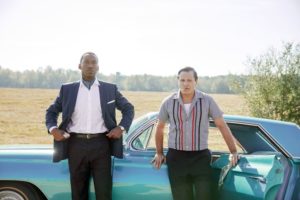 There’s nothing incredibly remarkable about all of this and an inherent feeling that this particular lesson has been relayed to us before looms at all times.  More akin perhaps to Driving Miss Daisy than other films concerning racial discrimination, Green Book is certainly not gritty in its style and approach and the method employed here could hardly be described as heavy-hitting.  But there is – as I previously suggested – a slow-burn effect in all of this which serves to endear the two central characters to us and, thereby, elicit feelings of empathy and compassion with regard to their respective positions.  A physically bulked-up Viggo Mortensen has seldom been better as the sometimes crude but essentially decent Tony – a man whose diction and letter-writing skills Don seeks to improve.  The on-screen sparring which regularly takes place between himself and his temporary employer is a genuine delight to behold and often places Green Book in the realm of comedy (let’s not overlook the fact that Peter Farrelly and his brother Bobby are the pair responsible for stand-out slapstick efforts such as Dumb and Dumber, Kingpin and There’s Something About Mary).  As Shirley, Mahershala Ali once again proves what a truly accomplished and subtle actor he is.  The Oscar winner is currently on track to win his second golden gong in three years and Mortensen is also fully deserving of his nomination for Best Actor.  Bereft of their special presence, Green Book might well be a serviceable message movie with some interesting sidebars concerning its epoch and settings.  With central performances of this merit, it is something else again – a movie with real heart and soul which should linger after the final frame has passed.