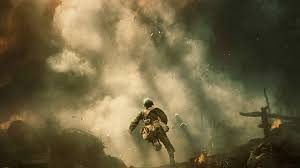 Mel Gibson’s war drama concerning Desmond Doss, the first conscientious objector to receive the Medal of Honour, is far from being the most understated film you will likely see in the cinema this year, but it is nonetheless a stirring testament to a remarkable man who performed heroics well and truly above the call of duty.  Gibson begins his visual account with countless recreations of carnage and balletic ballistics as the battle for the titular Hacksaw Ridge (the Maeda Escarpment) on Okinawa reaches a climax.  Squeamish viewers be warned at this point and, indeed, later on in the film – if you’ve seen some of Mel’s previous efforts behind the camera (such as Braveheart and, most especially, The Passion of the Christ), then be under no illusions as to the nature of war he depicts.  Human torsos are torn apart with ferocious abandon, contorting bodies enter and dance across the frame in bright orange flames, bullets whizz here and there with bone-shattering effect.  The Oscar-winning director is intent on making us understand the relentless bloodletting that is involved in close combat and then some.  How could a pacifist who refused to bear arms possibly survive this he asks.  The camera then picks out a bloodied Desmond Doss (Andrew Garfield) as he is borne away on a stretcher. 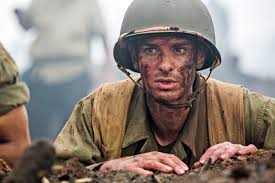 The story goes back in time then – some 16 years before – and relates how a young Doss came by such fervent conviction.  He has a troubled World War I veteran Dad (Hugo Weaving) who drinks too much and laments the comrades-in-arms and friends he lost in the Great War.  Dad is none too happy when Desmond’s brother Hal enlists to play his part following Pearl Harbor.  Matters are further compounded when Desmond himself elects to become a combat medic.  We are now 15 years later and the twenty-something Doss has found himself a sweetheart in the form of a pretty nurse (Teresa Palmer).  She too has reservations about his decision to follow his brother into the theater of conflict, but makes him promise to marry her.  With an exemplary smile on his face, Desmond travels to Fort Jackson in South Carolina for basic training.  But here much adversary awaits him.  His superior officers (chief among them a stony-faced Vince Vaughn and an unyielding Sam Worthington) balk at his Seventh-day Adventist beliefs.  Many harsh words are exchanged and the virile company is turned against the stoic outsider.  A trial ensues and a court martial beckons.  But Doss of course gets to go to war.  If he hadn’t, there wouldn’t be much of a story to tell. 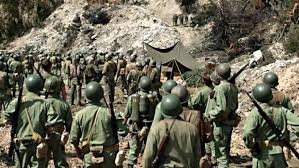 The Pacific theater of WWII is the film’s next stop and Gibson places us firmly in the heart of battle.  My words of warning above continue to apply.  Following the first major engagement atop the aforementioned escarpment comes one of the film’s best scenes as Doss strikes up an unlikely rapport with Smitty (Luke Bracey), one of his chief tormentors from Fort Jackson.  When the latter is killed the next day, and the American forces driven back, the remaining Doss prays for guidance, which comes in the form of injured men crying out for help.  The unarmed but intrepid medic rushes forward into the fog of smoke and chaos of debris and blood.  In total he would go on to rescue some 75 men.  Gibson and writers Andrew Knight and Robert Schenkkan choose (quite logically) to distill his actions down into a much shorter time period than in historical actuality.  The dramatic effect is no less weightier as a result.  Doss was a bona fide hero who risked his own life to save many others.  No firearm was necessary here.  The man had guts through and through. 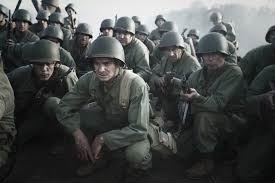 Detractors of the film will no doubt point out the very obvious religious allusions which Gibson peppers throughout the film.  Indeed, there is nothing remotely subtle going on here.  Rupert Gregson-Williams’ score hits the high emotional notes as one act of valour is followed by the next.  Doss is shot in slow motion as he bats away grenades tossed by the treacherous enemy.  Elsewhere, he tends to the wounds of one of the Japanese he comes across in a network of underground tunnels.  His exploits over the course of a day and night are referred to by Worthington’s character as a ‘miracle.’  The latter prevails on the young man to lead his compatriots back to the top of the ridge in spite of it being his Sabbath day.  At the film’s end he is lowered from a height in a very Christ-like posture.  Gibson’s design is not to be low-key about any of this.  Rather it’s highly visceral film-making with an unmistakable punch.  In the central role of Doss himself, American-British actor Andrew Garfield does just fine and emotes the character’s intense and devoted ardour.  It’s a performance that has garnered an Oscar nomination, along with nods for Gibson, the film and in three other technical categories.  On the whole Hacksaw Ridge is a fine war film with a quite unique participant at the centre of its narrative premise.  But do expect lots of blood and guts on display here.  This aspect of war is something that the filmmakers have not shied away from in this particular instance.