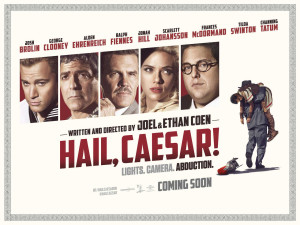 The Coen Brothers latest offering is something of a tease from the boys in that we get many of the familiar elements and character-types that populate their films, but it never quite coalesces to become something more than the sum of its parts.  There are some marvellous vignettes and set pieces, some astute asides about the dream factory, and the true nature of how it once wielded control over its brightest stars, but, ultimately, these are stand-alone pleasures propping up a central story that requires more focus, more drive.  Set in Hollywood in the 1950s, Hail, Caesar! will appeal to hardened Coen fans in the first instance as its fictional Capitol Pictures is the same milieu they employed in Barton Fink many moons ago.  Josh Brolin plays Eddie Mannix, the studio’s head of physical production, whose job is to fix problems and deal with any number of headaches arising on the backlot and soundstages on any given day.  There are many of these including Scarlett Johansson’s star who is facing the impending scandal of being both pregnant and unwed; Ralph’s Fiennes’s prissy director who does not take kindly to the B-western star who is foisted on him for his period drama; and not least Hail, Caesar! itself which the studio wishes to push as its grand prestige piece for the season (remember the 1950s was after all the era of such biblical epics as Quo Vadis, The Ten Commandments and Ben-Hur).  The leading actor in this swords-and-sandals variant, matinee idol Baird Whitlock (George Clooney) is a loveable lug really, but he’s clearly not the most discerning, and when a group of communist ex-writers (presumably victims of the Hollywood Blacklist) kidnap him he does not appear overly discommoded, indeed his only real concern is that Mannix may have some harsh words to impart upon his return. 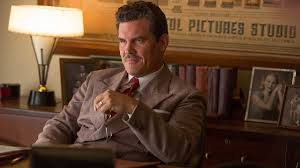 The latter is a charming tough guy who will do what’s necessary to protect the studio and its precious commodities.  But there are contradictions in his frame too.  He will think nothing of slapping an actress around for taking part in an unsanctioned photo session, but does feel wracked with guilt about smoking on the sly behind his wife’s back.  He’s also being courted in the background by an aerospace company called Lockeed who enticingly promise him that he will no longer have to shoulder as many crackpot problems as his current employment burdens him with.  Throw into the mix Tilda Swinton’s twin sister rival gossip columnists snapping at his heels for juicy titbits, and it’s easy to understand why Eddie may be having some doubts about his own direction in a world where so many others are looking to him for guidance, as they constantly come a cropper in their professional and personal lives.  Needless to say, you won’t be very surprised by what path Eddie eventually chooses.  He has the studio and all its attendant trappings and absurdities in his blood and, naturally, he determines to get the leading man back to the set of the Roman epic.  But in the meantime we also see how practicalities dictate a short-term solution as a lesser actor is employed to shoot pick-ups for the missing star.  This was the Hollywood of old which churned out films on a conveyor belt basis – lets not forget that. 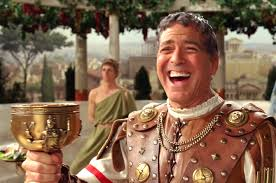 Hail, Caesar’s strengths lie in the sidebars the brothers point out to us and the various oddities that arise in this manufactured world.  There’s a terrific swimming sequence involving Johansson’s character and an impressive song-and-dance routine featuring Channing Tatum and some sailor buddies.  Hail, Caesar! itself more than pays homage to the vogue for biblical epics in the 1950s and 1960s – the most famous of these perhaps, Ben-Hur, provides it with more than a few references and knowing in-jokes.  Watch out in particular for the nod to the famous ‘No water for him’ scene from the William Wyler film and you’ll see what I mean. That being said, Hail, Caesar! is far from vintage Coen Brothers in that it never quite delivers on its promise.  There are some very clever reflections on the old Hollywood system indeed, but such individual compositions do not add up to an entirely satisfying story, or conclusion for that matter.  In lesser hands Hail, Caesar! would feel like a fairly pleasant diverting affair, but the problem is that we have come to expect so much more from the Coens, and they have rarely disappointed.  It’s three years since their previous directorial effort – Inside Llewyn Davis – so here’s hoping they do not allow as lengthy a gap in their filmography again.  As for this present one, a slightly better than pass grade, but one hopes for a return to form the next time around.  A more robust central story fellows I would dare suggest.  That’s what has made your great films in the past so great.