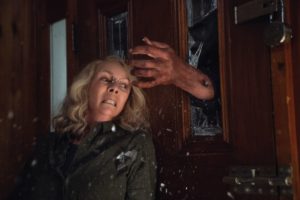 The good news about the new Halloween film from director David Gordon Green is that it effectively serves as a retcon of all previous sequels in this particular cinematic franchise.  Those of us who have sat through some of the more excruciating entries in the series – such as 1988’s Halloween 4: The Return of Michael Myers or 1995’s Halloween: The Curse of Michael Myers – can, therefore, breathe a collective sigh of relief.  According to Green’s new film, these stories and narrative trajectories never really happened.  The slate is wiped clean as far as the storytellers are concerned.  Of greater significance is the decision to also excise the events of 1981’s Halloween II.  Laurie Strode and Michael Myers are no longer said to be siblings.  40 years after the events of John Carpenter’s seminal Halloween (1978), the not-so-lovable lug with a penchant for sharp objects is residing in a rehabilitation hospital where he stares off into space in a pointed refusal to communicate.  Even the slightly manic curiosity of two podcasters cannot reach him in this seeming trance.  Michael remains an epitome of pure evil in the immortal words of Dr. Sam Loomis (Donald Pleasence). 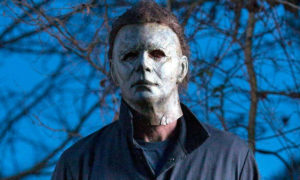 One of the central problems from a storytelling point of view is that Michael’s apparently obsessive desire to return to Haddonfield, Illinois (the setting for the original films) is no longer clear in the absence of a familial relationship with Laurie.  Sure, it’s the place where he murdered his sister all those years before, but the link seems somehow tenuous now.  And why exactly does he wish to off Laurie after four decades of mute contemplation?  The former babysitter who proved such a worthy foil in the past has more than gone off the rails for her part.  Suffering from long-term PTSD and a predilection for the hard stuff, Laurie has managed to alienate her own daughter Karen (Judy Greer) and her husband Ray (Toby Huss).  Only Laurie’s granddaughter Allyson (Andi Matichak) feels some modicum of sympathy for the old lady.  The general consensus is that the veteran survivor is delusional and beyond paranoid.  Somewhere deep in the woods outside Haddonfield, she has constructed for herself a domicile that doubles as a fortress.  In her own words she has waited all of this time in the crazed hope that Myers will escape one day and seek her out.  It will come as no great surprise to those who have not yet seen this film to learn that this eventuality comes to pass.  One convenient transfer to a new facility later and Michael is once again on the loose.  This – we are told – is what he has been waiting for.  A pivotal moment in the proceedings arrives as he dons that iconic mask once more. 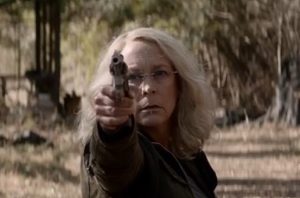 The new Halloween film is without doubt the best in the series since – probably – Halloween itself and fans of the slasher genre generally will not be disappointed.  Green and his fellow writers – Jeff Fradley and Danny McBride – debunk some of the myths from previous Halloween films with an innate sense of play and choreograph the tenser moments with a fine sense of timing and a smidgen of atmosphere.  The whole thing pales in comparison to Carpenter’s master-work, of course, but the filmmakers here deserve some praise for giving the franchise a sense of purpose and authenticity once again.  That having been said, the film is not without its many flaws.  For one thing, there are far too many extraneous characters who amble into the plot before being – ahem – dispatched by the relentless Michael.  The final moments of the film – which, naturally, take place in Laurie’s humble abode are also something of a let-down; there’s nothing particularly innovative with respect to a scene involving Jamie Lee Curtis wandering around a darkened house as she seeks out her murderous adversary.  In fairness to the filmmakers, they do avoid the obvious cliche of a twist ending, but what about those rumours of a sequel in the works.  Is Michael really dead at the finale?  How many times have we asked that question in the past and received a hackneyed response?  Plus points include Curtis’s typically feisty performance in the central role, as well as sturdy support from the likes of Judy Greer and Will Patton.  One for the fans undoubtedly, but those of us with less sentiments for some of those awful sequels will not complain at length.  Which is much better than we had a right to expect after all.