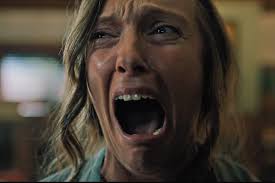 Enthusiasts of the supernatural horror genre are in for a real treat, because here surely is one of the best screen offerings in recent years, a film which delivers suspense and genuine terror in equal measure.  An obituary at the beginning of Hereditary perfectly sets the tone for things to come.  A 78-year-old woman by the name of Ellen has died.  At her funeral, her daughter Annie Graham (Toni Collette) offers up a eulogy which more than suggests that the departed was not exactly the warmest of individuals.  When the family return to their rustic domicile, Annie asks her husband Steve (Gabriel Byrne) if she should feel sadder concerning her loss.  The room which was previously occupied by the troubled and troubling matriarch is eventually locked.  As you might expect, the family is trying to process the event and move on.  But there are tensions in the present time and lingering traumas from the past.  Annie and Steve’s eldest Peter (Alex Wolff) is attempting to break the mould, but his weed habit will soon have momentous indirect consequences.  The couple’s 13-year-old daughter Charlie (Milly Shapiro) is as eerie-looking as Damien in The Omen.  And Charlie is beset by medical ailments as we soon learn.  A severe case of anaphylaxis is coupled with an odd disposition which causes her to be socially withdrawn and somewhat mercurial.  The decapitation of a dead bird in the grounds of her school is director Ari Aster’s way of presaging one of the film’s most jaw-dropping moments.  As feature directorial debuts go, this is as close to perfection as it gets.  On writing duties here as well, Aster has managed to fashion a piece which remains in the memory long after the lights go up. 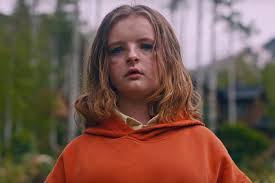 Less is more as they say, and I won’t reveal the circumstances of a pivotal moment which occurs in the film’s first half hour.  Suffice it to say that a grisly shot on a remote roadway by the light of morning is an indelible image many a viewer will take home from this one.  Aster effectively builds the tension at first by deftly showing us the gradual disintegration of the family unit.  Truth be told, there were many fissures in place long before the aforementioned Ellen shuffled off her mortal coil.  Annie, a diorama artist, is working on her latest exhibit which appears to depict scenes from her own family life.  With a deep-seated air of reluctance, she attends a support group for the recently bereaved, whilst lying to her husband in the process.  Her own family history as backstory is one which effectively portends some very bad things to come indeed.  When she befriends one of the group members Joan (the superb Ann Dowd), Aster posits the possibility that there may be a very thin line between dreams and reality.  Annie has a history of sleep-walking; on one such occasion, her children had more than just cause to feel threatened by her.  A chasm has duly formed between herself and her son, and recent events are merely serving to accentuate this. 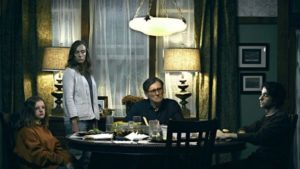 A film which starts out as an apparent treatise on the nature of loss soon becomes one of domestic breakdown and unraveling family ties.  The growing sense of menace in the air only becomes truly manifest in the final act, but, by then, Aster has already presented us with a piece which is hugely unsettling and disconcerting.  The feeling that we are watching figures from one of Annie’s very own miniature scenes is perfectly captured in the film’s very first set-up.  The family home is gloomily lit by cinematographer Pawel Pogorzelski and we can even forgive Aster the cliche of including the proverbial creepy attic in the proceedings.  In the final third of the film Aster ups the ante and draws us more broadly into the realms of a proper supernatural horror film.  Bodies twist and contort and barely audible sounds populate the soundtrack.  But the writer-director – to his great credit – does not resort to cheap shock-tactics or contrived elucidations.  The big reveal – as we are propelled towards the film’s denouement – is something which has been hiding in plain sight all along and Aster delivers this with the consummate skill of a William Friedkin or Roman Polanski.  Even commonplaces such as a burning body or a levitating corpse do not detract from the infusion of freshness which the young director has wrought here. 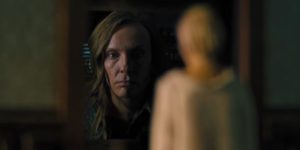 Aster’s cause is all the more enhanced by a quite flawless cast.  Consigned very much to a supporting role in this fare, Byrne is appropriately careworn and quietly distressed by the gradual disintegration of his family.  Alex Wolff, meantime, is more than sufficiently hangdog in his respective role; a teenager who simply wants to cut loose, but who is weighed down by the tragic events occurring all around him.  As the sinister-looking Charlie, Milly Shapiro delivers a performance which is genuinely unnerving.  Viewers who have already seen Hereditary might understand my equating her character and screen time here to that of one Janet Leigh in Hitchcock’s Psycho.  For those who have not yet ventured to their local cinema, I shall say no more.  That would be a spoiler too far.  Unsurprisingly, the film belongs to Toni Collette and the Australian actress has rarely been better.  Collette’s performance is on a par with that of Ellen Burstyn in The Exorcist and, if there’s any justice, she should receive some modicum of recognition come awards season.  The moving player in all of this however is undoubtedly Ari Aster and we look forward to his next cinematic offering.  Meantime, catch this one as soon as you can – a slice of the macabre which more than lives up to its hype and billing.