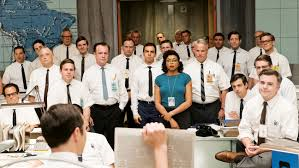 The early 1960s Space Race is told from a very different but highly important perspective in director Theodore Melfi’s entertaining and heart-rending biographical drama.  Based on the book of the same name by Margot Lee Shetterly, Hidden Figures tells the true tale (some historical inaccuracies aside) of African-American mathematicians who worked at NASA during this pivotal phase of the competition between the two Cold War rivals.  Katherine Goble (Taraji P. Henson) is one such lady employed as a so-called ‘human computer’ at the West Area Computers division, a segregated group in NASA’s Langley Research Centre.  Working alongside her are nominal supervisor Dorothy Vaughan (Octavia Spencer) and aspiring engineer Mary Jackson (Janelle Monae).  The three women are close outside the work place.  Mary and Dorothy are intent on setting the widowed Katherine up with handsome National Guard officer Jim Johnson (Mahershala Ali).  Katherine has three children from her marriage and is not entirely averse to the idea, but she visibly balks when the would-be suitor articulates some doubt concerning the mathematical aptitude of a female.  This is one of several preconceptions which Hidden Figures quite gracefully addresses. 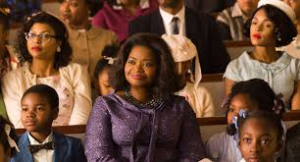 Katherine is subsequently assigned to the Space Task Group (a working group of NASA engineers) under the stewardship of the somewhat curt, but ultimately fair, Al Harrison (Kevin Costner).  In this ostensible male environment Goble finds that she is up against manifestations of racial prejudice and male chauvinism.  Perceptible exception is taken when she helps herself to a cup of coffee from the same pot as the other so-called geniuses.  She also has to jog back and forth on the campus in order to access the bathroom for persons of her colour.  The other two ladies have personal battles of their own as well.  Dorothy seeks advancement in the guise of being named supervisor as this is a role she is already fulfilling in every way but formal title; however, her rather obdurate boss Vivian Mitchell (Kirsten Dunst) does not tend to agree.  The point Melfi and co-screenwriter Alison Schroeder are making here is not a subtle one, but pertinent nonetheless.  Institutional conventions are just as intransigent an entity as those of societal ones.  Mary, similarly, appears to be battling inflexible powers in her bid to pursue an engineering degree at an all-white school. 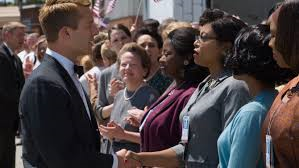 There is progress and reversion and Melfi keeps it all moving at an appropriately spirited pace.  Katherine gains admittance to confidential meetings in which she wows her male colleagues with her dazzling equations; however, subsequent reports are credited solely to the head engineer instead of the real talent on the team.  Dorothy also makes personal advancement in the form of mastering the recently-installed IBM 7090.  An altercation occurs at a local library however when she wanders into the whites-only section to borrow a book on programming language.  Mary’s eventual admission into a night class is met with a hushed silence.  These ladies are pioneers without doubt, but they are also individuals with families and personal obligation.  In a telling scene – following Yuri Gagarin’s game-changing orbit in space – Harrison instructs his subordinates to phone their families and inform them they will be working much lengthier hours from now on.  One such telephone is passed to Katherine and the implication seems to be clear – she above all will be required to make even greater sacrifices in a quite often thankless and male-dominated environment. 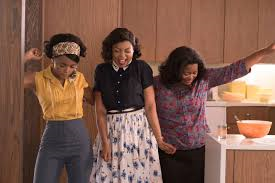 But, of course, there is much hope at the very core of Hidden Figures and oodles of feel-good factor.  The score by Hans Zimmer, Pharrell Williams and Benjamin Wallfisch swells at all such opportune moments and offers an aural guide to complement the visuals of cinematographer Mandy Walker.  A slammed control room door in Katherine’s face is quickly opened by the increasingly benevolent Harrison.  Another tear-jerking scene has Jim propose to her opposite her kids and Mom.  The ruse is quite obvious throughout, but the overall effect is lovingly delivered and, ultimately, heartfelt.  This is indeed a hidden story that deserves to be told and is long overdue such a cinematic treatment.  Some three decades on from the screen version of The Right Stuff (which also concerned Project Mercury, albeit from an entirely different viewpoint), these wonderful figures do indeed deserve to be universally hailed.  An epilogue informs us that the still-living Katherine Goble Johnson was awarded the Presidential Medal of Freedom in 2015.  Proper recognition indeed and this very fine and touching film should go some length towards preserving her legacy and that of her friends and colleagues from those heady space days.  Exemplary performances from the cast I should mention as well with Henson and Spencer standouts in particular.  In the supporting cast Costner fares well too and Kirsten Dunst barbs to good effect with Oscar nominee Spencer.  The Screen Actors Guild Award for Outstanding Performance by a Cast in a Motion Picture was well deserved here.