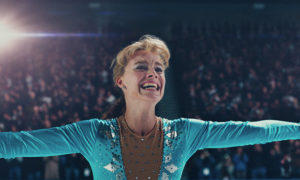 ‘America – they want someone to love.  They want someone to hate,’ muses Margot Robbie’s Tonya Harding towards the close of director Craig Gillespie’s biographical black comedy.  In the early days of 1994 Harding was most certainly a divisive figure in the American public’s eye.  A January 6th attack on her chief rival, figure skater Nancy Kerrigan, was making all the headlines and Harding’s involvement in this was murky at best.  The impending Winter Olympics in Lillehammer were of secondary importance to a media frenzy which, in Harding’s own words, made her the most famous American citizen after Bill Clinton.  ‘I was loved for a minute, then I was hated,’ she contemplates in a voiceover as she embraces her notoriety – ‘Then I was just a punchline.’ 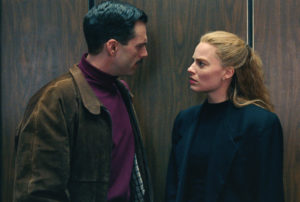 Gillespie structures his film in a documentary style which is interspersed with pieces to camera as the central drama of Harding’s life unfolds before us.  Brought to an ice rink by her chain-smoking and rather callous mother LaVona (Allison Janney) at the tender age of four, Harding was a competitor who had to street-fight even when she wasn’t on the ice.  Her mother was abusive towards her and pushed her to be the best at all costs.  One telling scene has Janney pay a spectator to verbally abuse her daughter in order to elicit a better performance in the rink.  LaVona constantly reminds Tonya of the sacrifices she has made to pay for her tuition.  She withdraws the girl from school so that she can train more.  Her motivation in all of this is ambiguous – it’s never exactly established why she wanted such a life for her daughter; nor does she appear to take any great pride or joy from Tonya’s achievements as the young woman begins to establish a strong reputation in the sport in the early 1990s. 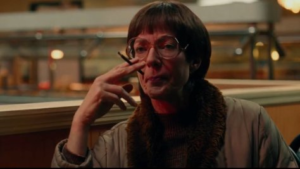 The white trash reputation which Harding perpetuated all the more so with her choice of performance music and home-made costumes was frowned upon by judges and so-called purists in the figure skating world.  In one scene, an enraged Harding berates the judging panel for the low scores she has received; in another moment she is pointedly told that her image jars with the wholesome one which the sport seeks to portray to the American public as a whole. Harding’s own personal situation is not helped when she meets and marries Jeff Gillooly (Sebastian Stan) at a relatively young age (‘you fuck dumb, you don’t marry dumb,’ a typically abrasive LaVona remarks).  Gillooly soon becomes a physical abuser far worse than Tonya’s mother.  Countless restraining orders are applied as the couple split and reconcile many times over.  Breaking the fourth wall on several occasions, the strong-willed protagonist comments upon the frequent abuse which was meted out to her – ‘Nancy gets hit one time and the whole world shits – for me it was an all-the-time occurrence.’  The ‘incident’ as it’s referred to by many of the characters who give interviews to the camera does, of course, occupy much of the film’s 115-minute running time.  But Gillespie and screenwriter Steven Rogers cleverly imbue the cause and circumstances with shades of grey.  Harding herself is emphatic in her statement that she had no prior knowledge of the rather bumbled attack which took place on the 6th January 1994.  Gillooly also argues that he had not wished for the tormenting of Kerrigan to move to such a physical level.  We are not quite sure who is to blame, but we are left in little doubt as to the inept planning and execution of the assault which took place in Detroit.  Paul Walter Hauser is effectively comedic as Gillooly’s delusional friend Shawn Eckhardt who was eventually prosecuted in the Kerrigan attack.  The characters on display here are not very bright people, and yet Gillespie and Rogers manage to elicit some modicum of sympathy for them.  They had their fifteen minutes of fame, albeit with a distinct tinge of infamy. 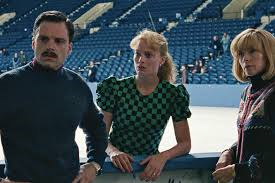 The greater part of our empathy lies with Harding herself and Margot Robbie’s robust and semi-tragic central performance is certainly something to behold.  Nominated for the Oscar for Best Actress in a Leading Role, Robbie shows her considerable versatility in the part and rehabilitates Harding for the screen in a way few of us could have or dared to anticipate.  In support Sebastian Stan is appropriately edgy as Gillooly; Julianne Nicholson offers understanding and some comfort as Harding’s coach Diane Rawlinson.  The scene-stealing performance of the film belongs to the Oscar-nominated Allison Janney as LaVona Harding – monotone in her conversation and criticism, LaVona is a deplorable matriarch of complex dimensions.  When Tonya hugs her in a pivotal scene, LaVona’s arms barely embrace her daughter.  The phrase tough love takes on new meaning in this character.  How could a person be so committed to a child and yet so seemingly heartless in equal measure? 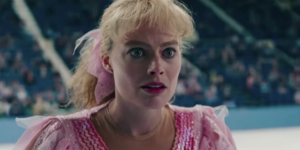 I, Tonya has much to say about the media and attendant hysteria which took place in the wake of the Kerrigan attack.  The feverish attention is temporary of course and some of the main players even bemoan its absence as it moves on to the next sensation.  A news report on OJ Simpson in the background reminds us of the era I, Tonya is set in as much as it comments on the fleeting nature of fame generally.  In a postscript, the pseudo-heroine outlines her attempt to move into the arena of boxing as a means of sustaining her name and ill-repute.  Gillespie closes with a perfectly realised juxtaposition of Harding’s famous triple axel jump and her short-lived exploits in the ring.  His film succeeds on every level in its depiction of a resolute young woman who was treated harshly within and outside the environs of her chosen sport.  A class act about a competitor who, with the passage of time, is deserving of much reappraisal.