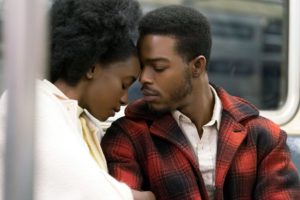 Director Barry Jenkins’s third feature film is a poignant love story with the backdrop of interracial tension in 1970s American society informing its contextual basis.  Based on the 1974 novel of the same name by author James Baldwin, the premise of the narrative is simple but effectively articulated.  Childhood friends for much of their short lives, ‘Tish’ Rivers (KiKi Layne) and ‘Fonny’ Hunt (Stephan James) are deeply in love.  Presented for the most part in non-linear flashback, the screenplay adaptation by Jenkins reveals how their relationship has evolved to the present time.  The love which is shared by the couple is not the stuff of a sudden realisation or a climactic moment and Jenkins the director emphasises the slow-burn nature of the romantic bond.  The gentle pacing of some of the vignettes is further underlined by the gorgeous cinematography of James Laxton and the mellifluous score of Nicholas Britell.  Nothing is rushed in many of these scenes and – just as with his Oscar-winning Moonlight – Jenkins allows his camera to be fluid as it moves to and fro between characters.  But the perfect trajectory of Tish and Fonny’s story is drastically impeded when the latter is wrongly accused of rape.  In an almost serene voiceover, Tish explains how the matter of his innocence is beyond doubt based on his whereabouts on the evening in question.  Unfortunately for the young man, the alibis presented by herself and another man are not suitably robust in the eyes of the law.  Fonny is duly imprisoned and Tish can only now see him on the other side of a glass screen. 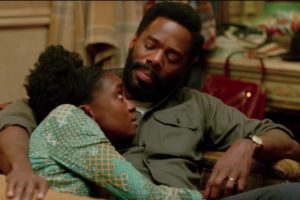 The central character soon discovers that she is pregnant and must broach the subject with her family members.  An early domestic scene establishes how close this family unit is in spite of the extenuating circumstances of Fonny’s incarceration.  The father (Colman Domingo) receives the news with good humour and the mother (Regina King) breaks out the expensive booze.  They decide to invite Fonny’s parents around to share their joy and we witness the flip side of the reaction as Fonny’s religion-fixated mother (Aunjanue Ellis) berates Tish for her part in this ‘sin’ as she designates it.  The point being made by the storytellers is as obvious as it is pertinent.  For every act of love and expression of support, there is equally a show of disdain and prejudice.  Fonny’s mother has never considered Tish good enough for her only son and resorts to contempt when she hears of the impending new life.  Such a narrow-minded perception stretches across ethnic lines and cultures and is laid bare by Jenkins as he presents it to other extents.  We see Fonny face off with a white policeman named Officer Bell (Ed Skrein) who is the very epitome of such a poisonous disposition.  It comes as no great surprise that Bell has played a pivotal part in securing Fonny’s conviction.  Other so-called pillars of society have played their part in this cruel story arc which Jenkins renders more universal through the film’s occasional meditations on the history of racial discrimination.  The woman at the centre of the accusation meantime has fled back to her native Puerto Rico.  A third act intervention on Fonny’s behalf by Tish’s mother does not have the desired effect.  But, ultimately, this is a story about the triumph of the human spirit in the face of unenviable odds and certain implacable characters. 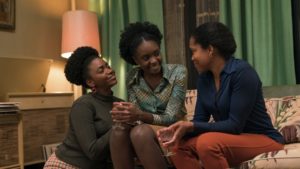 As with 2016’s Moonlight, Jenkins has assembled an exemplary cast who are a perfect fit with the material he engages.  As the young couple at the centre of the storm, KiKi Layne and Stephan James never hit a false note and are ably supported by the likes of Brian Tyree Henry and Diego Luna.  Teyonah Parris and Colman Domingo are well cast respectively as Tish’s sister and father, but the film undoubtedly belongs to the Oscar-nominated Regina King as Tish’s liberal-minded and compassionate mother.  Beautifully shot and masterfully acted, If Beale Street Could Talk is a telling meditation on the subjects of love, the power of the family unit and the detrimental force of racial discrimination.  It should have garnered more Oscar nominations than the three bestowed upon it (Best Supporting Actress, Best Adapted Screenplay and Best Original Score), but the critical kudos it has earned are more than well deserved.  The rise and rise of Barry Jenkins continues as he becomes one of the most potent voices in American cinema today.