Stalker films of yesteryear such as Single White Female and Scorsese’s The King of Comedy involved obsessive characters paying endless visits to residences and places of work before being politely asked to leave and, later on, escorted away by security personnel.  In Clint Eastwood’s Play Misty for Me and Adrian Lyne’s Fatal Attraction the dangerously imbalanced characters resorted to home invasions and, most infamously, rabbit casseroles.  Writer-director Matt Spicer’s Ingrid Goes West updates this particular genre with a contemporaneous spin.  Ingrid (Aubrey Plaza) is a lonely young woman who has recently lost her mother.  To fill the void in her life, she buries her head in her phone and immerses herself in the world of Instagram and social media influencers.  One of these, Charlotte (Meredith Hagner), has peeved the Pennsylvanian by simply choosing to ignoring her countless messages and expressions of support.  Following an outburst at the latter’s wedding, Ingrid is temporarily committed to a mental facility where she learns truisms and hackneyed expressions as if by rote.  She emerges a less damaged person, but the cracks in her facade are still manifest.  And when she comes across another Instagram star, by the name of Taylor Sloane (Elizabeth Olsen), Ingrid determines to head west to California where the latest object of her fixated attention resides.

A familiar pattern takes hold in Spicer’s film (which is part social satire, part black comedy) as Ingrid manages to insinuate herself into the lives of Taylor and her aspiring artist-husband Ezra (Wyatt Russell).  Kidnapping Taylor’s beloved pooch, Ingrid curries favour with the young couple.  They invite her to dinner and a tentative relationship soon blossoms into what appears to be a promising friendship.  The girls go on a road trip and get suitably intoxicated together on a mix of drugs and alcohol.  Taylor confides in Ingrid about her hopes and aspirations for the future.  But the life she leads is ultimately a quite vacuous one as Spicer and his co-writer David Branson Smith suggest.  In a later scene, an inebriated Ezra bemoans the fact that his wife has become such a social media darling.  In Taylor’s world the most inconsequential of details, the barest minutiae, is the source for her latest post on Instagram.  Everything must end in a hashtag in such a self-centered universe.  And worst of all, she is quite fickle with respect to her own emotional span and degree of mindfulness. 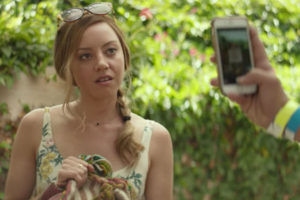 It would not be such a monumental spoiler here to reveal that Taylor soon tires of Ingrid and moves on to her next fad and opportunity for further enhancement.  These take the form of her returning brother Nicky (Billy Magnussen) and his latest squeeze Harley Chung (Pom Klementieff) who, herself, is a renowned fashion blogger.  As the spotlight on her fades somewhat, the eerily resourceful Ingrid comes up with a new scheme in order to sustain her proximity and relevance.  This involves wooing her so-called landlord Dan Pinto (O’Shea Jackson Jr.) who has more than a passing interest in Batman.  Grooming the rather bemused Dan, Ingrid encourages him to play her significant other, whilst also warning him against inane conversations concerning the caped crusader.  All appears to be going well until she overhears Taylor imparting the same secret she shared with her earlier to Harley Chung.  And when Nicky uncovers her ruse, and attempts to bribe her, we sense a denouement of sorts on the horizon.  The only question is: how far is Ingrid willing to go in order to stay within Taylor’s flimsy circle? 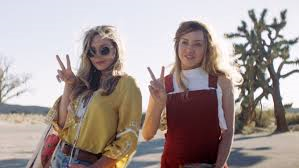 Your own personal proclivities towards social media may very well determine how you regard Ingrid Goes West, but the truth of the matter is that Spicer has concocted a daring and often cringe-inducing comedy which examines themes such as loneliness and despair as well as the overarching subject matters of instant fame and social media.  In the titular role, Aubrey Plaza embraces the traits of a woman who has not found her own position in society and appears to be without a true calling in life.  The reason for Ingrid’s compulsive behaviour is never elucidated, but she is, nonetheless, a strangely endearing character.  Pathetic is not an appropriate phrase here, but there is an undoubted pathos below the surface.  In support Olsen and Wyatt are also on fine form and O’Shea Jackson Jr. manages a particularly engaging turn as the essentially lovable Dan.  With shades of Patricia Highsmith’s The Talented Mr. Ripley permeating it, Ingrid Goes West is a sharp and biting satire which is both timely and thought-provoking and might translate best for those of us who do not have our heads stuck in our phones on a 24/7 basis.  With a smart and pleasing ending – which does not quite come full circle in an All About Eve way (go watch the film and you may see what I mean by this) – Ingrid Goes West more than has at this modern-day trend in a funny, insightful and near-vicious way.  Those of us of a slightly older generation and disposition may very well leave the cinema with a rueful smile on our faces.