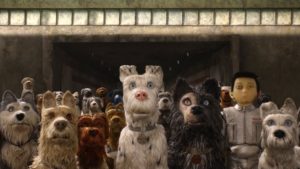 The premise of Wes Anderson’s latest cinematic offering is quite simple really, but, as always, the execution of that premise is typically deft, more than a little offbeat and tinged with a smattering of heart-warming nostalgia.  In a dystopian Japan of the near future, the position of man’s best friend has been unsettled and then some.  A dog flu virus has ravaged the canine population and a decree has banished all such furry creatures to the unfortunately named Trash Island.  The mayor of Megasaki, Mayor Kobayashi, is resolute in his stance.  A countenance that seldom changes during the course of the stop-motion animated film speaks volumes about Kobayashi’s draconian leanings.  Speeches are delivered to a faceless audience and edicts are signed without a moment’s hesitation.  Kobayashi is distinctly unmoved by reports that a cure to the virus may be close at hand.  Not even the pet of his orphaned nephew and ward, Atari Kobayashi, is given a free pass or exemption.  And so Spots (Liev Schreiber) becomes the first unsuspecting occupant of the aforementioned Trash Island.  A moment of genuine poignancy occurs as the still-caged animal sits alone in the inhospitable environs and hears a clap of thunder overhead.  Dog lovers beware.  You might just shed more than a tear for these cruelly exiled animals. 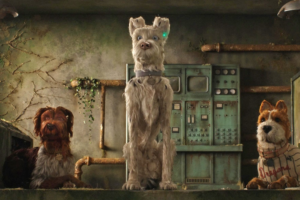 But hope abides and this is presented in the form of a young human who, himself, misses his beloved pet.  Crash-landing on the island, the intrepid Atari begins his personal quest for Spots.  Appropriately enough, he is aided by some of the dogs who have become reluctant residents there – Rex (Edward Norton), King (Bob Balaban), Duke (Jeff Goldblum) and Boss (Bill Murray).  A fifth dog named Chief (Bryan Cranston) is not so convinced by the kid’s motivation and his pluckiness.  A backstory is revealed which offers an explanation for Chief’s underlying mistrust.  Few viewers will be surprised to see him experience a change of heart towards Atari and humankind generally.  A burgeoning romance between the somewhat unpolished Chief and a female purebred named Nutmeg (Scarlett Johansson) will surely evoke some memories of Disney’s Lady and the Tramp for viewers. 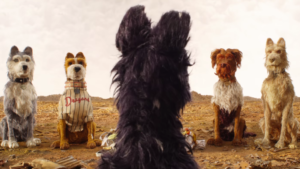 The animated visuals are a delight and the deadpan humour is in the vein of Anderson’s previous foray into stop-motion animation, namely 2009’s Fantastic Mr. Fox.  The close-ups and constant foregrounding of the dog characters are reminiscent of Sergio Leone’s spaghetti westerns.  The attention to detail in each and every frame is remarkable and a testament to Anderson’s attentive eye and meticulous artistry.  Cineastes will pick up on the references to the films of Akira Kurosawa and it’s no small coincidence that a theme from The Seven Samurai features on the playlist.  Regular Anderson collaborator Alexandre Desplat offers a typically eclectic selection of tunes which include his own original music as well as compositions by Fumio Hayasaka and psychedelic group The West Coast Pop Art Experimental Band.  Midnight Sleighride from The Lieutenant Kije Suite is employed to quite beautiful effect.  There are no half-measures here and the overall impression is that of creative people who are entirely in control of their medium.  The director of films such as The Grand Budapest Hotel, Moonrise Kingdom and The Royal Tenenbaums is a past master at this kind of entertainment.  Nothing is conventional.  The atypical and free-spirited are to the fore just like those shaggy creatures who are framed so strikingly. 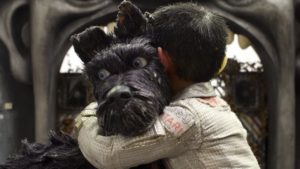 On a thematic level. Anderson has a few things to say about absolute rule and the dangers of a leader who seeks to impose his own ideologies and prejudices on the masses by way of pure scaremongering.  In our present-day world the parallels are plain to see and it does not behove this reviewer to point them out or even suggest figures in the body politic; astute viewers can do that all by themselves.  If anything, Anderson’s overall message may be read on a much more fundamental level – man’s best friend has been a domestic pet for centuries now and to turn our backs on this fact and to fail to assist him in his hour of need is tantamount to a betrayal of the vilest sort.  Our love of animals is one of many expressions of our own humanity.  Throw this over, and a very basic core of of innate goodness begins to be eroded away.  A multi-talented cast includes many other Anderson regulars and part of the joy here is to pick out some of those familiar voices: Harvey Keitel is a hoot as Gondo, an alleged cannibal dog, and Greta Gerwig features as Tracy Walker, a vigorous foreign exchange student who is intent on exposing Kobayashi and his malevolent motivations.  There’s even room here for Yoko Ono as an assistant scientist who is prevailed upon by the feisty Tracy to aid her in her mission to liberate the shaggy pets and uncover the dark designs of Kobayashi.  Lots of paws appeal in this one.  And much to savour for Anderson fans and aficionados of stop-motion animation generally.