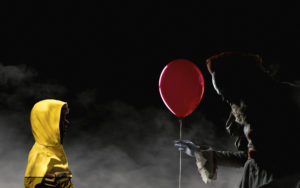 The work of Stephen King has enjoyed something of a mixed fortune over the years as regards big screen adaptations.  1976’s Carrie, for example, deserves its place among the truly great horror movies, but the 2013 remake received generally tepid reviews.  And then there is the case of 1980’s The Shining which, initially, was accorded mixed notices before being reappraised as a true classic of the genre.  The author himself did not exactly shy away when expressing his own disappointment with the Stanley Kubrick adaptation.  If memory serves, he even went so far as to praise a subsequent 1997 television miniseries in comparison to it.  1983’s The Dead Zone was another superb adaptation which benefited greatly from the taut direction of David Cronenberg and the deeply-felt central performance by Christopher Walken.  The merits of 1986’s Stand by Me (which is based on the 1982 novella The Body) cannot be overstated – this is one of the truly great coming-of-age stories bolstered by its fine cast and authentic period feel.  The same can certainly be said of Frank Darabont’s The Shawshank Redemption (based on the novella Rita Hayworth and Shawshank Redemption).  King was not disgraced with other adaptations either such as The Green Mile or Misery.  The same, however, cannot be said of films such as 1984’s Firestarter, 1983’s Cujo or 1989’s Pet Sematary.  The less said about the recent The Dark Tower the better.  Middling adaptations, on the other hand, have included 1987’s The Running Man and 1983’s Christine. 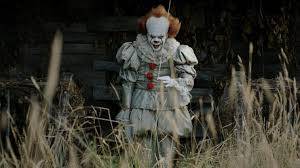 The author’s 1986 novel It is perhaps best viewed as a medley of many of his common themes and threads.  The setting is smalltown America by way of the fictional Derry, Maine.  There is a plethora of characters, but the focus is on the outcasts and the troubled ones among them.  Lingering traumas are made manifest by a monster-demon – who, in this particular case, takes the form of a grinning clown named Pennywise.  The new adaptation (let’s not forget that there was a 1990 miniseries) opens as the 1986 novel did, but the director Andy Muschietti and his writers (who include True Detective director Cary Fukunaga) have wisely chosen to transpose the action from the late 1950s to the late 1980s (1989 in the main).  A young boy named Georgie chases a paper sailboat down the street as a deluge torments the otherwise sleepy town.  When he encounters a seemingly charming clown (Pennywise) in the less than salubrious setting of a sewer, we know that no good will come of this.  The gullible Georgie is sucked into the infrastructure below with ghastly aplomb by Pennywise.  The following summer his older brother Bill (Jaeden Lieberher) continues to be plagued by guilt and a strong smattering of non-acceptance.  Because Georgie’s body has never been found, Bill clings to the tenuous notion that his beloved brother might still be alive.  In stark contrast to this is his father who hollers at him to face up to reality. 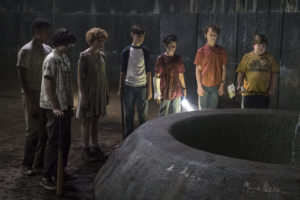 There are other young characters of Bill’s generation who are damaged in some way or traumatised by a grievous domestic situation.  Beverly (the excellent Sophia Lillis) is constantly confronted by a quietly threatening Dad who asks her if she is still his little girl (go figure the insinuation there).  Stanley (Wyatt Oleff), on the other hand, has a pathological fear of germs and contamination; he also isn’t studying up on his bar mitzvah, much to the chagrin of his father the local rabbi.  Eddie Kaspbrak (Jack Dylan Grazer) is a hypochondriac with an overbearing mother in the mould of Mrs. Bates.  Richie Tozier (Finn Wolfhard from television’s Stranger Things) has a predilection for strong language and finding trouble as he goes about his daily pursuits.  Ben Hanscom (Jeremy Ray Taylor) is struggling to settle into his new school and is conscious of his weight problem; Mike Hanlon (Chosen Jacobs) is ostracized for an even more insidious reason – the colour of his skin.  There are phobias, fears and anxieties aplenty in this dynamic and it is within these chinks that the figure of Pennywise seeks to position himself.  The town of Derry itself has a pronounced notoriety with respect to the number of individuals (particularly children) who have inexplicably disappeared down through the years and the group of seven (the Losers Club) as they are known determine to unearth the truth behind this lingering mystery. 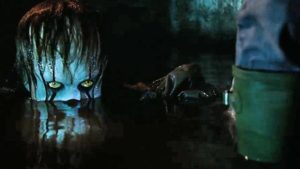 Those of us familiar with 80s pop culture will revel in many of the goings-on here and it hardly seems a coincidence that the aforementioned Finn Wolfhard from Stranger Things is among the excellent young cast.  The milieu and setting is familiar to those of us of a certain generation indeed and astute viewers such as myself (I think) might chuckle privately as they see films such as Batman, Lethal Weapon 2 and A Nightmare on Elm Street 5 playing at the local cinema theatre.  Posited as a supernatural horror film (as you would expect), It plays to its strengths as a coming-of-age story which emphasises the importance of the collective will over the individual and the strength derived from unity of purpose.  Universal themes of loneliness, guilt, alienation and domestic abuse will strike a chord with all generations of cinema-goers, but there is also a playful streak of humour at the core of It which is refreshing and reminiscent somehow of Richard Donner’s The Goonies (yet another allusion to the 1980s you might note). 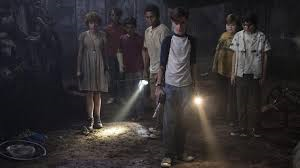 Bill Skarsgard makes for an effective Pennywise; sensibly the Swedish actor does not ham it up too much and finds a suitable balance between his moments of malice and wisecracking.  The horror aspect to It is not a conventional one for the genre and there is a slight overuse of jump scares in an effort to heighten the tension.  It is not a scary film in the mould of the slasher genre; Pennywise does not have the same visual impact as a Michael Myers for example.  There are no screaming blondes on display here and because the young characters (as a group I might emphasise) are so resourceful, we never quite fret about their eventual prospects.  It wisely plays to its strengths which are its stellar young cast, its offbeat humour, the nicely-observed period feel and the themes which are suitably probed.  And hey it’s the 1980s, a decade which appears to be in vogue at this present moment in time.  Stephen King for one should appreciate this more than most.  Many of the author’s best and iconic works were born during this period of time.  Expect a planned sequel in due course.  Sadly, much of it will have to take place in a different era.