Movie Review: It Comes at Night 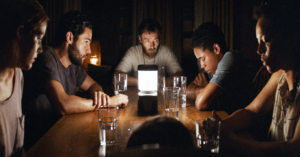 Trey Edward Shults’s post-apocalyptic psychological drama is as effective a piece in this particular sub-genre as you will have seen in years optimising as it does its low-key setting and tightly-knit bunch of characters.  Cinema-goers and television buffs have been provided with a veritable excess of entertainment in this field in recent times.  Robert Kirkman and Tony Moore’s The Walking Dead, as we know, deals with the scenario of a zombie apocalypse; the television show which has adapted this source material is still with us and moving on to its eighth season.  Max Brooks’s World War Z: An Oral History of the Zombie War has similarly been tailored for an even bigger medium by way of 2013’s World War Z.  We’ve had other variations and riffs on the subject with 2010’s Stake Land, 2002’s 28 Days Later and its sequel 28 Weeks Later.  And then there are the non-zombie post-apocalypse tales such as the recent Mad Max: Fury Road and its predecessors.  2009’s The Road, 2010’s The Book of Eli and 2006’s Children of Men all posited bleak and dystopian visions of a world which has been plunged into chaos and hopelessness.  Invariably, the characters in these stories determine to either stay on the move or hole up in a reinforced enclosure.  It Comes at Night (the It here is the operative word by the way) opts for the latter premise.  A small family of three have sequestered themselves in a backwoods location in the aftermath of an unspecified disease.  The contagion is especially rapid and merciless as we see in the opening scene.  Sarah (Carmen Ejogo) must stand aside and listen in horror as her father Bud is effectively put down because he has contracted the dreaded sickness.  Her husband Paul (Joel Edgerton) has become scarily resourceful with the onset of the plague.  The couple have a son Travis (Kelvin Harrison Jr.) which bolsters Paul’s resolve to survive.  By necessity he knows that the family unit must be wary of any subtle change in their environment or intrusions by other human beings.  When a perfect stranger Will (Christopher Abbott) breaks into their makeshift domicile, Paul justly treats him with more than a sense of reservation.  What are this man’s motivations?  Is he lying when he tells them that he is simply searching for fresh water for his wife and son?  On the other hand a group of six would surely fare better in the woods than three as Sarah argues.  The dilemma presenting itself to the patriarch Paul is a familiar one in this new world beset by calamity and danger.  Do you trust other individuals who may be just as ruthless and self-serving as yourself?  Do you empower them in some way by allowing them into your barricaded shelter? 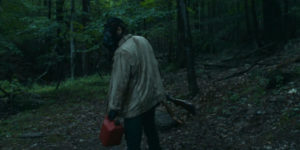 Viewers anticipating an expansive, all-embracing treatise on this world in the wake of an unnamed catastrophic event will be disappointed.  Writer-director Shults (Krisha) chooses not to go into an exposition as to what has happened to society and, indeed, civilisation as a whole.  There is an oblique reference to the cities and the sickness and nothing more.  Two of the characters converse at one point about their past lives – what they did before the infestation took hold.  Paul, for his part, was a history teacher and he jokes lightheartedly about his knowledge of the Roman Empire.  A much larger domain than that historical one has been toppled in the present day and the teacher now strives to secure his future and that of his family.  Allowing Will to move in with his wife and little boy, Paul sets down the rules which must be followed and the conditions which must be observed.  A red door at the end of a darkened corridor is the only way in or out and Paul emphasises the need for vigilance at all times.  One particular proviso which may contain a clue as to the pandemic’s origins is his instruction that no one is to go out at nighttime unless it’s absolutely necessary. 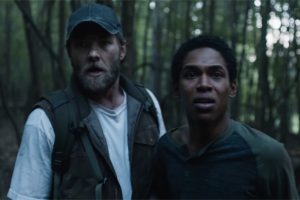 Darkness is a prevalent motif in It Comes at Night and the film is gorgeously shot by its director of photography Drew Daniels.  A great deal of the action takes place indoors and some of the tensest scenes take place in the most mundane of settings – a dining room table, a home office desk as the two adult men share a drink.  The film’s most optimistic montage takes place as Will and his family settle in and are shown the ropes by Paul and Sarah.  Tentative bonds are formed, but, of course, we are well versed in knowing how quickly such alliances can break down.  No amount of amiable log splitting or jokes about favourite foods can totally dispel the overarching emotion of fear.  Fear drives each of the characters in some overt or subtle way.  Travis is tortured by nightmares and sleepless nights in which he has repeated visions of his dying grandfather.  Paul’s fear is more tangible and manifests itself when he first encounters Will and, later, reprimands his son for going into the woods alone.  ‘You want me to be the bad guy, then I’ll be the bad guy,’ he tells Travis as the 17-year-old wishes to go outside to see his infected dog one last time.  There’s an interesting sub-text going on here also with regard to Travis’s apparent crush on Will’s pretty wife, Kim.  The teenager eavesdrops in the attic the very first night the couple are in their bedroom.  It may be the end of the world – or pretty close to it – but characters retain their wants and desires, their strengths and their weaknesses.  As Paul pours a drink for Will, there is the slightest of insinuations that the latter may have had a drink problem – or a penchant for it at the very least – in the past.  Lives may have changed irrevocably, but inner demons still remain and hold some residual influence. 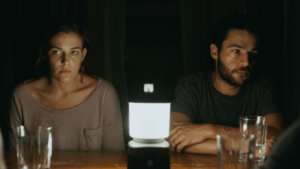 This is a film which will not be to everyone’s taste and several members of the audience I watched it with moaned and sighed as the end credits rolled.  Shults ramps up the tension by way of conversation and inference and coaxes some fine performances from his small cast.  Edgerton – a fine actor on any given day – is excellent as Paul and he’s well supported by Abbott, Ejogo and Keough.  The standout of the cast however is Kelvin Harrison Jr. as Travis and much of the drama of It Comes at Night is shown from his perspective.  The perceptive and thoughtful teenager deserves a much better life than this; a normal life at the very least.  The same applies to the other characters as well, none of them manifestly good or bad, just merely ordinary humans with an innate desire to survive.  It Comes at Night’s best moments arrive when such an instinct takes hold and compels its characters to extreme acts.  Watch it and flinch because it could be anyone of us in such unenviable circumstances; but, by all means, watch it in any event.