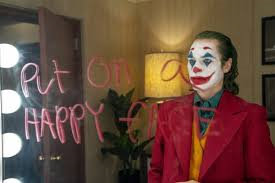 The opening moments of Todd Phillips Joker set the tone for much of what is to follow.  A loser of a would-be comedian by the name of Arthur Fleck (Joaquin Phoenix) is set upon and viciously beaten by a gang of young thugs on the grimy streets of Gotham City.  This unprovoked act of violence should surely not go unchecked, but a short time later we get the sense that Arthur has not reported the crime to the police.  Why so?  Is it because he lives with an innate sense of fear?  Or does he merely conclude that, in an insensitive world such as this one, no one really cares, least of all the so-called strong arm of the law?  A short time later Arthur is informed that he must pay for a sign which was ‘lost’ by him to the violent gang.  Now thoroughly enraged, he kicks against a wall in an alley until he collapses into a veritable heap.  When a co-worker presents him with a gun to protect himself, we – the audience – know that no good can come of this gesture.  At odds with the world, and suffering from a mental disorder which causes him to laugh incessantly, Arthur is not the kind of man to whom weapons ought to be entrusted.  His veneer tells us as much.  His body language speaks volumes of the turmoil which resides within himself. 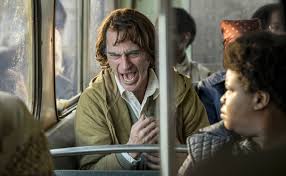 Much time and column space has already been devoted in the media to the film’s depiction of mental illness and the violence which ensues during the course of its narrative.  Yes, it’s unsightly at times and almost difficult to watch.  But so too are many of Phoenix’s mannerisms and the manic laugh which I alluded to above.  It’s a performance of some scale and extent and the actor appears to plunge to the very bottom of the well in order to find nuances and facial expressions which might further intensify his method.  We saw this level of commitment from him before in 2012’s The Master.  His Arthur Fleck is both a product and a manifestation.  A narrative exposition at quite an advanced stage informs us of a deeply troubled childhood.  Elsewhere, there are strains of David Fincher’s Fight Club with regard to Arthur’s delusions and various imaginings.  But the most pointed cinematic/intertextual references here are to Scorsese’s Taxi Driver and The King of Comedy.  Which brings us neatly to the casting of Robert De Niro. 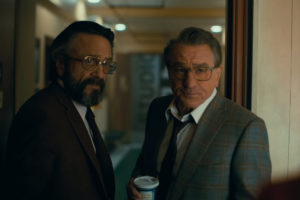 Fleck’s desire for recognition can not be simply described as a wish for fifteen minutes of fame.  In truth, and with all due respect to Todd Phillips and Scott Silver’s screenplay, the central character operates on a much more basic level than this.  When Fleck and his ailing mother Penny (Frances Conroy) watch their favourite talk show host Murray Franklin (De Niro) strut his stuff on television, Arthur constructs in his mind a celebrity character who he hopes will be sympathetic to his plight and understand the turbulent nature of his life to this point.  An early dream of his in this respect sees Franklin call him down from the audience to praise him for his honesty and his devotion to his fragile mom.  Aficionados of Scorsese will of course spot the knowing allusions to 1983’s The King of Comedy in which De Niro’s Rupert Pupkin went to extreme lengths to ingratiate himself with Jerry Lewis’s Jerry Langford.  At the end of that particular film a triumph of sorts was suggested by the filmmakers with respect to Pupkin’s unexpected celebrity (gained at the expense of an intervening prison sentence).  There is no semblance of this wish/desire on Arthur’s part here I would suggest; he simply wants acceptance and affection from a father-like figure.  The climactic television appearance in the instant film is also much more dramatic and deadly without giving too much away.  References to another Scorsese film – 1976’s Taxi Driver – also raise their head and Joker is more closely aligned with the psychology of Travis Bickle than of Rupert Pupkin.  He’s far more dangerous and extreme.  And yet when asked if he supports a cause or spearheads a campaign, Arthur’s soft response is simply no.  He is not representative of a whole lot really, except the downtrodden and dispossessed perhaps. 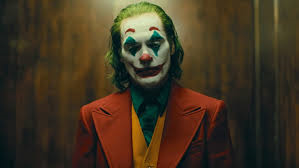 Intended as a stand-alone source story film for the infamous Batman nemesis, Joker certainly pulls no punches with respect to its depiction of a dystopian world in which rioting and random acts of violence are endemic.  Beaten by three drunken businessmen on a subway, Arthur retaliates by committing his first murders which are subsequently hailed by some as an expurgation.  The class divide in this variant of Gotham City could hardly be more pronounced.  When Thomas Wayne (yes little Bruce’s Daddy) appears on television to condemn these killings, he labels those envious of more successful people as ‘clowns.’  A movement soon envelopes the troubled city like wildfire.  Donning joker masks similar to Arthur’s painted visage, the less-well-off rise up against their better endowed fellow citizens who occupy the Park Avenues of the city.  The central character does not seek to participate in this revolution, nor does he entertain any notions of leadership.  Social anarchy is not far below the surface in this particular world and Arthur’s crime is merely the fuse which lights the fire.  If anything, the central character pursues a much more personal mission as he seeks to learn more about his problematic formative years.  Why are we not greatly surprised that the answers he uncovers are far from good?  The denouement which follows is difficult and not bereft of flaws.  A coda section at the very end raises more questions again with regard to the exact narrative arc.  Why are these modern-day filmmakers intent on such layers of ambiguity the more undemanding viewer might well ask himself/herself.  But at the very least we have a fine production of a film here and – in Phoenix’s uninhibited acting – a performance which lingers in the memory – something indeed akin to a primal scream.