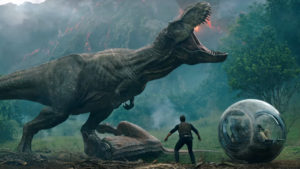 The fifth installment of the Jurassic Park film series commences with a dark exterior scene in much the same way that the 1993 original directed by Steven Spielberg began.  A mercenary team has been dispatched to the island of Isla Nublar where the events of 2015’s Jurassic World took place.  It’s three years later, but we sense that something foul is afoot.  The team retrieve a piece of bone from the remains of the Indominus rex (that was the hybrid creature which effectively caused the closure of the theme park in the previous film).  The mission, of course, is not without its moments of terror and complication.  At a U.S. senate hearing meantime, Dr. Ian Malcolm (Jeff Goldblum) emphatically states his assertion that the re-introduction of dinosaurs to this planet has been contrary to the proper order of things.  An awkwardly-placed news segment informs us that Isla Nublar’s days are numbered and with it the residing reptiles.  Malcolm’s argument forms one side of the debate which writers Colin Trevorrow and Derek Connolly seek to examine.  Is it inherently wrong to regenerate a species which has long since passed into extinction?  What morality, if any, informs such an enterprise?  Should the dinosaurs simply be allowed to perish once more? 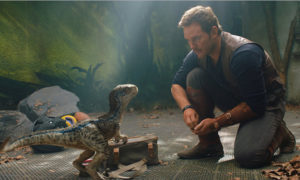 It’s a fairly interesting discourse, but, let’s face it, this is a Jurassic Park film and the majority of viewers will flock to cinemas on the assumption that the movie will deliver breakneck action sequences and high-octane chases.  If you are one such individual, then Jurassic World: Fallen Kingdom ticks some of the boxes in this regard, but not all of them.  Spanish director J.A. Bayona (A Monster Calls and The Orphanage) is well versed in the horror and fantasy genres and his selection as helmsman here is undoubtedly informed by a pressing desire to take the series in a novel and somewhat unorthodox direction (bear in mind that a third film in this particular reboot is already penciled in for the summer of 2021).  Bayona delivers in that latter regard with respect to what is the darkest film in the series thus far (in both tone and visualisation).  Much of Fallen Kingdom plays out in nighttime sequences, in the back of heavy goods vehicles and in subdued interiors.  There is a dimly-lit mansion which brings to mind the setting of The Orphanage.  Elsewhere, ghastly corporate powers are plotting a means to realise financially on the dinosaurs which require rescuing from the impending perils of Isla Nublar.  Cue the re-entry of Chris Pratt’s Owen Grady and Bryce Dallas Howard’s Claire Dearing.  The central stars and their love-hate bickering was one of the best elements of the 2015 film.  Pratt, once again, proves to be endearingly mettlesome; Dallas Howard gives as good as she gets with an equally indomitable performance.  New cast members to the party include Rafe Spall, Toby Jones, Ted Levine and James Cromwell.  There are nice turns from Justice Smith as an IT technician, who has an innate fear of the T-Rex, and Daniella Pineda as a feisty paleoveterinarian.  B.D. Wong reprises his role as the driven and egotistical Dr. Henry Wu.  Geraldine Chaplin figures briefly as a nanny with a family secret. 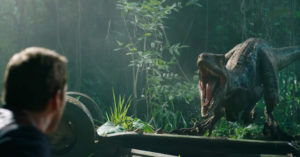 Aficionados of the series might find themselves ever so slightly disgruntled as the lights go up for the closing credits.  Don’t get me wrong in this respect.  Fallen Kingdom is a more than decent entry in the franchise, but it does suffer from some patchy pacing which chiefly occurs during the second third of its 128-minute running time.  All too often, there are carefully constructed images of the dinosaurs in states of confinement and sedation.  The rescue mission – which is admirably mounted at an early stage – is quickly (as you might guess) shown to be a fraudulent affair.  When the action moves to the mainland, Bayona and the writers struggle to some degree with the narrative trajectory.  Yes, it is intriguing to learn of the trafficking angle which the commercial heads (chiefly Rafe Spall’s Eli Mills) have recognised, but where is the real thrill in viewing a drugged Raptor (Blue from the previous film).  Of greater interest generally is a subplot concerning a young girl who suspects the machinations of Spall and his accomplices, and who has a personal history characterised by a certain act of propagation.  Bayona excels in these interior moments which are pervaded by a deep sense of unease and foreboding.  An auction scene in the film’s final third is reminiscent of King Kong.  Just like that latter story, you might well guess that the restrained species will not remain this way for long.  The final moments of Fallen Kingdom play out with more than a tinge of a well-fashioned horror movie.  Bayona and his editor Bernat Vilaplana execute the mansion sequence with no small aplomb.  The cinematography of Oscar Faura and music by Michael Giacchino play their part with respect to ramping up the tension and inescapable sense of jeopardy. 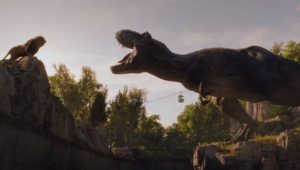 The question of morality, which I alluded to earlier, rears its head once again as the film draws to a close.  A momentous decision by one of the central characters appropriately paves the way for the sequel.  In this latter regard, it’s interesting to note that Jurassic World’s Colin Trevorrow will once again sit behind the camera.  Which begs the question as to why the producers hired Bayona on this occasion for what may well be the sole Jurassic Park film which he will direct.  As I’ve suggested previously, I suspect the filmmakers were aiming to deliver something atypical to the series as a whole.  How many times do you want to watch humans fleeing as a dinosaur herd stampede threatens to mash them into non-existence?  Where can a smattering of originality be found as a would-be victim cowers one more time behind a fridge or a concrete pillar?  Fallen Kingdom is, therefore, intended to be the somewhat off-centre middle section of this new trilogy – a little bit of unusual here, a modicum of deviation there.  The more regular template may well be embraced in the forthcoming next chapter, but Bayona has done no harm to the series generally.  His influence and sensibilities as a European director are evident in every shot and narrative twist.  A more than decent second film which – thankfully – is quite unlike its predecessor in style and content.  But – hey – that’s exactly how they intended it if you ask me.