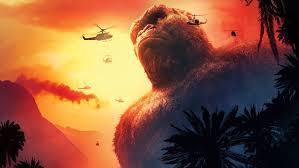 The over-sized simian is back with a bang in director Jordan Vogt-Roberts’ highly enjoyable and well-paced monster movie which acts as both a reboot in the Kong franchise and a second film in Legendary Pictures’ planned Monsterverse (2014’s Godzilla being the first).  It’s 1973 and the Vietnam War has reached its rather anti-climatic conclusion in Southeast Asia.  Familiar musical strains play on the soundtrack.  Haven’t we heard White Rabbit in a plethora of other Vietnam-era films?  Yes, that is Bad Moon Rising you’re listening to for the umpteenth time.  Ziggy Stardust is even introduced to John C. Reilly’s stranded WWII fighter pilot.  He’s reliably informed it’s the big new thing.  But Reilly and his new friends on the titular Skull Island have much bigger things on their minds.  A whole host of deadly creatures inhabit this world as was the case with Peter Jackson’s King Kong of 2005.  And the big guy is not the enemy here, just as he wasn’t in previous incarnations dating back to the famous 1930s version.  He’s really just misunderstood a little.  He doesn’t like disturbances and he most definitely has no great love of noisy helicopters. 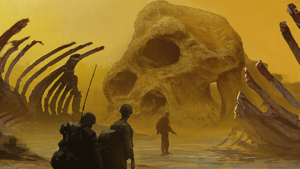 A motley crew of helicopter personnel, seismologists and geologists is assembled by John Goodman’s Bill Randa.  Randa is seeking to map out the island shaped like a skull which has heretofore been off the charts on account of the perennial storm which rages close to its shores.  Recruited for this mysterious mission as well is James Conrad (Tom Hiddleston), a former captain in the British Special Air Service and self-declared anti-war photographer Mason Weaver (Brie Larson).  For good measure amongst the ensemble cast we also have such recognisable faces as Toby Kebbell, Shea Whigham and Richard Jenkins.  The ubiquitous Samuel L. Jackson has a typically meaty part as Colonel Preston Packard, the leader of the helicopter squadron who takes it more than a bit personally when the behemoth that is Kong swats several of his team down from the sky.

That particular helicopter sequence is one of several superbly-choreographed sequences in Kong which makes the admission price worthwhile alone.  Comparisons here have been drawn to yet another Vietnam film, namely Coppola’s Apocalypse Now, and it’s indeed hard not to call to mind the famous Ride of the Valkyries sequence as those ill-fated choppers descend on the eerie-looking archipelago.  One is almost expecting to hear Robert Duvall’s Colonel Kilgore at any time.  And the photography employed here by DOP Larry Fong is very evocative of that of Vittorio Storaro’s.  In a wonderfully blatant moment Jackson’s Packard faces off with Kong in a scene dominated by hues of strong orange.  Elsewhere, we have Reilly’s aforementioned pilot who is named Marlow.  So does this mean that Kong is Kurtz?  We are reliably informed by Marlow that he is the last of his kind and also the protector of the indigenous population.  There’s even a boat trip upriver in case you’ve missed the many allusions.

Packard goes ever so slightly Captain Ahab in his desire to mete out revenge on Kong for the slaughter of so many of his men.  But the truth of course is that shadowy forces are at play and the mission itself is a subterfuge for a much grander, more malevolent scheme.  Randa’s expedition is not to map this territory as he claims, but rather to provide hard evidence to the powers-that-be that there are powerful creatures such as Kong who could potentially overrun the world.  A post-credit sequence is in keeping with this notion.  Meantime, the team on the island are roughly split into those who come to realise that Kong should live in order to maintain the balance in nature here, and those who follow Packard in his vengeful purpose.  More notable scenes involve placid giant buffalo, a giant stick insect and savage reptilian-type creatures which Reilly’s Marlow has aptly named skullcrawlers.  There’s nothing of great subtlety in Kong: Skull Island, but as an action/monster movie it works terrifically well with some great visuals and nice smatterings of humour.  John C. Reilly is a particular standout in the cast and it’s entirely appropriate that some of the credit sequence at the end of the film is devoted to his character.  Elsewhere, Hiddleston and Larson do commendable if unshowy work and Samuel L. Jackson gets to pull his trademark scowl a great deal.  It’s Kong’s movie though and the big guy will not be a disappointment for aficionados of this particular genre.  In a few years’ time he’s due to face off against Godzilla on the big screen.  I wonder if he’ll make it to New York City again anytime soon.  A sizeable enough roar here to keep this franchise of interest for the time being.