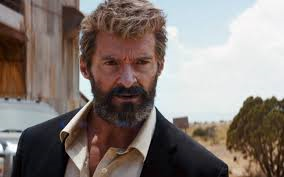 The retractable-clawed one makes his (reputedly) final cinematic appearance in James Mangold’s highly enjoyable and appropriately resonant Logan featuring a gritty and poignant performance by X-Men regular Hugh Jackman in the title role.  We are introduced to a Logan who is now acting as a chauffeur-for-hire; older and somewhat unsteady on his feet (a gait impeded by injury is the visual clue in this regard), Logan is first seen in typical fashion as he sees off some no do-gooders who are attempting to jack his limousine.  But the super-deadly poise has abandoned him and those regenerative powers are not what they used to be.  It’s the year 2029 – as we are informed – and mutants are pretty much an endangered species now, Logan included.  He resides with another mutant named Caliban (Stephen Merchant) and together they tend to Professor Charles Xavier (Patrick Stewart) who is not in such good shape either suffering as he does from a neurodegenerative disease.  Xavier has become something of a liability in that he is no longer capable of controlling his telepathic powers – a mere seizure can have devastating results.  Then enter a woman named Gabriela who requests that the Wolverine, as she still calls him, help her and a young girl named Laura reach a place in North Dakota by the name of Eden. 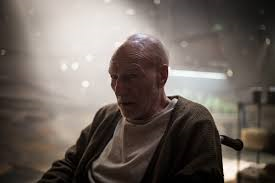 One of the ad campaigns for this new X-Men film (although it’s not really an X-Men film in the traditional sense) was premised on the theme of one last time and it’s on this basis that Logan eventually, and reluctantly, accepts the mission.  Of course he’s assisted in this decision by a wonderfully nagging Stewart (a nonagenarian and not an octogenarian as he insists) and some baddies called Reavers who are cybernetically-enhanced enforcers.  Central amongst them is Donald Pierce (Narcos star Boyd Holbrook) who is intent on capturing the young girl for reasons best known to himself and his associates.  Xavier soon deciphers their motives and one suitably bloody set-piece later, he, Logan and the girl are en route to the promised Eden.  With the aid of some modern technology (phones don’t seem to have advanced a great deal by 2029), Logan and Xavier discover the evil-minded project that was X-23 – a scientific/commercial enterprise to breed mutant children in order to harness their powers towards some other malicious end.  And in a not totally unexpected subplot, the physically adroit Laura (brandishing her own set of steel-plated weapons) is revealed to be Logan’s biological daughter. 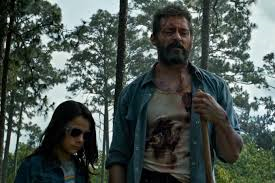 Director Mangold (who previously helmed 2013’s The Wolverine) has cited influences such as George Stevens’ Shane, Peter Bogdanovich’s Paper Moon and Darren Aronoksky’s The Wrestler with regard to this particular film.  Indeed it’s not difficult to pick out fragments of these and some other cinematic entities in the overall narrative trajectory of Logan.  Xavier and Laura are shown watching some key moments from the aforementioned Shane in a hotel bedroom, particularly those final few moments involving Alan Ladd’s titular character and the doe-eyed Brandon deWilde (the parting words from the former to the latter turn up again later in the film if you listen closely enough).  Elsewhere, Logan is also a road movie in the sense of Paper Moon (daughter and supposed father – get it) and a story about inevitable physical decline in the sense of The Wrestler (I don’t think I need to explain to you who most closely resembles the past-his-prime fighter in this one).  The western template is the predominant one employed here with Jackman’s reluctant hero (as always), the kindly but visibly withering old man – Xavier – who may or may not last the length of the journey, and the spirited young lady of few words it seems, a sort of mute Mattie Ross.  But director Mangold and his co-writers Scott Frank and Michael Green are aware of the universe they are operating in and bring us back to the X-realm with some suitably well-timed jolts.  There are several excellently choreographed action sequences as one would expect from a film in this genre and some nice touches of humour to boot.  Jackman and Stewart work especially well together (as they’ve done in the past) and the Australian actor also builds a deeply-felt bond with co-star Dafne Keen.  In supporting roles, Richard E. Grant turns up as Zander Rice, the surgical head of the X-23 and subsequent X-24 projects; former ER actor Eric La Salle plays the father of a smallholding family (latter-day homesteaders one might well imagine) who host Logan, Laura and Xavier for a much-needed respite. 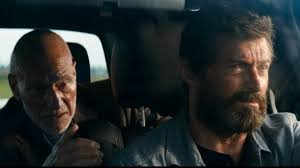 There’s a conclusion to be reached in this film and also in Logan’s overall story arc of course.  Having played the character for an incredible 17 years now, Hugh Jackman seems resolved that this will be the very last time with no chance of a return.  The end of Logan would seem to suggest as much and if indeed this is Jackman’s final outing as the mutant, then he couldn’t have hoped for a better exit.  Well-paced and thoughtful throughout, Logan is the X-Men movie you might not have expected, but fans of the series will not be disappointed with the execution employed here in spite of the denouement and the implications it may hold for future sequels, reboots and rehashes.  At the heart of all this is some excellent writing and direction and terrific central performances.  Co-stars Stewart and Keen are excellent in their respective roles, but it’s Hugh Jackman’s film all the way and the actor (in his late-forties now) anchors proceedings with a typically gutsy and physical performance.  But watch out for even more items in his considerable armoury with nuanced moments of pathos and perception.  This is a worthy iteration of the reluctant hero – the man who realises his time is almost up and who takes that one last stand.  It’s a lionhearted effort by the character and a fearless performance by this wonderful actor.