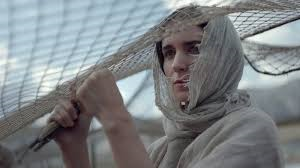 Australian director Garth Davis’s somewhat revisionist biblical drama opens with its titular character’s decision to seek her own path in life and follow a destiny which she envisages in the shape of an enigmatic preacher.  The daughter of a local fisherman whose mother passed when she was still a child, Mary repudiates the suitor whom her father feels will give suitable meaning to her life and substance to her sensibility.  The young woman is assumed to be possessed by a demon on account of this act of independence and all seems lost until Jesus shows up in the form of a bearded and softly-spoken Joaquin Phoenix.  A connection is more than palpable between the two and Mary decides to join Jesus and his apostles as they seek to establish God’s kingdom on earth.  The screenplay by Helen Edmundson and Philippa Goslett throws up some resentments and vignettes of distrust as the previously all-male group wonder at how this female addition might unbalance their sense of mission and purpose.  Peter (Chiwetel Ejiofor) frets openly at how the group’s image may be tarnished in the main; Judas (Tahar Rahim) meantime is rather more affable, but an overarching framework of sedition is not far from his thoughts. 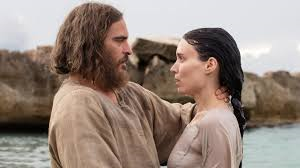 Filmed on location in Southern Italy, Davis’s film is beautifully shot by Greig Fraser, but one can’t help remarking upon the pristine costumes and set designs which work somewhat against the piece’s aura of authenticity.  There is a distinct lack of the cruelty and brutality which underpinned The Passion of the Christ.  The crucifixion – the central denouement of any such film concerning Jesus – is relayed from the perspective of Mary herself who cannot at first bring herself to bear witness to the sacrifice the Messiah must make.  A telling scene which precedes this involves her and the mother of Christ.  You must learn to accept what is going to happen to him as I have the older woman instructs her in so many words.  The exchange in itself brings us to one of the thematic difficulties of Davis’s film.  Is this intended to be a love story of sorts?  Is Mary the strong-willed protagonist of the piece or merely a confused woman in search of the answers to her own life?  Commendable as it may be, the film’s revisionist aspect does not make the central story as engaging as one might expect.  Mara – a fine actress in every respect – is well cast as the apostle of the apostles, but Phoenix is just a little bit too familiar as Jesus.  Sporting a similar hairstyle and beard as he did in Lynne Ramsay’s recent You Were Never Really Here, the actor is enigmatic as one might imagine, but his Jesus is portrayed at a remove.  His conversations with Mary are pitched at a high level with no abiding sense of warmth or affinity.  Yes, he is a liberating force in her life – as the writers and director clearly intend – but something is lost in the overall design.  There is a lack of human connectivity which one feels the story is deserving of and should ultimately propagate. 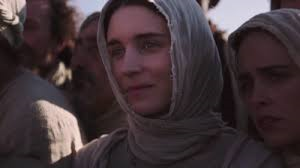 Comparisons to previous films in this particular genre will come to mind for many and foremost among these is Scorsese’s The Last Temptation of Christ which, controversially, depicted Jesus imagining his married life to Mary Magdalene.  The new film deserves praise for its portrayal of the central character whom, we are informed at the conclusion, was never a prostitute as the subsequent religious establishment made her out to be.  As a feminist text, Mary Magdalene is laudable with respect to its core message of an unconventional and individualistic woman who is determined to spread the word even after the Messiah has departed.  I won’t remain here and be silent she informs the rather insipid apostles who appear to be entirely absent from the scene of the crucifixion.  Proper order we think.  The final image of Mary walking purposefully towards the camera is in keeping with this ethos.  The decisive woman will succeed in her design we feel.  Her sense of purpose and mission is not in any doubt.  A fair to middling biblical drama, Mary Magdalene is told on a smaller scale than many of its predecessors and features the final musical score of the late Johan Johannsson.  The sadly departed composer contributes a typically emotive piece of work to a film which has its shortcomings as well as its strengths.  It’s not nearly in the same league as Pasolini’s peerless The Gospel According to Matthew, but, mercifully, is bereft of the overblown ardour of Stevens’ The Greatest Story Ever Told.  An interesting entry in the biblical canon which will neither offend nor exactly inspire.