Truly great action films strike an astute balance between storytelling, character development, tongue-in-cheek humour and the all-important choreographed set-pieces which – well – classify them as being part of the action genre.  I’m thinking in terms here of the likes of 1981’s Raiders of the Lost Ark, 1988’s Die Hard, 1991’s Terminator 2: Judgement Day and the first three films in the Jason Bourne series.  To this list, you would have to consider the most recent films in the Mission: Impossible series (I’m thinking of 2011’s Ghost Protocol and 2015’s Rogue Nation in this respect).  The fifth installment in the series, which was theatrically released three years ago, was especially (and deservedly) praised for its breakneck action, fine performances and sleek direction and editing.  Was it possible to top this film with regard to the high-octane entertainment we asked ourselves.  The answer is a resounding yes with respect to this sixth film in the series which – once again – has Tom Cruise and his IMF pals globe-trotting apace as they surmount one impossible obstacle after another. 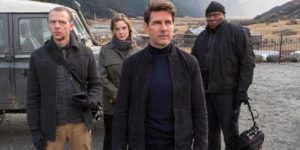 There is a supreme elegance to the proceedings here which owes much to the returning cast and crew (how often does one get to use the word elegance in relation to the action genre).  Writer-director Christopher McQuarrie, for the record, becomes the first man to helm two films in the overall series.  His stewardship is all the more remarkable when one considers the preposterous yet entirely coherent action sequences which he delivers with great style.  In typical fashion, the new film does not waste any time in immersing us in the thick of things.  Residing temporarily in a safehouse in Belfast, of all places, Ethan Hunt (Cruise) is communicated the plans and particulars of a mission pertaining to three plutonium cores which, naturally, have fallen into the wrong hands.  There is reference to a terrorist group called The Apostles with more than a tenuous link to Rogue Nation’s The Syndicate.  The retrieval of the said cores is perfectly set up by Hunt, but his own innate decency results in the eventual failure of this particular mission.  Enter one August Walker (a physically imposing Henry Cavill), a CIA assassin who plies his trade working for the Special Activities Division.  Walker is tasked by the new director of the CIA Erica Sloane (Angela Bassett) with the assignment of monitoring Hunt and his team.  Immediately, the barbs begin and McQuarrie posits the essential dichotomy between the two men with great economy.  A choice sometimes has to be made in the field between the individual team member and the greater good.  Ethan still clings to the notion that he can and must save everyone.  When quizzed by the more vulnerable Benji (Simon Pegg) as to how he will have his back, Ethan simply assures him that he will allow no harm to pass.  Walker, on the other hand, believes in the rigours of expendability.  Sometimes, a man has to be sacrificed so that the overall mission is preserved intact. 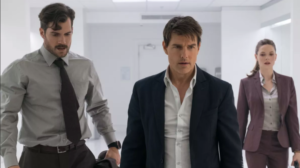 It’s a fascinating thematic thread which McQuarrie places before us on full view and it takes on an even greater dimension with the re-introduction of Ilsa Faust (Rebecca Ferguson) – remember her as the bravura fomer MI6 agent from Rogue Nation?  Ferguson was one of the best things about that previous film and here once again she proves herself equal to the male characters with regard to her technical prowess and three-dimensional characterisation.  As per Rogue Nation, we are lulled into a state of perplexity as to whose side Ilsa is really on.  Meantime, the raising-the-bar action sequences are delivered hard and fast.  A HALO jump scene over Paris (which was actually filmed in the UAE) involved a total of 100 jumps from 25,000 feet approximately so that McQuarrie could get the three takes that he required.  A motorcycle and car chase sequence which follows on the streets of the French capital is absolutely second-to-none.  All the while, McQuarrie introduces strains of subterfuge and double-crossing with a suitably deft touch.  It would spoil much of the fun for those of you who have not yet seen the film, but suffice it to say that not all members of the team are what they would appear to be.  The returning Solomon Lane (Sean Harris) – the mastermind and leader of Rogue Nation’s The Syndicate – reminds us that this is, by and large, a sequel to that previous film.  The pertinent fact that Lane has an axe to grind with Hunt ups the ante to an appropriately dizzying degree.  New cast members Bassett and Cavill meantime fare well in their respective roles.  The Crown’s Vanessa Kirby steals every scene she appears in as the nicely-named White Widow.  Ving Rhames and the aforementioned Simon Pegg, as always, are perfectly engaging as IMF team members Luther Stickell and Benji Dunn. 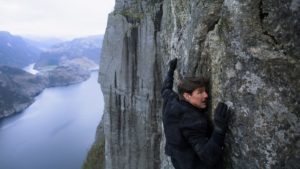 The final third of the film should live long in the memory with respect to the already-famed helicopter sequence involving Cruise and Cavill’s characters.  What struck me most about this sequence (apart from the sheer gumption of the piece) was the bravado editing and storytelling which accompanied it as McQuarrie and his editor Eddie Hamilton alternate this with narrative elements occurring elsewhere which are of no lesser significance.  This is film-making of the very highest order and McQuarrie and his team remind us of the cinematic potency of tight intercutting.  It helps that – in Cruise – the director has a star who (now in his mid-fifties) pushes his body to the nth degree and leaves it all up on the screen for us the viewer to marvel at.  Much of the pre-publicity which surrounded this film concerned the on-screen accident in which Cruise broke his ankle.  The aforementioned HALO jump scene and helicopter tour-de-force are further testaments to this actor’s physical range.  And his acting chops are still in good order as well.  Will there be a Mission: Impossible 7?  I would certainly not bet against it.  The only problem presenting to Cruise and McQuarrie – if they choose to return – is how do you better this one.  Make absolutely no mistake about it, Mission: Impossible – Fallout is one of the greatest action films of all time and all connected with it should take a thoroughly deserving bow.  Wonderful entertainment which delivers with aplomb and then some.