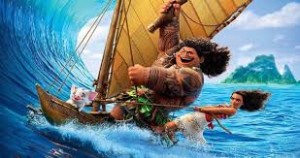 Disney finishes a very exceptional year on a relatively good note in this tale of a plucky chief’s daughter who hits the high seas in a quest to reunite an island goddess with a mystical stone.  The titular Moana lives on a small Polynesian island called Motunui where Dad, Chief Tui, is the head honcho.  A very contemporary problem is facing Motunui’s inhabitants with regard to an increasingly dwindling food supply which may threaten life in this seemingly idyllic paradise.  But Chief Tui is firmly against his daughter’s entreaties to go beyond the notional reef in order to source much-needed rations.  You hardly need to be told what a Disney heroine is going to do next in such a scenario, do you?  Accompanied by a moronic, yet loveable, rooster named Heihei, and spurred on by her dead grandmother’s spirit, Moana plots a course towards Maui (Dwayne ‘The Rock’ Johnson), a demigod who has been stripped of his powers following an attempted theft of the mystical stone (called the heart) and subsequent altercation with the demonic-like lava behemoth Te Ka. 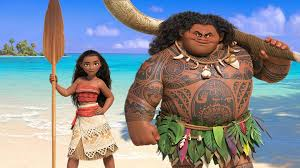 Spirited as all of this is, there is a fundamental danger here that Moana may be a little over-plotted for its own good, particularly in relation to its main demographic, that being a younger audience of course.  But it moves along at such a breathless momentum that all age groups should enjoy and appreciate.  The central character is beautifully voiced by 16-year old Hawaiian actress Auli’i Cravalho and she’s provided with one of Disney’s best songs in recent years, the centrally-themed How Far I’ll Go.  Other notables featuring in the voice cast include Jemaine Clement, as a treasure-hoarding coconut crab, and Nicole Scherzinger as Moana’s mother.  New Zealand actors Temuera Morrison and Rachel House turn up respectively as Moana’s Dad and Grandmother. 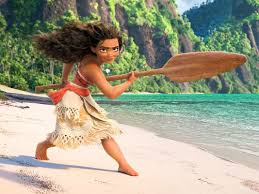 Three-dimensional as Moana is, the same cannot exactly be said of Maui, her reluctant collaborator in all of this.  The shape-shifting demigod never rises above his rather flat characterisation which is scripted rather obviously and borders on the boorish quite often.  There is a present-day requirement of course that such characters speak a recognisable lingo, but in Maui’s case the language employed is rather concocted and a tad wearisome.  I’m thinking in particular here of a reference in the film to tweeting.  It involves the aforementioned rooster – get it?  Also, there is a smidgen of a deus ex machina employed towards the film’s climactic confrontation which may be just a bit too telegraphed for the more discerning viewers among us.  But hey!  This is Disney, and what you see is what you get.  On the very subject of visuals, it has to be said that, even by today’s very high standards, Moana is a gorgeously mounted production.  The colours are opulent and lush, most redolent indeed of the world the film is set in.  At a budget of some $150 million it certainly is all up there on the screen and one can only guess at the number of animators employed from conception to final fruition.  Another smash hit for Disney at year’s end it seems.  2016 has been a very good year for the House of Mouse.  Moana’s girl power and box-office draw will add yet more dollars to those already overflowing coffers.  You go girl!