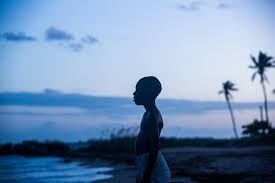 Barry Jenkins’ second feature film is a heartfelt study of the human condition told in the particular instance of one individual, but with themes which are familiar and universal to the human race as a whole.  In the first chapter we are introduced to Chiron, a young boy who is timid and withdrawn.  A victim in many ways of the circumstances surrounding him, Chiron has an unreliable substance-inclined mother (Naomie Harris) and school bullies in tow who force him to hide out in a derelict housing unit in the film’s opening scene.  Befriended by a benevolent crack dealer named Juan (Mahershala Ali), Chiron’s fraught existence appears to take a turn for the better.  But therein lies the rub insofar that Juan himself is a supplier to Chiron’s own mother.  In an intensely moving scene at the climax of this first chapter, the young boy confronts the dealer with the contradiction and untenability of this position.  Elsewhere, and in more happier terms, a friendship flourishes with Kevin, a schoolmate who encourages Chiron to stand up for himself against his tormentors. 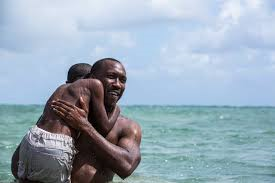 Chapter two concerns the teenage Chiron who is still very much an introverted young man with problems at home and abroad.  His mother’s addiction has not abated over the years and she browbeats him into staying away from the house whilst she is entertaining male company.  Chiron seeks refuge – and a bed for the night – at the home of Teresa, Juan’s former girlfriend (the implication being that the latter has since passed on).  At school Chiron is intimidated by the malicious Terrel and his crew.  Forced to remain inside the school one afternoon as they wait for him outside, he once again encounters Kevin with whom he has maintained a friendship of sorts.  A more intensely personal exchange subsequently comes to pass between the two when they meet on a deserted beach one night.  But this chord of optimism rings false once again as Kevin is forced by Terrel to physically beat Chiron until such time as he is down and they can complete the punishment.  But Chiron has developed a backbone following this humiliation and exacts revenge in the classroom.  The consequences for him are great and will be seen to inform the man he becomes. 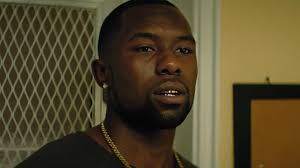 The narrative trajectory leaps forward several years again and brings us to the adult Chiron (as portrayed by Trevante Rhodes).  The well-formed and muscular adult now resides in Atlanta where he is a drug dealer (as Juan once was) who lives alone receiving frequent calls from his mother – who is now in a drug rehabilitation facility.  Paula repeatedly has asked him to visit her there, but the still tight-lipped Chiron politely refuses.  One night he answers yet another such call, as he thinks, only to hear the voice of an adult Kevin on the other end.  Having run foul of the law himself, Kevin now works as a chef in a diner.  For no particular reason – as it seems – he invites Chiron to call on him sometime so that he can cook him a meal as he puts it.  Significantly also, he apologises for the beating meted out years before.  In a moment of pure spontaneity, Chiron takes up Kevin on his invite and shows up unannounced at the latter’s place of work.  There is some evident awkwardness between the two at first, but gradually they warm to each other again.  A more fond reconciliation ensues in Kevin’s home where he also lives by himself in spite of having a young son. 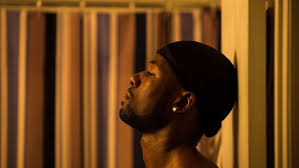 This is at once a tender and astute study of masculinity and the fragility of identity when certain sexual and social boundaries are complicated and crossed.  Chiron struggles with his own innate sense of self in all three chapters.  In chapter one he asks the well-meaning Juan what a faggot is.  Juan, understandably embarrassed by this question, tells him that this is something he will have to find out and understand for himself.  In another telling moment this conflicted criminal advises the young boy as to how he will have to discover his own path in life.  In chapter two the more extroverted Kevin similarly dishes out such words of wisdom and explains why he has given Chiron the moniker of ‘Black.’  In chapter three the adult Kevin recoils at the notion of Chiron’s admitted profession.  ‘That isn’t you,’ he tells him in a pointed moment which is as much about his disappointment as it is about his criticism.  Later on, back at his house, Kevin confides that he is happy with his own lot even if it is far removed from what he dreamed of years previously.  The case is made for the simple life which involves doing one’s job and doing no harm to others.  Moonlight’s final images suggest that Chiron himself may finally embrace another path which does not necessitate a facade of manly hardness and ripping biceps.  Nature may eventually triumph over nurture in this instance.  Chiron at heart is inherently a good person.  The cast is exemplary through all this with particular kudos due to the three actors playing Chiron, former track and field sprinter Rhodes in particular.  Naomie Harris – the only actor by my reckoning who appears in all three chapters – does very well as Chiron’s Mom, and House of Cards regular Mahershala Ali is superb as Juan.  Jenkins’ script and direction address the themes articulated throughout with much sensitivity whilst never descending into the maudlin.  This is a film replete with subtle nuances and expertly crafted performances which defies easy genre categorisation and avoids formulaic cliche.  See it for those reasons alone.