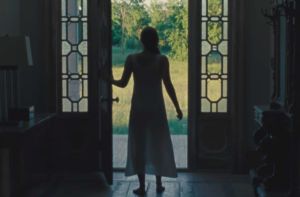 Darren Aronofsky can never be accused of the conventional or the mainstream.  Over the years, the Brooklyn-born director has provided us with the surreal and the disturbing in equal measure.  In 2000’s Requiem for a Dream, the filmmaker effectively conveyed various forms of drug addiction by means of stylistic devices such as hip hop montage and extreme closeup.  The tepidly received The Fountain was especially notable for its employment of audacious visual effects and macro photography.  2010’s Black Swan meantime hit some high melodramatic notes, but jarred for many with its psychologically unnerving undercurrent.  Even the director’s biblical epic Noah is not your typical film in this particular genre.  On a purely personal level, this reviewer would point to 2008’s The Wrestler starring Mickey Rourke as Aronofsky’s best and most accessible work to date.  Regarding his latest cinematic offering, the director has gone on the record stating that, ‘It’s a punch.  It’s a total punch.’  And so it most certainly is.  Viewers expecting an undemanding linear horror film should be warned well in advance.  Although there are echoes and allusions to other works in this particular genre, Mother! does not offer up any ready solutions or standard tropes.  A sense of confusion and misapprehension, which permeates the first half the film, becomes all the more heightened and extreme in the latter stages.

Mother! begins with a married couple seemingly intent on repairing their damaged lives.  Mother (Jennifer Lawrence) is a young woman intent it seems on restoring domestic bliss.  She lives in a large isolated country house with her older husband Him (Javier Bardem).  There are oblique references at first to a fire which had engulfed their domicile.  Bardem’s character is presented as a poet who is struggling with writer’s block.  He requests space and solitude to rediscover his artistic flair and Mother patiently grants him these things; she is, however, taken aback when a stranger (Ed Harris) shows up on their doorstep one evening and Him seems much too eager to embrace the other man’s conversation and camaraderie.  Told largely from the perspective of Lawrence’s character, there is a pervading feeling throughout Mother! that she exists on the periphery of certain situations and human interactions.  When a marvelously pushy Michelle Pfeiffer arrives hot on Harris’s heels, mother is again disconcerted by the intrusion and the invasive questions.  This is supposed to be her patch after all.  Why does this strange woman (who sips alcohol during the mid-afternoon) plague her with queries about her married life?  More pertinently, why is her husband so accepting of these unwanted guests?  Don’t they interfere with his creative impulses in a similar fashion? 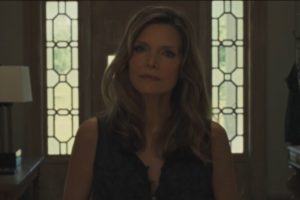 There is an innate sense at a very early point that Him desires such attention and, indeed, he admits as much later in the film.  The discovery of a picture in luggage confirms that the older couple are fans.  ‘He appreciates my work,’ he tells mother.  ‘But I love your work,’ she replies feeling understandably wounded by this remark.  Matters take an even more dramatic twist when Harris and Pfeiffer’s sons (Domhnall and Brian Gleeson) turn up and argue violently on the subject of their father’s will.  The sense of disorientation (for both the viewer and Lawrence’s character) continues apace as even more nameless characters storm the house and debase much of her hard labour in its restoration.  A subtle degradation of character seems to be at play as well.  Him laps up the attention and the praise he receives for an otherwise hackneyed eulogy.  Mother, on the other hand, is treated with a vague form of scorn and attendant disrespect.  When she eventually snaps, it seems entirely understandable to us the audience, but a matter of some encumbrance to the other characters.  Employing tight close-ups, as per Black Swan, Aronofsky emphasises the character’s feeling of isolation.  An unusually disempowered Jennifer Lawrence fares well in the central role as mother, but Bardem is somewhat wasted as the capricious Him.  Elsewhere, the aforementioned Pfeiffer excels as the plain-spoken interloper.

This is a film which will frustrate many and even madden a few who prefer their narrative cinema straight and undeviating.  At the recent 74th Venice International Film Festival, Mother! elicited audience applause and derision in equal measure.  The biblical motifs which become more apparent and pointed in the second half of the film will seem overblown and pretentious to more than a few.  The narrow confines of the film’s setting will not please those who have an inclination for expansive photography and broad subject matter.  Which is not to say that Mother! does not look suitably cinematic or fails to grapple with some weighty themes.  The photography of Aronofsky regular Matthew Libatique is appropriately sombre and Gothic throughout.  The sparse soundtrack, meantime, is replete with creaking floors and groaning crevices.  Aronofsky’s camera sticks to Lawrence’s face and figure like a persisting interrogation.  The profusion of images and incidents will weigh on many viewers as Mother! moves towards its climax and the ending will satisfy very few.  Aronofsky makes no apologies for the style and tone of film he produces.  The twisted artist/muse dynamic which is – perhaps – the very essence of the film is not something which the director presents with fluid strokes.  This is a piece which will divide audiences and one for which reviews are perhaps immaterial.  The best advice this particular reviewer can impart is that you go along and make up your own mind.  You may love it.  You may very well detest it.  You will most certainly not be indifferent.