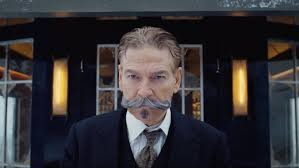 Agatha Christie’s 1934 novel Murder on the Orient Express is generally regarded as one of the author’s seminal works and with one previous big screen version and at least two television adaptations – including the David Suchet-starring version from 2010 – one has to ask what is the point of a new film at this moment in time.  Moreover, can such a re-imagination of the source material add to or enhance the text of Christie’s original work?  The Kenneth Branagh-directed film, in which the actor-director portrays the Belgian detective, tries very hard to inject new life into the story with flashy visuals, panoramic exteriors and a starry cast of suspects which, though impressive, does not quite match up to the talent which was on display in the 1974 version directed by Sidney Lumet.  Lumet’s film opened with a preamble concerning the Armstrong case which Christie had based on the infamous Lindbergh kidnapping of 1932.  The backstory which informed subsequent events was, therefore, positioned in our minds from an early stage.  A child (in this case, one Daisy Armstrong) was dead as a result of a heinous crime.  The subject of revenge did not seem like a bolt from the blue when it arose later on in the narrative.  Lumet and his scriptwriter Paul Dehn knew how to tell a story well.  It’s what’s referred to as the planting and paying-off. 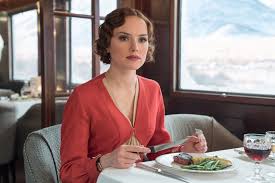 Branagh begins his film in Jerusalem with some promise and deft touches of visual flair.  The detective’s acuity and adroitness are established at an early stage for younger members of the audience who may not be so well versed in Poirot or Christie for that matter.  It helps also when we see some very familiar faces turning up in supporting roles.  There’s that girl from the new Star Wars trilogy (Daisy Ridley) playing a young English governess.  Isn’t that Johnny Depp playing the rather surly and mysterious Samuel Ratchett?  How about that Michelle Pfeiffer in another scene-stealing appearance following her recent vampish turn in Mother!  Other notables who pop up on the intended rail trip from Istanbul to Calais include Willem Dafoe and Branagh regular Derek Jacobi.  Judi Dench barely stretches herself in the role of Princess Dragomiroff.  Penelope Cruz one senses on the other hand has more fun as an atoning religious nut named Pilar Estravados.  One has to hand it to Branagh for assembling such an array of talent, but once again I must direct you back to the previous 1974 version which featured an even greater ensemble.  Consider, if you will, the names of screen luminaries such as Lauren Bacall, Anthony Perkins, Richard Widmark, John Gielgud, Sean Connery, Vanessa Redgrave, Ingrid Bergman, Martin Balsam and – in the part of Poirot – Albert Finney. 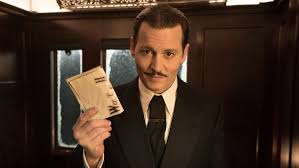 The central premise will be very familiar to those who have watched previous screen iterations or read the book.  The ill-mannered American Mr. Ratchett (played by Depp in this version) approaches Poirot during the course of the journey and appeals to him to act as a sort of bodyguard.  Portraying himself as a slightly askew businessman, Ratchett claims that some threats have been made upon his life.  For that very reason, he carries a gun on his person at all times.  The American believes an attempt may be made even before they reach Calais.  This comes to pass indeed during the following night at which point a snow avalanche strands the train and its passengers.  Christie’s book then takes on something of a holding pattern.  Determining for himself that the perpetrator of the homicide must be among the occupants of the car, Poirot interviews them one by one.  Various slips of the tongue do not pass unobserved by him, a plethora of connections to the aforementioned Armstrong case make themselves manifest in his mind.  Whereas Lumet and Dehn chose to adhere quite faithfully to the Christie template here, Branagh resolves to throw in a pursuit scene and even a gun-toting moment to up the ante.  As with the 1974 screen version, the production values are of the highest order, but some of the CGI-influenced exteriors are a tad transparent.  Was I the only one in the audience who thought some of these were practically akin to Robert Zemeckis’s The Polar Express?  Perhaps I’ve just seen too many films involving locomotives trundling through the snow for my own good. 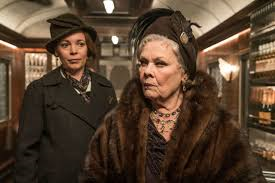 Branagh’s depiction of Poirot attempts to flesh out the renowned sleuth in terms of a personal backstory and a meticulous – even obsessive- compulsive – eye for detail.  Early on the famous Belgian (who rather self-importantly refers to himself as ‘probably the greatest detective in the world’) is shown examining eggs as if he had little else to be doing; later on – and at various intervals – we see him gazing at a sepia-toned photograph of a woman whom he calls his love.  Such deviations aside, there is little original here which is of real substance and one suspects that Branagh, the director, and scriptwriter Michael Green could conceive of little else to do with the original novel.  Murder on the Orient Express is most famous perhaps for its eventual denouement which I will choose not to reveal here for those who have not seen the film or read the novel.  Suffice it to say that Branagh attempts a new orientation in this regard as well and viewers of the Lumet version will surely remark upon the way in which the actor chooses to set some of the scenes – particularly the story’s most pivotal sequence – outside the confines of the train carriage.  Which is not to say that this version of Murder on the Orient Express is a total let-down, but one must question the need for this new adaptation or the reason why 20th Century Fox chose to make it at this particular moment in time.  A perfectly serviceable vehicle in every sense of the word, this latest Murder is by no means an insult to the original text, but it never properly gets up a head of steam and those of us who have seen the Sidney Lumet film will remain steadfast in our opinion as to which one is the superior version.