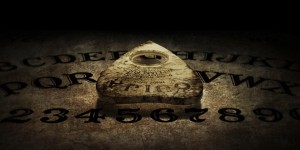 Everyone’s entitled to one good scare at Halloween, as that line from the famous horror film goes, and Ouija: Origin of Evil should certainly not disappoint aficionados of the genre and supernatural generally.  Positioned as a prequel to 2014’s Ouija (a box office hit, but extremely poor effort if reviews are to believed), Origin of Evil’s action takes place in 1967 before man walked on the moon and as the Vietnam War continued to rage in Southeast Asia.  Bogus fortune teller Alice Zander (Elizabeth Reaser) stages fake seances inside her suburban home in order to pay the bills.  Aided by her two daughters – Lina and Doris – Alice has a nice little scam on the go which she justifies as a comfort to loved ones seeking closure with their dearly departed.  Her intent is to help these people she explains to nine-year-old Doris.  The family unit itself also needs such assistance in monetary terms.  Dad has been killed in a road accident and a foreclosure notice is looming.  Meantime, older daughter Lina has attracted the attentions of an older boy at school, something that Alice is none too happy about. 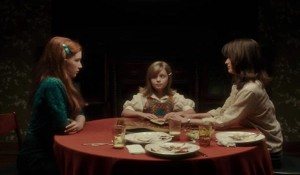 A secret meeting of friends brings Lina into contact with a Ouija board and she suggests that her mother incorporate this into her supernatural act.  Alice rigs the board but, unbeknownst to her at first, her younger daughter takes a particular interest in the new prop.  Doris’s engagement with the spiritual world comes to the rescue it seems when she uncovers a secret compartment in the basement which contains several wads of much-needed cash.  She explains that she is capable of contacting her father and a subsequent session with the talking board convinces Alice that her daughter possesses such powers.  But this is not a story about a whimsical reuniting of course and quite soon it’s apparent that all is not right with Doris; if indeed she is still Doris at all.  Enter Father Tom (Henry Thomas), a genial priest who has some skeletons in his own closet and attempts to unravel the strange goings-on in the house which also has its own skeletons – literally. 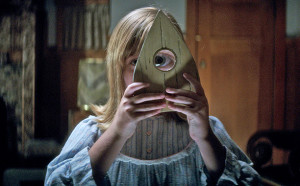 The shocks and scares in Origin of Evil come thick and fast and, as I previously mentioned, will more than satisfy fans of this type of film, particularly at this time of year.  Origin of Evil has a nice blend of several tropes from the horror genre including the haunted house, the seeming need for an exorcism to be performed, a taut period piece and an eerie kid wrapped up in a nice neat scary bundle.  The cast fares well here too, particularly Lulu Wilson who, as Doris, perfects a lingering spooky scare.  Elsewhere we have ET’s Henry Thomas turning up as Father Tom, and Elizabeth Reaser anchors her performance quite nicely as practical Mom and charlatan medium.  Director Mike Flanagan (Hush, Absentia, and Before I Wake) has extensive experience in this field and the screenplay by him and co-writer Jeff Howard propels the piece along with suitable momentum and attendant suspense.  At a tight running time of just 100 minutes approximately, Origin of Evil does not waste much time in terms of getting down to its set purpose which is to deliver on the expected jump moments.  This Halloween you could do a lot worse than see this one.  All in all, a proper horror film with, of course, the very last scare saved for that final frame.