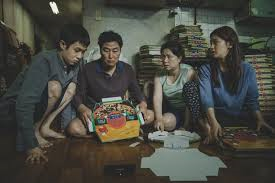 The winner of the Best Picture Oscar at the 92nd Academy Awards is a thing of narrative beauty and audacious storytelling.  Like the very best social satire, it operates on an apparently fundamental level, but contains stark commentary with respect to a wider societal context.  From the opening frames of the film, director Bong Joon-ho and his gifted cinematographer Hong Kyung-pyo tell us everything we need to know about the underprivileged Kim family.  Residing in a small semi-basement apartment that affords a view at eye-level only, the family fold pizza boxes, struggle for wi-fi connection, and watch as inebriated men urinate outside their window.  The family of four (father Ki-taek; mother Chung-sook; son Ki-woo; and daughter Ki-jeong) are badly in need of a stroke of good fortune and it comes their way when a friend of Ki-woo’s offers him an interim job as an English tutor to the daughter of a wealthy couple.  Seizing the opportunity with appropriate zeal, the canny Ki-woo quickly identifies several openings in the household whereby his three other family members may be able to obtain gainful employment for themselves.  Within days of accepting his own terms of reference, his sister Ki-jeong poses as an ice-cold art tutor/therapist for the Park’s young son.  The positions for the Kims mother and father require more overt acts of supplanting and manipulation.  Naturally, Ki-taek is an excellent driver who corners smoothly according to the duly-impressed Park patriarch.  The most impressive unseating of all occurs when the Kims take advantage of the Park’s long-term housekeeper’s allergy to peaches in order to install Chung-sook.  It comes as no great surprise that she is more than adept in the kitchen.  But the most crucial component of this ruse is that the family must maintain the facade that they do not know one another, that they have never met previously in any walk of life. 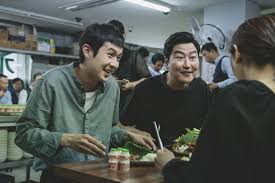 The underlying current here of course is that of social inequality.  An upstairs/downstairs motif recurs throughout the film and there are a multitude of scenes in which characters ascend and descend staircases.  In the case of the Kims, the seismic move from their semi-basement apartment is rife with significance and the promise of seemingly better times to come.  Over a family meal at a buffet-type cafeteria, the clan members discuss the possibility of a new home whereby they can escape the squalor of the streets.  A pivotal sequence which occurs much later in the film (involving a monsoon rainstorm) is a master-class in visual storytelling.  Returning to their flooded apartment, the various family members seek out objects and memorabilia which have a personal significance for each of them.  As water gushes and sewage surges from below ground, the implications could hardly be more readily apparent.  The photography of the aforementioned Hong Kyung-pyo contrasts such scenes with the ordered world of the Parks’ household where the architecture of the domicile is near-perfect and pristine.  A domestic structure has seldom seemed more like a personification as represented here.  The house is emblematic of a world which the Kims can only guess at, but which they aspire to, in particular Ki-woo.  A blossoming romance between him and the Parks’s daughter suggests an alliance in the future which may be the salvation of the Kims.  But there are hidden depths (literally) in the house and a backstory which the poorer family are not aware of until one eventful night. 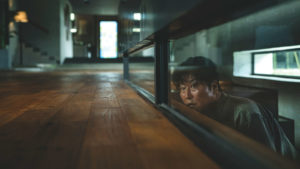 The screenplay by Bong Joon-ho and Han Jin-won has a plethora of twists and turns the like of which would be pleasing to a modern-day Dashiell Hammett or Raymond Chandler.  The latter half of the film takes the audience down an inexorable path which few could have guessed at during the breezy first hour of ingratiation and subterfuge.  Suffice it to say that the Kims do not have it all their own way as they strive to dominate the household and cajole its occupants to their own design.  In a moment of no-small significance, Ki-taek reflects on how the best-laid plans come unstuck owing to the vagaries of luck – ‘When there is no plan, you can’t go wrong’ he duly surmises; ‘Because life cannot be planned.’  In this corner of the world, we are more than familiar with the expression that God laughs when we make plans and Bong Joon-ho – for my money at least – is tapping into this particular sentiment.  The aforementioned monsoon-like sequence and subsequent events in the lower depths of the Park house serve to remind us that the universe – even in the context of such a microcosm – can never be entirely controlled or bent to one’s will.  The film’s denouement is not for the faint-hearted, but a modicum of hope is extended in the closing moments if the viewer chooses to interpret it thus.  Above all else, the difficulties of contemporary living for the lower class are pivotal themes in Bong Joon-ho’s overall thematic design and the divisions which exist in a society of this nature are emphasised by some telling visuals and cutting remarks as delivered by some of the principal characters.  The Parks are not unlikable human beings, but they are evidently divorced from the realities which the lower echelons must engage with on a daily basis.  Fortunately, the filmmakers never resort to a didactic tenor to convey their insightful messages.  Parasite is much too smart a film to be as obvious as this. 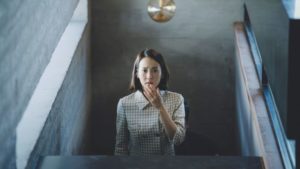 The first non-English language film to win the coveted Screen Actors Guild Award for Outstanding Performance by a Cast in a Motion Picture, Parasite features some exceptional performances, most notably those of Bong Joon-ho regular Song Kang-ho (Ki-taek), Choi Woo-shik (Ki-woo) and Cho Yeo-jeong (Park matriarch Choi Yeon-gyo).  It’s a superb effort by the cast generally as each actor perfectly complements the work of the director behind the camera and also with respect to scripting duties.  The winner of the Palme d’Or at the 2019 Cannes Film Festival also, this is a dark satire of the very highest order and the efforts of Bong Joon-ho, his technical team and cast are more than worthy of the many kudos which have been directed their way.  Fully deserving of its status already as one of the best films of the 2010s.