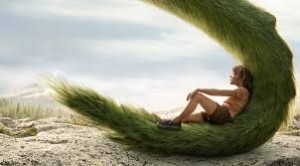 Finally, in a summer of some serious misfires and out-and-out duds comes a film with real heart which ticks all the boxes in terms of fantasy, adventure, drama and some nicely-tuned comic moments.  A remake of the 1977 live-action/animated film of the same name (which would not readily spring to mind as one of Disney’s better efforts), Pete’s Dragon is a delight of an offering from the House of Mouse which is surely a standout for film of the summer season.  Helmed by Ain’t Them Bodies Saints writer-director David Lowery, Pete’s Dragon tells the story of a five-year-old boy who, following a car accident and the death of his parents, befriends a benevolent dragon in the woods whom he names Elliott.  Time skips forward some six years and Pete is still residing in the woods where he has not had any meaningful human contact.  He observes people from afar, including a forest ranger named Grace Meacham (Bryce Dallas Howard) and a lumberjack crew led by Gavin (Karl Urban) who is the brother of Grace’s boyfriend Jack (Wes Bentley).  The couple have a daughter called Natalie (Oona Laurence) who is approximately the same age as the orphaned Pete. 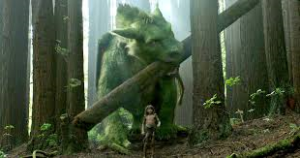 Natalie’s curiosity is piqued when she spies Pete in the woods; she follows him and subsequent events re-establish his link with civilisation.  Following a short stay in hospital, and a nicely choreographed escape attempt, Pete returns to the forest with Natalie, Grace and Grace’s father Mr. Meacham (a fine turn as always from Robert Redford), a man renowned amongst the children in the area for his stories of dragons.  Pete introduces his giant friend to the girl and adults, but, of course, danger is not far away in the form of Gavin who sees an opportunity to raise his own stock in the community.  A capture reminiscent of King Kong is set in train and Pete must find a way to free his friend back into the wild where he can remain unfettered and removed from the dangers man presents. 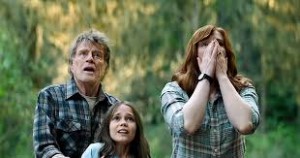 At a running time of approximately 100 minutes Pete’s Dragon powers along with fine momentum and does not shy from its sentimental flourishes.  The dragon is light years apart from the varieties we’ve seen in Game of Thrones and quite vulnerable in the absence of his human friend who he needs just as much as the boy does him.  The film which keeps coming to mind when watching Pete’s Dragon is Spielberg’s E.T.  It’s not just because of the coincidence of names – Elliott in Spielberg’s superb fantasy was the boy who encounters an extra-terrestrial – but rather the notion of a hidden friend who will surely be prodded and examined to the nth degree by adults intent on analysing and exploiting a creature that is out of the ordinary.  Karl Urban’s character appears to have a plan to exhibit the dragon in order to further his own ends.  But not everyone agrees with this, least of all Redford’s perceptive Meacham: ‘So you captured it, and now what?’ he challenges Urban in an undersea tone.  Indeed Gavin seems to have no overarching scheme as such.  The lure of somehow rising above his station leads him to boast that only he and his men know how to properly handle the enormous creature.  Not so.  This is a film where the children are resourceful by way of the characters of Pete and Natalie.  Both Oakes Fegley and the aforementioned Laurence strike the right notes throughout.  As does the film itself.  This is a bright fantasy that is warm and cuddly without being so in an overly-maudlin way.  But be prepared for a few heart-warming moments towards the denouement as well.  Remember the Disney rules.  The audience usually gets what it wants. 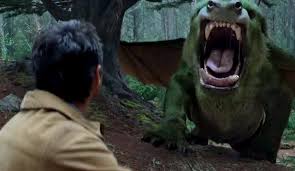 Lowery has done an absolutely terrific job in re-imagining one of Disney’s lesser entries.  His screenplay and direction posit different themes from friendship to environmental concerns (de-forestation anyone?) without feeling the need to absolutely sledge us into weepy submission.  The special effects and CGI are all top-notch and render a character in Elliott that exudes warmth and personality.  It’s refreshing in this CGI-laden era of ours to feel for an entity that isn’t quite flesh and blood.  A stellar cast acquits itself well too with the two kids, Redford and Howard filling out their respective roles particularly well.  Montenegrin cinematographer Bojan Bazelli optimises the New Zealand locations at his disposal.  Meantime Lowery has picked out some playfully appropriate tracks such as Something Wild, Nobody Knows and So Long, Marianne for his background music.  The original score by Daniel Hart does no disservice to the overall proceedings.  Having moved through a summer of over-hyped offerings and half-baked storylines, it’s refreshing to remind ourselves that a simple narrative (boy meets dragon, dragon protects boy, boy saves dragon) executed well is still sufficient grounds to take delight in what cinema can offer us.  Pete’s Dragon is indeed such a delight.  All concerned can take a fully deserved bow in this quite beautiful achievement.  Well done Elliott.