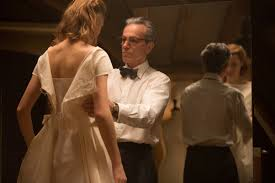 Set in post-war 1950s London, director Paul Thomas Anderson’s Phantom Thread focuses on a meticulous fashion designer named Reynolds Woodcock (Daniel Day-Lewis), a man who insists on rigid routine and detests deviations from the quotidian.  We first encounter Woodcock as he quietly but quite viciously spurns his latest lover at the breakfast table.  The perfectly innocent offer of a pastry is somehow the straw that breaks the camel’s back.  Reynolds soon converses with his sister Cyril (Lesley Manville) and the two agree that his live-in lover must leave.  The original screenplay by Thomas Anderson drip-feeds us information about the essentially insular world which Reynolds occupies.  Persons of glamour, heiresses and members of royalty and nobility come to him to be attired for weddings and other such ostentatious events.  Reynolds seems to venture very seldom from his working domicile.  An early trip to his country seat however does occasion his meeting a younger waitress named Alma (Vicky Krieps).  Appearing to be clumsy at first, Vicky soon impresses the fastidious Reynolds with her ability to memorise his lengthy and lavish breakfast order.  A relationship which may be best described as oblique develops between the two.  On their very first date, Reynolds takes Vicky’s measurements assisted by the ever-present Cyril.  Soon the younger woman moves in and becomes his muse and assistant.  A sexual dimension is hinted at but never explicitly stated.  Reynolds bids Vicky good night on her first stay in the house and her intermittent narrative informs us that they often rose early to work in the mornings. 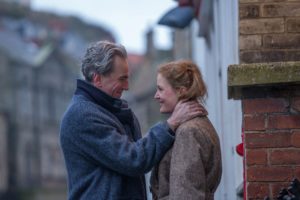 Paul Thomas Anderson has visited themes of obsession and compulsive behaviour in the past, most notably in 2012’s The Master and 2007’s There Will Be Blood (which also starred Day-Lewis).  The alternating disposition of his central characters is also a particular feature which has pervaded his work.  Reynolds is a perfectly charming suitor at first and the attraction which Vicky feels towards him is entirely credible.  He is honest, open and attentive.  During their first meal he speaks of his departed mother with a heartfelt sincerity.  But the fixated side of his character is also put on display here – Reynolds informs Vicky of how he keeps a lock of his mother’s hair close to his own person.  Later on, he has a visual hallucination of her in a wedding dress which he himself had designed.  The cracks and fissures in their relationship soon come to the surface in other ways.  A particularly memorable breakfast scene (one of many in the film) has Reynolds complain about the noise created by Vicky as she simply butters her toast.  The icily calm Cyril (a superlative Manville) attempts to explain her brother’s need for order as he goes about his daily business – if the day begins with such distraction, then he never quite recovers himself in an artistic context. 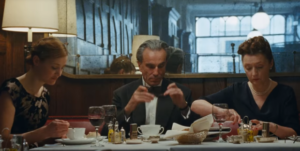 The artistic temperament which so dominates Reynolds character is of particular fascination when one considers the extraordinary actor who brings this figure to vivid life.  Day-Lewis’s methodical approach to his work is long since the stuff of legend and there is an especial poignancy at play here if this does prove to be his very last performance.  Once again, the actor is in superb form and he’s well complemented by the aforementioned Manville and little-known Krieps.  1950’s London is beautifully captured by Anderson who, apparently, doubled as his own cinematographer.  The music of regular collaborator Jonny Greenwood is sumptuous, albeit a tad over-employed at times, and there is a welcome appearance by Brian Gleeson who plays an attending doctor on the receiving end of Reynolds’s ire. 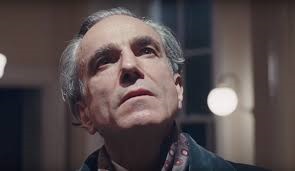 Paul Thomas Anderson remains one of the most singular filmmakers working in America today and again displays his unique knack for positing moments of silent malice and simmering tension.  Those with a particular aversion to mushrooms might best be warned to avoid this one like the plague and, in truth, Phantom Thread may not be to everyone’s taste generally.  But here is one of the great films of 2018 already as far as this reviewer is concerned and in Day-Lewis’s central performance we once again have a creation of that actor’s making to marvel at.  Let’s hope in earnest that he has a change of heart over the coming years regarding his decision to retire from the screen.  A return at any point in time will be most welcome.  Hopefully the great actor will not remain in artistic exodus for as long as forever.