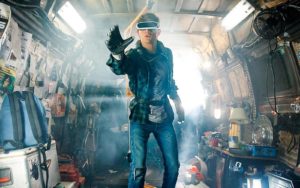 ‘People come to the Oasis for all the things they can do, but they stay for all the things they can be,’ Tye Sheridan’s Wade Watts declares at the beginning of Steven Spielberg’s big screen adaptation of the 2011 Ernest Cline novel of the same name.  By his own admission, Wade’s name is a reference to comic book heroes such as Peter Parker and Bruce Banner, but the teen does not possess extraordinary powers in this vein and, like many, seeks escape from a life and world which are beyond humdrum and barely tolerable.  The year is 2045 and what we are seeing is a dystopian world which is painfully reminiscent of Blade Runner.  Slum-like conditions are all too commonplace and much of the world’s population has been reduced to living in stacks such as the unlikely hero of the piece.  In order to escape such a prevalent sense of debasement, many engage in the virtual reality world of the Oasis which has been designed by the late James Halliday (Mark Rylance fast becoming a Spielberg regular).  An Easter egg has been hidden by Halliday within Oasis and the first player to discover this will gain unconditional control of this virtual reality world.  Born in the year 2027, Wade is one of these egg hunters known simply as Gunters.  He plays the game to forget the harsh world in which he exists; both his parents are dead and he lives with his maternal aunt and her abusive boyfriend in the aforementioned stacks. 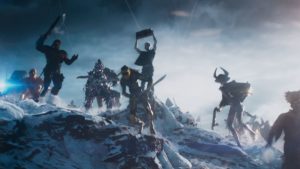 The particular appeal of Cline’s novel for Spielberg is readily apparent and the author himself must chuckle somewhat at the irony concerning the director who translated his words into cinematic images.  The 71-year-old filmmaker is after all the man who practically invented and most certainly set the bar for the event movie and blockbuster.  The 1970s and 1980s in particular proved fertile ground in this regard as films such as Jaws, Close Encounters of the Third Kind, Raiders of the Lost Ark and E.T. the Extra-Terrestrial stormed the multiplexes.  Let’s also not forget that Spielberg served as executive producer on pop culture icons of the era such as Gremlins and Back to the Future.  Ready Player One is replete with references to such films and is generally a perfectly tolerable throwback to the decade of the 1980s generally.  The early employment of Van Halen’s Jump will bring a sentimental smile to the faces of those of us who effectively grew up during this relatively heady decade.  Elsewhere, we have visual reminders such as the DeLorean car from Back to the Future, Chucky from Child’s Play and The Iron Giant (though, admittedly, this latter character emanates from the 1968 novel by Ted Hughes).  The world of the Oasis is suffused with such iconography and the in-jokes and intertextual references come so thick and fast that a repeated viewing would be justified in the home entertainment format.  It’s hardly surprising, therefore, that Spielberg and his fellow producers spent a number of years securing the rights for some of the copyrighted elements used in the film. 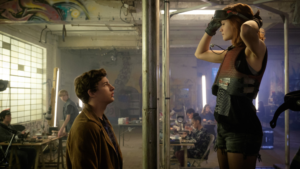 There are murky corporate powers at work in the background of course and the spirit of Halliday’s enterprise has been perverted to a sizable extent in the intervening years since his demise.  Chief among these are Nolan Sorrento (Ben Mendelsohn), the CEO of a video game conglomerate who wishes to gain control of Oasis and further his market share of the industry.  Some pertinent points are duly lodged regarding the disparity between the real and fantasy worlds.  Wade himself appears to be a life-long gamer who is somewhat awkward and socially inept.  The similarities between him and his hero Halliday are unmistakable and the young man is reminded of the importance of relationships and substantive human contact.  A romance which brews between his avatar (named Parzival) and Art3mis (aka Samantha Cook, played by Olivia Cooke) is followed with some narrative interest as is develops in the real world.  Spielberg being Spielberg cannot resist some of the romantic strains which Cline’s novel may not have been quite so emphatic about.  Meantime, Stanley Kubrick fans (this reviewer included) will no doubt enjoy the sequence in which Wade and his fellow players enter the Overlook Hotel, the setting for the director’s 1980 adaptation of The Shining by Stephen King.  Just for good measure, and a bit of fun, a Kubrick lookalike is inserted into the proceedings.

Ready Player One is hardly vintage Spielberg and pales in comparison to the likes of Jaws, Close Encounters and Raiders.  The director who brought us more recent entertainments such as Jurassic Park, Minority Report and The BFG still knows how to assemble these packages though some of us may take a little exception to the film’s overall length and its all-embracing attitude to CGI.  That having been said however, let’s remind ourselves again that this is the director who has set such a high standard in the past and still knows more than a little about delivering high octane entertainment.  Ready Player One may not be the greatest story Spielberg has ever told, nor does it have in its armoury particularly weighty themes, but it is nonetheless a science fiction adventure well above par.  A fine cast includes the aforementioned Sheridan, Cooke, Mendelsohn and Rylance.  Master of None’s Lena Waithe excels as a female player who poses as a member of the opposite gender in the world of Oasis.  Simon Pegg pops up to pleasing effect as a co-creator and estranged friend of Halliday’s.  The script by Cline and Zak Penn does justice to the source material.  The photography of cinematographer Janusz Kaminski captures the mood and ambience of both the real and imagined worlds.  A Spielberg film which may not rank high in his canon, but, nevertheless, is interesting and certainly not devoid of its charms or appealing characters.