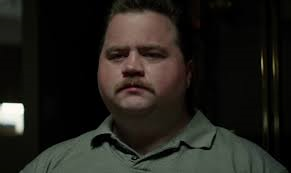 Focusing on the aftermath of the 1996 Centennial Olympic Park bombing in Atlanta, Georgia, the new film from director Clint Eastwood tells the story of a lowly security guard named Richard Jewell whose due diligence saved lives and then had his own life turned upside down by a subsequent trial by media.  As portrayed by the excellent Paul Walter Hauser, Jewell is a straight-talking everyman who respects authority and believes in the governing power of the establishment.  At an early point in the film we are given the sense that his diligence and commitment to his job may cross the acceptable boundary somewhat when he is fired from his job as a security guard at a private college for exceeding his jurisdiction.  Flash forward to the Olympic Games held in Atlanta in 1996 and Jewell appears to be crying wolf every so slightly again when he observes a suspect package during a rock concert.  When the bomb contained within detonates, it transpires that Jewell’s attentiveness has in fact saved lives.  Initially, he is heralded as a hero.  News stations wish to interview him, photographers follow him wherever he goes and a publishing company even wants to attain the rights to his life story. 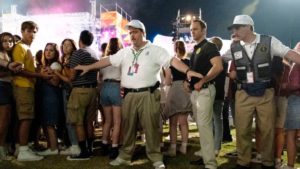 But then matters go awry quite quickly and the script by Billy Ray (based on a 1997 Vanity Fair article by Marie Brenner) essays the manner in which the media turned on Jewell in the most callous of ways.  Deemed a suspect in the very bombing which he helped to mitigate, Jewell undergoes a severe trial by media.  He is referred to derisively as Bubba the Bomber by one such establishment; on television the breaking news seems to have already decided on his guilt.  Eastwood has examined this thematic territory before – namely the plight of the everyman hero thrust into the spotlight who subsequently feels the weight of blame as accusations are levelled against him.  I’m thinking here of 2016’s Sully in which Tom Hanks played the titular character.  There are several comparisons which one can make between the two films and the most pertinent one perhaps is the fact that both men are genuinely gobsmacked by the manner in which they are treated having done the right thing.  In Sullenbereger’s case, it’s on account of having ditched his stricken aircraft on the Hudson River.  In Jewell’s particular case, it’s owing to the fact that he was conscientious in his job and followed the correct protocol. 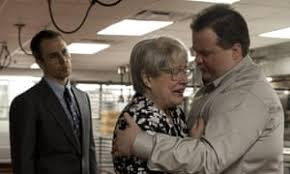 Sully – the film – was not without its controversy (the portrayal of the NTSB) and Richard Jewell has garnered some negative reviews in this respect as well.  Most troubling of all is the depiction of reporter Kathy Scruggs as played here by Olivia Wilde.  In a very simplified version of the truth – one suspects – Scruggs is represented as an archetypal reporter villain who will stop at nothing to get her story and make her name.  In one particular scene she offers sex as a lure to FBI agent Tom Shaw (Jon Hamm) in this regard.  Later on, a supposed demonstration of regret for the part she has played in Jewell’s defamation feels much to like an after-thought.  It’s a one-dimensional picture in this regard and there’s not a whole lot Wilde can do with the part.  Jon Hamm is somewhat wasted as well and certainly deserves better than this.  Is the attraction of working with the living legend that is Clint Eastwood too great for these otherwise fine actors to turn down?  I’m not sure, but I do know that they can do a lot better. 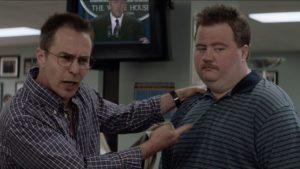 Fortunately, Richard Jewell does feature three very fine performances from the aforementioned Hauser, the Oscar-nominated Kathy Bates as his doting Mom and the ever-excellent Sam Rockwell as his attorney friend Watson Bryant.  On the technical side of the fence, Eastwood’s unadorned approach to his craft is evident as always and the script by Ray registers on the emotional scale without ever becoming overly maudlin.  A press conference scene involving Bates’s character allows that actress more than ample opportunity to show her considerable skills.  The rapport between Hauser and Rockwell’s characters is also an especial delight.  The film never quite lands the decisive dramatic blow, but there’s little doubt that this story of an injustice was one which deserved to be told in spite of the passage of time.  The real-life Richard Jewell died in 2007 at the age of 44.  It’s far from vintage Eastwood – given some of the fine productions the director has offered us in the past – but it’s nevertheless a timely reminder that he remains a relevant film-maker with much to say about the state of the world and the dynamics which inform it.