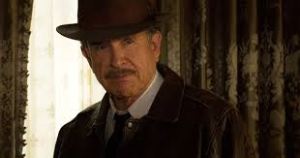 Warren Beatty’s first feature film in 16 years is his own long-cherished project on American businessman, aviator and philanthropist Howard Hughes (‘billionaire, not millionaire’ as the great eccentirc declares himself during the film).  It’s 1958 in Hollywood and aspiring actress Marla Mabrey (Lily Collins) has come to the city of angels with her mother Lucy (Annette Bening) under contract with RKO Pictures.  The mysterious figure of Hughes looms large for the first 20 minutes or so of the film and, when he eventually does appear, it is fitting that it is amidst the shadows of a darkened room.  The characters who scuttle about Hughes, answering to his every barmy whim and absurd request, include Levar Mathis (Matthew Broderick) and Frank Forbes (Alden Ehrenreich).  Frank, like Marla, has just arrived in Hollywood and is under the employ of Hughes as a driver.  Like the young ingenue from Virginia he has ambitions as well (real estate as opposed to acting) and regards his work association with the entrepreneur as being a possible stepping stone to even greater things.  But getting access to Hughes is highly problematic as both soon discover and, when it does come about, it is entirely on his terms and in settings which speak volumes about both his power and peculiarity. 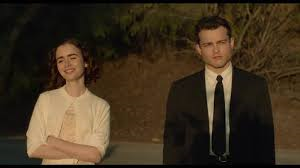 Employees of Hughes are required to adhere to several provisos and one of these is that no two individuals can have enter into a romantic liaison; this especially applies to the contract actresses who are said to be some 28 in number.  Marla – a devout Baptist who has never taken a drink and does not not recognise bawdy talk – struggles with this when such an attraction becomes apparent between her and Frank (who himself is a Methodist with a fiancee in Fresno).  Hughes, who meantime is having legal and financial difficulties with his behemoth of an airplane and TWA, is increasingly paranoid about being committed to an institution.  He learns that marriage may be a means of avoiding such a terrible eventuality, not that this informs the night he subsequently spends with an upset and drunken Marla (who has had a very fleeting liaision of her own with Frank).  Discovering that she is pregnant, Marla attempts to relate this to Howard – who has decided to watch his own film Hell’s Angels over and over and will only speak to her by telephone.  The less social and charming aspect of Hughes’s personality – and his attendant disorder – do not bode well for this conversation, and Marla leaves in tears informing Frank that he will never get anywhere with Hughes because Hughes is everything her mother had warned her about. 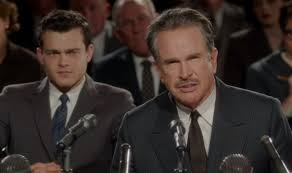 Rules Don’t Apply becomes an almost different film from this point on as it increasingly focuses on the billionaire himself rather than the star-crossed couple.  Seeking to avoid a range of issues such as taxes, legal wranglings and persistent publicity, Hughes drags the faithful Frank and Levar to various locations around the world such as Nicaragua, London and Acapulco.  In the English capital, the accident-prone aviator takes Frank and a somewhat stuffy colonel (Steve Coogan) for a bizzare and potentially dangerous excursion through the skies.  And herein is part of the fundamental problem with Rules Don’t Apply.  Yes, it is a very nostalgic and mostly affable love letter to a bygone era from Beatty (who also collaborated with Bo Goldman on the screenplay); in this latter regard, let’s not overlook the fact that Beatty himself (who recently turned 80) was making his own way in the world at this time and seeking that big movie break which would come with 1961’s Splendor in the Grass.  That Hughes was a film director and producer also is clearly a pertinent point with respect to Beatty’s fascination with the character.  The glamour and attendant razzmatazz of Hollywood has featured in a film of his before (1991’s Bugsy) and there is some discernible commentary in Rules apropos the film industry of the time as the old studio system was gradually petering out and making way for the rise of professional representation as opposed to contract employment (those 28 young ladies, as mentioned previously, would never be under the wing of a figure like Hughes in this day and age where such a practice would be more than frowned upon and in an era where such notional and entirely vague promises of stardom would not do at all).  The cult of personality is touched upon in Rules prior to Hughes’s first appearance, but he becomes demystified thereafter, particularly as he sobs into a phone and tells his new CEO Robert Maheu (Alec Baldwin) that he does not want a father figure.  The ultimate pathos of the character and his preposterous impulses are increasingly laid bare as he sits in a screening room by himself obsessing over varieties of ice cream and insisting that his underlings only communicate with him by phone.  There may very well be an inherent problem here which Beatty and Goldman cannot overcome in terms of making a film about an individual who alternated between moments of brillance and sheer ludicrousness.  And herein is another difficulty with Rules in that it is not a Howard Hughes biopic in the sense that Martin Scorsese’s 2004 Leonardo DiCaprio-starrer attempted to be, nor a much smaller, more tightly-knit piece, along the lines of 1980’s Melvin and Howard.  To call it a romantic comedy is potentially misleading as well and one has to conclude that, just like its central character, Rules Don’t Apply is someting of a cinematic misfit.  Its themes are similarly difficult to pin down.  At one moment it does indeed appear to be a romantic story concerning the attempt to transcend a weird and oppressive condition; then its a latter-day commentary on the era its set in; next we have the persona of Hughes in full flight as he scares his co-pilot and Forbes half to death.  But there are merits here as well.  The cinematography of Caleb Deschanel is fittingly gorgeous and the performances of Collins and Ehrenreich are well up to the mark.  Beatty reminds you of what he can do as an actor and there is still that twinkle in his eye which informed performances in the past such as 1975’s Shampoo.  It’s also a testament to the sway and pulling power he exerts with respect to his supporting cast which includes the aforementioned Broderick, Baldwin, Candice Bergen, Martin Sheen, Paul Sorvino and Ed Harris (blink and you might very well miss him).  There are clear comparisons between the actor/director and the character he portrays: enigmatic, elusive and absent from the screen for what’s seemed like an eternity.  Rules Don’t Apply will not feature high up in the Warren Beatty oeuvre when it comes to be looked back upon, but it is a divering piece nonetheless and, one senses, more than just a passing reflection by its star on a time he once knew.