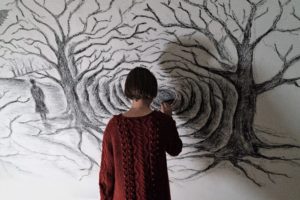 Based on the real-life abduction of a young boy in retaliation for his father’s co-operation with the authorities against the mafia, Sicilian Ghost Story is an adept and affecting drama which draws on elements of fantasy and mythology.  This 2017 Italian film, which is set largely in a small Sicilian village on the edge of a forest, begins with strains of Shakespeare’s Romeo and Juliet.  Luna (Julia Jedlikowska), a spirited young teenager with a penchant for art, is very much taken by Giuseppe (Gaetano Fernandez), an attractive boy who she only seems to know in passing from her school.  Their moments together are fleeting, but replete with the promise of tenderness and perhaps love.  But Giuseppe has a background which is informed by some sinister forces.  His father has played an active part in organised crime, but has now turned informant as we later learn.  Luna’s parents are understandably unsettled by any association between the two.  Her near-glacial mother mockingly refers to him as ‘your knight’.  But the lure of first love cannot be resisted.  Luna wishes to see Giuseppe again outside the environs of her school.  She promises to try horse-riding at his suggestion and is more than happy to exchange a brief kiss. 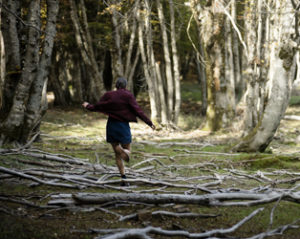 The burgeoning relationship is quickly shattered in a material sense when Giuseppe disappears without apparent trace.  In a subsequent flashback, the filmmakers reveal how Giuseppe is tricked by his captors on the premise that he will be reunited with his father.  In this respect, the story closely follows the events surrounding the kidnapping of Giuseppe Di Matteo in 1990s Sicily.  The boy was held prisoner for over two years before his eventual execution at the hands of his captors.  The co-directors Fabio Grassadonia and Antonio Piazza (who both also collaborated on the script) do not dwell long on the actual imprisonment, nor do they present scenes of graphic torture.  Instead, they conjure a story by way of Luna’s character which is fictional in this historic sense.  The primary focus of Sicilian Ghost Story (a deliberate yet telling misnomer by the way) is on Luna’s character and how she processes her classmate’s disappearance and the seeming collusion and very palpable silence which she sees all around her.  Refusing to accept the fact that the good-looking teen will probably never be released, Luna resorts to various coping mechanisms, some of which are based in reality, some of which draw on her active imagination and inclination towards the expressive.  Tangible efforts on her part include repeated visits to Giuseppe’s house and the passing out of leaflets in the village square; more other-worldly iterations involve the dark and canopied world of the nearby forest and a lake which has a mysterious entrance. 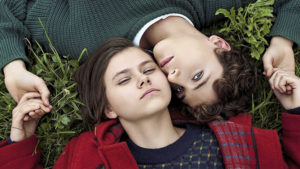 Watching this quite beautifully shot and exquisitely staged fantasy-drama, I was reminded somehow of Peter Weir’s masterly Picnic at Hanging Rock (1975) which also involves the disappearance of several characters, albeit in a different era and under more obscure circumstances.  Like Weir’s film, the directors and their cinematographer, Luca Bigazzi, have chosen to make extensive use of the indigenous landscape, its flora and fauna and native species.  From a more dramatic point of view, the camera-work also quite often implies an unseen presence that is constantly gazing upon the central characters, particularly the heroine.  Luna – as played by the excellent Julia Jedlikowska – is well deserving of this latter designation.  Ardent and determined by nature, the teenage girl will not be appeased by her clinical-sounding mother or the powers-that-be who have come to very few conclusions as to Giuseppe’s fate.  Jedlikowska is well-matched by her co-star Fernandez and much of Sicilian Ghost Story’s lingering power and emotional resonance pivots on the superb performances of these two young newcomers.  A central question which the filmmakers posit relates to the extent of love itself and how deep the individual should personally immerse themselves in this universal emotion.  At various points the audience is asked to consider Luna’s position and her robust yet limited experience.  We are reminded that this is her first encounter with love as she perceives it.  Is her reaction to Giuseppe’s abduction disproportionate in light of their very brief liaison?  Is she unreasonable with respect to her subsequent actions and general attitude?  The passage of time is well marked by Grassadonia and Piazza and this, in itself, provokes some other questions in the viewer’s mind.  At what stage should the love of a lost one be moderated to some degree?  When does it become appropriate for the individual left behind to resume their own life and pursue new passions?  There are no easy answers in truth and the filmmakers present us with no pat solutions in this regard.  Instead, what we have is an inherently stimulating story with fine young actors and an ethereal quality.  High praise deserving to all involved for this haunting piece based on a true and shocking event.