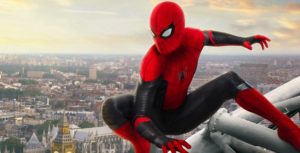 The latest Spider-Man movie is a slight but thoroughly enjoyable adventure which has our superhero on a road trip of sorts around Europe where he is pitted against apparent enemies from without and within.  This reviewer is assuming that you have not been living in a cave these past few months and are aware of how those final moments of Avengers: Endgame played out.  It’s a couple of months since Thanos’s defeat and the subsequent demise of Tony Stark.  Like half of the world’s population, Peter Parker (Tom Holland) is attempting to resume his life following the so-called ‘blip’ (Avengers: Infinity War, in case you’ve forgotten) and also coming to terms with the death of his mentor and friend.  A void of no small significance is still palpable for him and he hopes to fill it on an upcoming school trip to Europe.  The object of his romantic interest MJ (Zendaya) is a fellow companion on the excursion, as is Peter’s best buddy Ned (Jacob Batalon).  Other returning cast members include Jon Favreau as ‘Happy’ Hogan and Marisa Tomei as May Parker. 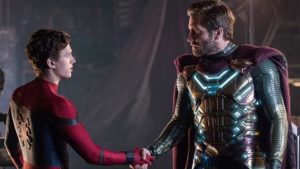 Still somewhat distraught from the events of a few months previous, and less than comfortable with the apparent avenger legacy which he has inherited, Peter’s only wish is to keep his head down and advance his relationship with the aforementioned MJ.  Others have different ideas of course.  Among them are Nick Fury (Samuel L. Jackson) who is only too aware of the clear and present threats to Earth in the new world order – in the absence of an Iron Man and a Captain America.  Pursuing Parker to Venice, the former director of SHIELD advises of a new danger by way of the otherworldly Elementals.  A super-powered man by the name of Quentin Beck – who claims to hail from an alternate Earth in the Multiverse – has dedicated himself to battle these aliens and he and Parker join forces to good effect in Prague.  But Beck, aka Mysterio, is not quite what he appears to be and it’s not long before Peter is regretting a monumental decision taken on his part.  The central question of the movie then – as posed by Fury at one point – is whether Peter the man and Spider-Man the superhero can step up in the face of this new challenge.  Can Spider-Man fill the sizable gap left by Iron Man?  Is he man enough to accept the duality of his role and the responsibility thrust upon him by the likes of Fury and the deceased Stark? 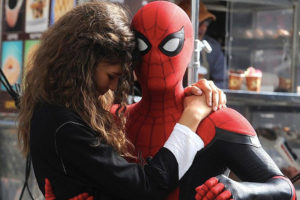 The Marvel Cinematic Universe (now at its twenty-third installment) has clearly reached something of a thematic crossroads and some of the attendant problems are evident in this new Spidey movie.  For one thing, the question which recurs is where do the filmmakers go from here.  Returning director Jon Watts and writers Chris McKenna and Erik Sommers do their best to infuse this new entry with a consequential dimension, but there is an abiding sense that this is something of a holding pattern until a fresh narrative impetus is arrived upon.  A mid-credits sequence and a post-credits sequence point the way somewhat, but the film does not have the gravitas of the two most recent Avenger films.  By no means am I suggesting that this is the worst thing imaginable.  If anything, Far From Home continues with the playful streak of its predecessor Homecoming.  Peter – the high school teenager – is still an awkward kid with anxieties and insecurities.  Tom Holland confirms our suspicions that we are watching the best actor in the role to date (remember this effectively is the second movie reboot for the character in this century alone).  He is aided and abetted in this respect by the excellent geek that is Jacob Batalon’s Ned and Zendaya’s affable and alluring MJ.  But compared with Homecoming, Far From Home lacks something of a narrative punch.  There is no scene in the new film to compare with that of the one where Michael Keaton’s Adrian Toomes figures out who Peter really is as he drives him and his daughter to their homecoming dance.  The essential point that I’m making here is that this feels a smidgen thin when contrasted to some of the other MCU entries, including Homecoming.  The central threat to the world on this occasion – that of advanced projectors and elaborate illusions – is not quite in the same ball park as some of the other more tangible perils of the MCU.  And the eventual goal of the villain of this piece is oblique to say the least. 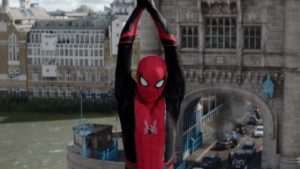 There is still much to enjoy in Far From Home and – as per usual – the intimate, more personal scenes work far better than the set-pieces which are top-heavy with CGI.  Holland – as I previously mentioned – continues to excel in the title role and he is more than ably supported by the likes of Jackson, Favreau, Tomei, Batalon and Zendaya.  The casting of Jake Gyllenhaal is one of the more curious elements of the film, but the critically-acclaimed actor fares fine as the mysterious Mysterio.  In one particular scene, the filmmakers draw attention to his physical similarity to Robert Downey Jr. and thereby tap into an on-going theme of the orphaned teenager seeking out his adult role model.  We are reliably informed that a third film in the series is planned on account of the mid-credits sequence which contains some far-reaching implications for Spider-Man and Peter.  One would imagine that the ante will be upped following this, the stakes far higher.  In the meantime, this will more than do as a slice of popcorn entertainment from the good people of the MCU.