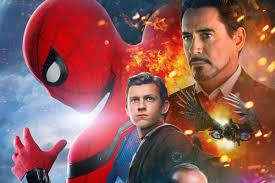 At a pivotal moment in Spider-Man: Homecoming, Robert Downey Jr.’s Tony Stark berates the teenage Peter Parker/Spider-Man (Tom Holland) for being reckless, for putting his life at risk as well as those of ordinary citizens.  ‘I wanted you to be better,’ he tells the young man in a telling remark which has as much to do with his own irresponsible past as that of Peter’s, ‘I’m gonna need the suit back.’  Understandably despondent at these words, Peter sees the horrible shadow of obscurity looming large should he lose the trust and backing of the famous Avenger forever.  ‘But I’m nothing without this suit!’ he protests.  ‘If you’re nothing without this suit, then you shouldn’t have it,’ Stark replies.  Spider-Man: Homecoming is the first stand-alone film for the costumed crime-fighter (created by Stan Lee and Steve Ditko) in the ever-expanding Marvel Cinematic Universe, but, happily, it’s not yet another origins story in which the teen spends the first act of the story discovering his super powers and deft agility.  Instead, we have here a Spider-Man who is already established and set in his crime-fighting predilections – well sort of.  Spider-Man – as you will recall – made his first MCU appearance in 2016’s Captain America: Civil War in which he was sought out by Stark to assist him in a certain fracas he was having with the shield-bearing Cap.  The central narrative of Homecoming takes place in the aftermath of Civil War as Peter returns to his normal life in Queens following his brief flirtation with those avenging super-heroes.  The teen has enjoyed the taste of this other life and hopes to become an Avenger in the mould perhaps of an Iron Man one day.  He lives with his Aunt May (Marisa Tomei), but continues to steal out at night in order to further his growing celebrity status.  The modern-day world is his oyster and its media tools are potent instruments in this design.  Not surprisingly, there is a reference to YouTube.  In a breezy and extremely fresh opening sequence, Peter records the events leading up to his participation in the Leipzig/Halle Airport encounter between Stark’s forces and Captain America’s.  But Peter becomes increasingly frustrated as the weeks and months pass and Stark does not come knocking on his door again.  He complains that he is being treated like a kid, which indeed he still is as his best pal Ned Leeds (the excellent Jacob Batalon) points out.  A kid who can stop a bus with his bare hand is no ordinary kid to be sure, but Peter still has much growing up to do.  The central question posed for the character in Homecoming is can he be content in being just a, ‘friendly neighbourhood Spider-Man,’ as Stark succinctly puts it.  Should he have notions and aspirations beyond the realm of his own community?  And what sort of responsibility does this entail?  Is he ready for battles of a more universal and consequential scale as Stark is well versed in himself? 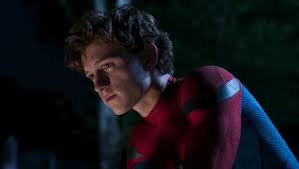 The latter suspects that he isn’t of course and in this regard you may remember a scene from the aforementioned Civil War in which Iron Man instructed the costumed Parker to stand down.  The tuition at some remove continues in Homecoming as Tony instructs his former head of security ‘Happy’ Hogan (Jon Favreau) to lend Peter a hand when he can and offer general advice.  Stark and Hogan are hardly paragons as surrogate fathers go and an increasingly frustrated Peter complains when they seem to ignore the red flag he is waving with regard to shady weapons dealings which are afoot on his home patch.  The villain of the piece on this occasion Adrian Toomes (Michael Keaton) is an embittered middle-class family man intent on giving the preferential capitalist system a taste of its own medicine.  Forced out of a lucrative contract to clean up the city following the Avengers’ Battle of New York, Toomes encourages his men to collect and harvest the Chitauri technology they come across in the debris.  Eight years later he has perfected his own suit of armour and wings which is not terribly dissimilar to that of Stark’s.  His motivation as a father and family man is reasonable, even if his societal ethics leave quite a lot to be desired.  Toomes wishes to provide for his loved ones.  Billionaires such as Stark care little as far as he is concerned – ‘The rich, the powerful like Stark, they don’t care about us.’  Keaton’s performance as his mechanical-laden alter ego Vulture is a little one note, but he fares much better as Toomes – one scene in particular is a standout which you will recognise when you see the film.  And I would recommend this second reboot of Spider-Man to both fans of that particular character and the MCU generally.  It’s far superior to the first reboot series which became all too patchy by the time of its second film.  In contrast, Spider-Man: Homecoming never gets weighed down by franchise building or allegorical subtexts.  It’s a tribute to director Watts and to the team of scriptwriters who number six in total including Watts himself. 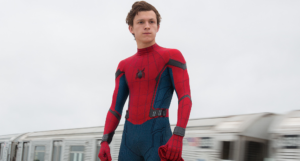 This is a fast and fun Spider-Man that does not take itself too seriously, but instead grapples – quite often to amusing effect – with everyday problems and hindrances.  The character, who was first created in the early 1960s continues to engage and endear because he is just a kid coming to terms with a seismic change in his life.  Naturally, we will guffaw when his careworn Aunt May mistakes this for teen angst and changes brought on by the onset of puberty.  Of course we will identify with him concerning the pretty girl in the class Liz (Laura Harrier) who appears just a little outside of his reach and most certainly outside of his league.  Watts and his fellow writers unearth even more layers of fun when the equally nerdy Ned inadvertently discovers Peter’s true identity – ‘You were on the ceiling!’ he exclaims before hounding his best friend with a barrage of questions, the vast majority of them inane but appropriately side-splitting. 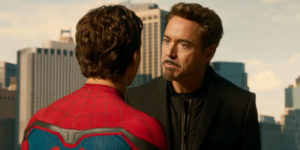 The best director and writers in the world could deliver the perfect template for a Spider-Man tale, but the film itself ultimately fails or succeeds based on the actor in the titular role.  Rising English star Tom Holland more than suggested that he was up to the task in 2016’s Captain America: Civil War and he builds substantially on the part here delivering the best performance yet as the webbed one.  He is ably assisted by the likes of Tomei, Downey Jr. and Favreau in support, but the intimate highlights of Homecoming may be found in his affectionate and humorous exchanges with Batalon as Ned.  Zendaya – of Disney Channel fame – scores well as Peter’s highly intellectual yet distant classmate Michelle and The Grand Budapest Hotel’s Tony Revolori is a hoot as Peter’s chief school rival Eugene ‘Flash’ Thompson.  On a technical level, Spider-Man: Homecoming is precisely what you would expect it to be, but, thankfully here there is a fitting pre-eminence given over to good old-fashioned storytelling and warm characterisation.  In terms of set-pieces, a bravura scene at the Washington Monument is a particular stand-out leading the devoted and somewhat in-awe Ned to ask Peter how it feels to be so famous without people knowing who he really is.  This in many ways is the central theme which Spider-Man: Homecoming addresses and it is also the mantle which Stark tells him he must endeavour to attain.  In order to become a true hero, the boy must first become a man and that man must – by necessity – realise the importance of values such as trust, responsibility and humility.  Spider-Man: Homecoming teaches such lessons with great verve and winning humour.  It doesn’t get bogged down, but soars just like its leading man.  One of the best of summer 2017.  Also one of the best in the MCU to date.  The boy done good.