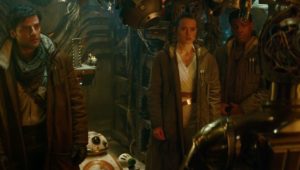 The final installment in the Star Wars franchise trio of trilogies is by and large a solid and entertaining space drama replete with highly effective set-pieces and emotional swells designed to appeal to long-standing fans of the series.  The new film, we should remind ourselves, had a slightly problematic inception.  Jurassic World’s Colin Trevorrow was originally slated to direct The Rise of Skywalker (as it was subsequently titled), but he departed the project on the basis of creative difficulties with producer Kathleen Kennedy.  The Force Awakens’s J. J. Abrams was a safe pair of hands to turn to in the absence of an alternative director.  Abrams did a fine job with the seventh chapter of the series reminding audiences as he did of Star Wars’s best narrative elements as well as successfully merging new blood in the cast with some very familiar and beloved faces.  If The Force Awakens reminded many (including myself) of Star Wars – A New Hope with respect to the template it followed, then The Rise of Skywalker must similarly bring to mind many elements of 1983’s The Return of the Jedi (the furry Ewoks are even captured on screen for a brief moment towards the film’s conclusion).  The basic premise is thus – the Resistance (spearheaded by Leia (the late Carrie Fisher), Rey (Daisy Ridley), Finn (John Boyega) and Poe (Oscar Issac)) is not exactly in the best of shape since the events of 2017’s The Last Jedi.  When the stony-faced Kylo Ren (Adam Driver) obtains a Sith wayfinder and discovers a former Star Wars villain still living on the uncharted planet of Exegol, the chief protagonists of the rebel alliance determine that a mission must be undertaken before the First Order becomes the utterly indomitable force in the universe which it strives to be. 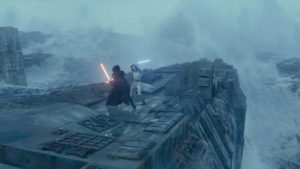 Abrams and his co-writer Chris Terrio (Argo) are at seeming pains to propel the action and underlying narrative for this first third of the film.  There are umpteen references to the need for hope and optimism in the face of apparently incalculable odds.  You can probably guess how it goes from there.  The mission in hand is the mantra and the principal characters all get on board in spite of any reservations they might harbour.  C-3PO (Anthony Daniels) has some of the best moments in this section of the film as he constantly declares his own safety to largely unmoved ears.  There is the most welcome return of Billy Dee Williams’s Lando Calrissian to take in and duly divert us from some of the story’s glaring shortcomings.  The special effects are top-notch as one would expect and the various swells of John Williams’s iconic score still deliver an adrenaline rush.  If anything, the proceedings are quite akin to an Indiana Jones spectacle with the laden allusions to Sith texts, inscribed daggers and faraway locations which must be traversed in order for the Resistance to have a chance of survival.  When Rey locates the much-vaunted wayfinder on the remains of the second Death Star, I was personally reminded of the moment in Raiders of the Lost Ark as Harrison Ford discovered the Well of Souls.  It’s all very serviceable stuff, but there’s little in the way of originality or adventurous storytelling.

Abrams does hit his stride more so during the second third of the film and there are several reminders of how effective a filmmaker he is when it comes to this type of entertainment.  An excellent duel between Rey and Kylo and the reappearance of Luke Skywalker’s X-wing fighter are two of the highlights of this particular section.  Performance-wise the film is led by the excellent Oscar Issac as the intrepid Poe and Driver as the ever-conflicted Kylo.  Richard E. Grant and Domhnall Gleeson fare well also as the First Order’s more prominent faces; ditto that also for Ridley and Boyega as the Resistance’s leading lights.  Mark Hamill’s Luke Skywalker makes his expected appearance in spite of his demise at the conclusion of The Last Jedi.  On the technical side of things, the various combats and battles in space are as good as one could hope for without the CGI becoming too overwhelming.  The aforementioned John Williams score will always add emotional gusto whatever the circumstance. 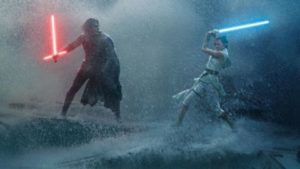 It’s all ultimately designed to bring closure to the saga that is Star Wars and the film’s final third does get weighed down with narrative exposition and an inherent need on the filmmakers’ part to tie up many loose ends.  There is an inevitable sense that Abrams is trying to get this one over the line and he employs every trick in the book to elicit emotional responses from us the audience.  A sidebar story of redemption – which is as old as the hills – is clearly telegraphed, but Abrams gets away with it just about.  This is Star Wars after all and the bottom line is a story about the triumph of good over evil, the prevailing of the force of light in the shadow cast by darkness.  The denouement will surprise absolutely no one and therein lies that word serviceable once again.  Most familiar and far from original, but nonetheless something of a fitting conclusion to this nine-part series which has been around these past 40 years or so.