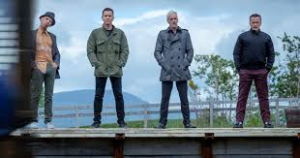 ‘You’re a tourist in your own youth!’ Simon ‘Sick Boy’ Williamson (Jonny Lee Miller) yells at Mark Renton (Ewan McGregor) as the former friends visit yet another familiar vista from Danny Boyle’s 1996 generation-defining film, and indeed nostalgia is the prevailing sentiment in this 21st century follow-up which incorporates elements from Irvine Welsh’s titular novel and its sequel Porno.  Some 20 years after he betrayed his pals in London (with the exception of Spud), Renton has returned to his native Edinburgh following a long hiatus spent in Amsterdam of all places.  But he’s managed to stay clean for all that time; only a cardiac episode and the break-up of his 15-year marriage have prompted his belated homecoming.  Reconciling with Spud first (who, by the way, is none too grateful for the money he received from Mark feeding his lingering heroin addiction as it did), Renton moves on to Sick Boy who is less receiving.  An extended brawl in the washed-out pub the latter is now running later the pair tentatively reconcile, but tensions between them remain.  The first of several lies takes place as Mark spins a story about two children who don’t even exist.  Bemoaning his recent separation and health scare, he fears the future as much as he regrets the past.  ‘They told me I was good for another 30 years,’ he says, ‘but they didn’t tell me what to do with those 30 years.’  The ‘choose life’ speech of the final moments from the 1996 film seem a distant memory.  Mark is middle-aged and without apparent direction.  Spud is Spud without a job, but nevertheless the moral fabric of the group in a Buster Keaton sort of way.  Sick Boy has his underhanded schemes as usual involving bribery and extortion.  Meantime, Francis Begbie (Robert Carlyle) is concocting his escape from prison.  This isn’t an aligning of the stars, but director Danny Boyle and scriptwriter John Hodge are intent on serving us up a series of vignettes and knowing allusions to the original film.  Which is either a strength of T2, or a severe shortcoming depending on your point of view. 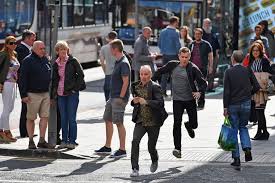 There is still much to admire here despite the multiple references to its predecessor’s narrative core.  The performances of the four central players are more than up to scratch, and new-girl-on-the-scene Anjela Nedyalkova holds her own as Veronika Kovach, a Bulgarian associate of Sick Boy’s who entertains his plans to convert the isolated pub into a leisure centre with certain added benefits for its clients.  Elsewhere, Kelly MacDonald briefly reprises her role as Diane, the only character from the original film who appears to have made a success of her life.  There’s a nice touch of humour here as Mark mistakes her hourly legal rate as the total estimated bill.  Irvine Welsh turns up again as Mikey Forrester; veteran Scottish actor James Cosmo also has two short interludes as Mark’s Dad.  Boyle and Hodge are not in the least bit shy of alluding to the work that set them up in both their respective careers.  T2 even turns in on itself with a sidebar concerning how the original novel may have come about.  Spud finds a counter addiction as suggested by Renton in the very act of writing.  The flashbacks continue apace, but the story on offer here is far from a simple copy and paste job.  These are individuals who have become visibly older and stagnated in a potentially horrible way.  Diane warns Mark that the alluring Veronika is much too young for him.  Anyone with a workable knowledge of the original film will surely chuckle when they remember the morning after in her parents house as it becomes apparent she is merely a schoolgirl.  And who could possibly forget poor Spud’s plight as he attempts to leave his girlfriend’s house with a certain stained bed sheet.  Try as it does, T2 is unable to emulate such memorable moments.  But perhaps it’s unfair to expect it to try.  As a stand-alone entity it has its moments and pointed reflections on the past.  Sick Boy reminds Mark of how he introduced their late pal Tommy to drugs and so played a part in his untimely demise; Mark barbs back about Sick Boy’s infant who might not have died in the cot if he had not been such a mess of a father. 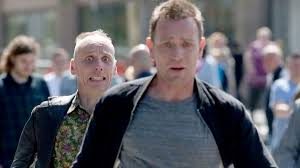 There’s not a great deal in the way of narrative trajectory here and much of the tension in T2 derives from a somewhat guilty interest as to what Begbie will do to Renton when, inevitably, they come face to face.  A nightclub toilet scene is nicely played by McGregor and Carlyle, but then descends into a somewhat tedious chase.  The eventual denouement won’t surprise too many viewers as a natural order of sorts is restored.  Ancillary characters benefit in a way that the core personalities simply cannot be allowed to.  The ‘choose life’ speech gets an airing and an updating earlier in this film, but now it serves as something of a parody.  With the exceptions perhaps of the reinvigorated Spud and the savvy Veronika, the suggestion is that none of the characters here will ever properly break out of the mould.  Sick Boy will continue serving pints to old-timers whilst hoping for that one big score.  Mark may reconcile with his Dad, but his drab domicile hardly bodes well for the future.  Begbie will return where he belongs.  In spite of the attendant nostalgia, it’s far from a romantic scenario Boyle leaves us with in the end.  But there is a nicely beefed up version of Iggy Pop’s Lust for Life to send us home over the end credits.  And for better or worse Renton and his motley crew have now been introduced to a new generation of cinema-goers.  For better methinks.  And even much better if it entices them to watch that 1996 original piece.