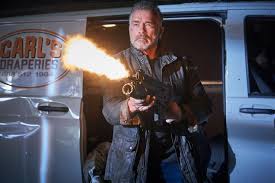 The good news about the latest Terminator film is that it is a return to form for a franchise which had latterly suffered from some heavy-handed and humourless sequels (2009’s Terminator Salvation for example) and haphazard entries with completely confusing timelines (2015’s Terminator Genisys).  As a matter of fact, Terminator: Dark Fate exists in a cinema world where we are asked to discard the narratives of the previous three films (including 2003’s Rise of the Machines).  Co-producer James Cameron has said that they occur in alternate timelines, but the fact of the matter is that the reset button had to be pressed at some stage for the sake of the franchise’s future.  The only question is have they done enough to make the series seem viable and somewhat relevant once again.  Intended as a direct sequel to 1991’s Judgement Day, Dark Fate begins in 1998 with a short prelude (and consequential moment) and then leaps forward some 22 years as a new Terminator model named the Rev-9 (Gabriel Luna) is sent back in time to Mexico City.  Arriving at more-or-less the same time as the Rev-9 is a naked woman in the form of Mackenzie Davis (Grace).  The question as to which one of these visitors from the future is the good guy (a plot device used in previous Terminator films) is soon answered as Grace protects a young woman by the name of Dani (Natalia Reyes) from the deadly advances of the new Terminator.  The precise motivation for doing so is drip-fed to us as the movie progresses, but Grace’s backstory is fleshed out more properly as she is revealed to be a cybernetically-enhanced soldier with the human resistance of the future. 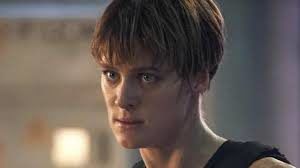 The Terminator films have always delivered some pretty stunning action set-pieces and the first one of these proper is as good as we have come to expect.  The sequence is also notable as it re-introduces the character of Sarah Connor (the returning Linda Hamilton).  You will no doubt recall that one of the previous three films in the franchise explained away the character’s death off screen, but, as I said, the slate has been wiped clean so to speak.  Hamilton is back and her return is a definite positive for this new film.  Now in her mid-sixties, the actress looks more kick-ass than ever and, happily, she is afforded some of the film’s best moments and lines.  Teaming up with Grace and Dani, Sarah emphasises the need to stand and fight the new Terminator as opposed to running incessantly.  She can also relate to Dani’s plight as she herself was put in this position in the past (1984’s The Terminator).  And – more pertinently – she may have a lead with respect to some much-needed help; for years she has been receiving anonymous messages apropos the arrival of more Terminators on earth.  Tracing the source of these messages, the robust female trio travel to Laredo, Texas where they discover the ageing T-800 (Arnold Schwarzenegger) which has been living with a family for the past 22 years.  The familiar face of the Austrian actor is again a distinct plus for the film, just as is Hamilton’s return.  The veteran stars enjoy the best exchanges of the film as the unlikely group of humans seek to confront the Rev-9 in order to save Dani. 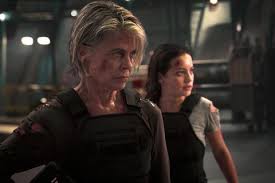 Yes, it’s more than vaguely derivative with regard to the first two films in the series, but Dark Fate works generally thanks to some fine performances (Hamilton in particular), excellent set-pieces and the assured direction of Deadpool’s Tim Miller.  A C-5 Galaxy aerial sequence and the resulting climactic confrontation at a hydro-power plant are particular standout moments in terms of the action, but the screenwriters (David Goyer, Justin Rhodes and Billy Ray) also provide some telling exposition during the quieter moments of the film (with especial regard to Dani and Grace’s shared past).  With an estimated budget of some $200 million, Dark Fate certainly delivers with regard to its special effects and the Rev-9 in particular involves some stunning work in this regard. 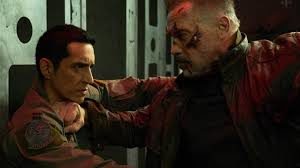 It’s impossible to say where the franchise might go from here (if at all), but, whilst not in the same league as the first two films, Terminator: Dark Fate is a distinct improvement with respect to more recent entries and delivers a satisfying emotional conclusion.  Although he’s not the director of this one, James Cameron would not doubt approve of the strong female characters which populate the film and I, for one, would love to see a further film involving Linda Hamilton’s Sarah Connor.  A much better entry than we were expecting and something of a shot-in-the-arm for an iconic science fiction franchise.  What happens next will – no doubt – depend on how well this performs at the box office.