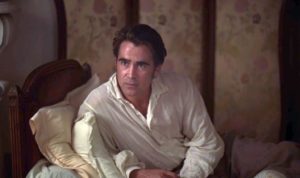 Sofia Coppola’s new screen version of the Thomas P. Cullinan novel The Beguiled is a fairly straight and serviceable adaptation starring Colin Farrell, Nicole Kidman and Kirsten Dunst.  I really wanted to say better things about this particular film, but the simple truth of the matter is that it struck me as quite ordinary and lacking in terms of innovation.  Perhaps part of the problem here was the fact that I’d just recently watched the previous 1971 version which starred Clint Eastwood and was directed by Don Siegel.  Coppola’s film opens in the same manner as a young girl named Amy (Oona Laurence) innocently collects mushrooms in the woods.  From afar there is the roar of cannon and the general hum of battle.  The American Civil War is raging and Amy is perhaps taking more than a chance by wandering so far from her school.  She comes upon an injured soldier named John McBurney (Colin Farrell complete with a strong brogue).  The scene is far tamer than in the Siegel version.  There is no illicit kiss here and the youngster does not think of her dead father.  Helping McBurney to his feet, she tells him of the girls school close by where he might receive shelter and much-needed medical attention. 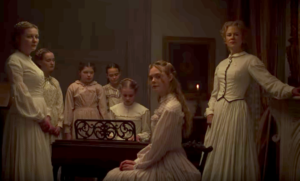 The southern Gothic feel is unmistakable (just as it was in the 1971 film), but Coppola has pared the narrative down to a surprisingly linear and minimalist trajectory.  Gone is the incest sub-plot involving Miss Farnsworth and her brother (Siegel had conveyed this by way of flashback).  Excised too – in somewhat controversial circumstances – is the character of the black female slave from Cullinan’s 1966 novel who was played by Mae Mercer in the 1971 film.  The director has gone on the record by saying that her primary focus was on the group of women themselves – their desires, jealousies and animosities – and that she did not wish to, ‘brush over such an important topic in a light way.’  That’s a more than valid point, but I still can’t help feeling that something has also been lost from the story as a whole by the removal of this character.  Hallie was a resonant character who was shown to be both strong and steadfast.  Her exchanges with McBurney were of particular significance as here was a soldier who was fighting for her very freedom.  Coppola’s script sets out the moral dilemma which the headmistress Martha Farnsworth (Nicole Kidman) is faced with upon McBurney’s unexpected arrival at her establishment.  Referring to him as an unwanted guest, she nevertheless tends to his wounds and sponges his grimy body.  The character is an Irishman from Dublin who explains that the lure of money was too great to resist when he got off the boat in the new land.  He is a deserter who has no wish to return to conflict.  Farrell’s performance for much of the film is just a little flat and one note.  Profuse in his thanks and gratitude, there isn’t a great deal of charm about this McBurney in spite of such suggestions by other reviewers.  Eastwood was allowed far greater scope and complexity in the 1971 film because his character was an out-and-out manipulator who was anxious to serve only himself.  It’s never entirely clear what McBurney’s motivation is in this new film.  Naturally, he’s only too happy with all the female attention, but there’s little to suggest that he is a grand schemer in the mould of McBurney’s previous screen incarnation.  Farrell’s performance is only raised a few notches following his metaphoric castration.  Otherwise, it’s strangely tepid and one-dimensional. 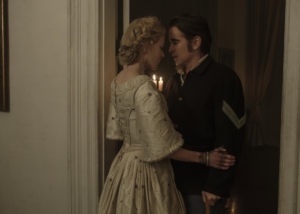 Coppola expressed an interest in this project after seeing the Eastwood/Siegel version and said that she wished to show the story from the female perspective.  In some quarters this new version of The Beguiled has been praised for its slant on the empowerment of women which is claimed to be more emphatic here.  Personally, I have to say that I saw little difference between the two films in this regard.  True that the writer-director has shifted the axis of the story ever so slightly away from its more tawdry elements of lust and incest; but the basic premise of desire remains the same essentially as McBurney arouses the attraction of both Farnsworth and Edwina Morrow (Kirsten Dunst), a teacher in residence at the school.  When he tells the latter that he loves her, it feels like an afterthought and does not vaguely smack of any underlying ruse.  The character of Edwina here is presented as a rather po-faced woman who is trapped for some inexplicable reason.  We suspect that she has little experience in the way of love or pleasures of the flesh and Dunst’s performance renders her thus.  The 1971 Siegel version took a more overt stance as regards the character – spotted washing McBurney’s injured body by the willful Carol (Jo Ann Harris) the implication was quite clear as to her maidenly status.  Eastwood’s character himself went even further later on by calling her a, ‘virgin bitch.’ 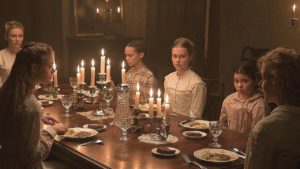 The amputation scene, which was quite graphic in Siegel’s film, is nowhere to be found here and even the climactic dinner (in which McBurney is served poisonous mushrooms) does not have the same sense of unease or antipathy.  It may seem as if I’m trying to knock this version entirely, but that’s not the purpose of this article.  2017’s The Beguiled is not a bad film and it enjoys several fine elements, not least the atmospheric photography of French cinematographer Philippe Le Sourd.  The performances of the female cast are well up to scratch with Kidman in typically solid form and Elle Fanning a standout as the bored and immodest Alicia.  Farrell – as I’ve previously suggested – is either not allowed or does not care to stretch himself until the film’s latter scenes.  Dunst – an actress I’ve admired ever since her memorable turn in Neil Jordan’s Interview with the Vampire – is somewhat wasted as Edwina.  Once more I will refer back to the 1971 film and state how I found Elizabeth Hartman much more suitably cast in this role.  I guess there may be a lesson to be learnt here: do not watch original films prior to the release of their newer versions.  On the whole, the 2017 version of The Beguiled is disappointing because it brings no new elements or variations to the story and discards some of the narrative threads which made the 1971 film of particular interest.  Not quite a disaster, but most definitely not a triumph either.