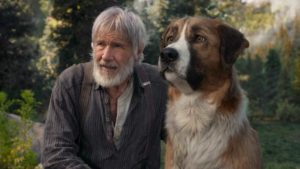 Based on the 1903 novel of the same name by Jack London, The Call of the Wild tells the story of Buck, a St. Bernard/Scotch Collie, who is forcibly taken from his home in sunny California and shipped off to the Yukon during the Klondike Gold Rush of the 1890s to work as a sled dog.  In his live-action directorial debut, Chris Sanders (How to Train Your Dragon) makes extensive use of CGI in order to depict the adventures of Buck as he engages with life in the wilderness and the other animals he encounters.  The special effects are top-notch as one would imagine and the character of Buck is captured well as he transitions from spoiled dog to community leader as the story develops.  It helps also that his main human co-star here is Harrison Ford, an actor who has always engaged audiences with his screen presence and general aura – and continues to do so here.

Sold initially to a mail delivery service operating across the Yukon, Buck learns the importance of playing his part in a team effort just as his survival instincts kick in as well.  The first major portion of the story is one of the most enjoyable of London’s source material and Sanders’s adaptation by way of Buck’s interactions with the other dogs in the team and the kindly Perrault (Omar Sy) and his worldly-wise assistant Francoise (Cara Gee).  On a thematic level, The Call of the Wild essays Buck’s rapid conversion with respect to his growing work ethic and his compassion for the other members of his team.  This is realised to good effect in this section of the narrative as he faces down the vicious pack leader Spitz and, subsequently, assists Perrault in making the long trek to the mail deposit on time.  A recurring visual motif which the filmmakers return to time and again is the appearance of a black wolf which seems to be acting as a guide for Buck on his travels.  London was deeply interested in the idea of a return to nature and the effects it might have on a character and this is one of the matters which his famous novel addresses. 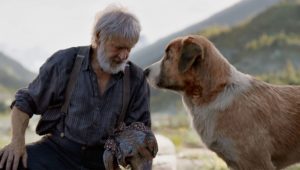 The evolution of civilisation and modernisation of the world as a whole is signalled by way of the advancement of the telegraph which forces Perrault to sell his dog when the mail route no longer proves to be viable.  A tonal shift occurs as Buck and his co-workers are sold to the callous Hal (Dan Stevens), a self-serving individual who dreams of vast quantities of gold in the Yukon.  The character of Ford’s John Thornton becomes more prominent in the film at this point as the older man takes an especial interest in Buck.  Thornton, as it turns out, is a loner who has left his wife in the wake of the death of their only son; his grief-stricken existence is largely confined to the cabin which he inhabits and is informed by the alcohol which he consumes on a frequent basis.  When Thornton rescues an exhausted Buck from the evil clutches of Hal, the animal returns the favour by putting his new master on the straight-and-narrow.  A bond forms between the man and dog which is as good as any screen offering previously committed to celluloid.  The tale truly comes into its own when Thornton and Buck travel beyond the Yukon so that they can live uninterrupted in the wild.  A recurring voice narration delivered by Ford’s character tells of how he sees a gradual change in Buck as the dog is drawn to a pack of white wolves.  The question arises for Thornton himself as to his place in the world, but no such doubt exists for Buck.  This is his proper environment Thornton informs us; this is the fate which has awaited him his whole life. 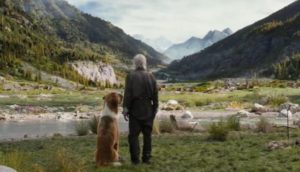 This is something in the order of the fourth or fifth big-screen adaptation of London’s novel (Clark Gable and Loretta Young – for example – starred in a 1935 version) and it’s quite clear why the story has such universal appeal.  At its heart is the theme of finding one’s place in the world and then determining to maximise all personal efforts for the good of a community and a way of life.  Buck’s journey in this sense is both literal and metaphorical.  By the film’s end, Thornton’s narration describes how he has full embraced the call of the wild.  He is at one with nature and in firm control of his own destiny.  He has evolved as the leader of the pack and understands fully the role he has carved out for himself.  Sanders’s new adaptation of the London source material has been rightly praised for its action and tone, but the CGI effects (which are undeniable) have led to some criticism.  Personally, this latter aspect of the film was not a great problem for me.  I knew full well that Buck was not a real dog, but this did not detract from the effects of the story or the sense of empathy which the filmmakers managed to create.  And – as I previously suggested – the presence of Ford helped greatly in the overall enterprise.  The 2020 version of The Call of the Wild is by no means a perfect film, but it is a compelling piece of entertainment and the theme of the importance of communal values set against that of self-isolation is a pertinent one even in today’s world.  The essential lesson here (one which the CGI Buck learns and imparts) is that a united effort counts for much more no matter where in the world one chooses to make one’s way.  And London’s message ultimately is that co-operation and mutual understanding are the pillars of a life well lived.