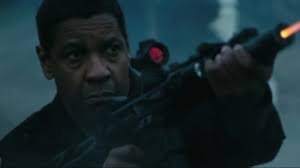 Former marine and Defense Intelligence Agency spy Robert McCall (Denzel Washington) is not the type of guy whose path you want to cross if you partake in any unwholesome activities or those with a penchant towards the other side of the law.  In 2014’s The Equalizer (loosely based on the 1980s television series of the same name), McCall displayed the quite unique skill-set he possesses.  And it wasn’t good news for the criminal and kingpins of the underworld.  As played by a typically committed Washington, McCall is a man who delivers hard justice in quite merciless fashion.  In this 2018 sequel (the first incidentally in Washington’s entire career), returning director Antoine Fuqua opens on a train some 400 miles from Istanbul.  McCall is aboard the locomotive, as are some loathsome villains who have kidnapped a young girl.  Suffice it to say that only one man emerges from the physical engagement which ensues.  Back in the United States, we learn that McCall is working as a Lyft driver.  The implication seems to be that this particular occupation allows him the opportunity to encounter members of society who are somewhat downtrodden or have backstories of a suitably poignant bent.  There is an elderly Holocaust survivor (Orson Bean) seeking out a long-lost painting of his sister; there is a young woman who has been drugged and savagely raped by a couple of privileged and contemptuous young men; closer to home, McCall takes an especial interest in the future of one of his neighbours Miles Whittaker (Moonlight’s Ashton Sanders), a young man who is being courted by a local drug gang.  ‘Keep off those corners’ he advises him in his best parental mode.  When the student questions McCall’s motives for cleaning the walls of the apartment courtyard which have been vandalised, the response he receives is blunt and unambiguous – if no one did anything, then the neighbourhood (and, by extension, the world) would be a much poorer place.  McCall – a widower – is intent on playing his part.  This is not a man who is content to retire or be retiring. 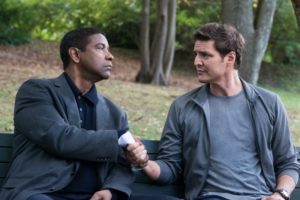 The story takes on a suitably personal dimension when McCall’s close friend Susan Plummer (played by the returning Melissa Leo) is brutally murdered whilst investigating an apparent murder-suicide in Brussels.  Reuniting with one of his former DIA operatives Dave York (Narcos actor Pedro Pascal), McCall determines to uncover the true circumstances of Susan’s death which has been deemed a simple case of theft gone horribly wrong by local authorities.  It’s not very difficult to discern the broader picture and the part York has played with respect to this.  The screenplay by Richard Wenk is hardly the stuff of great subtlety.  A vigilante action film in the mould of some of the later Dirty Harry Films, The Equalizer 2 does not pull its punches when it comes to its gritty set-pieces and the overarching message of meeting out harsh punishment to those who are deserving of such a blood-soaked fate.  Fleeting television reports of an impending storm in the Boston region (where McCall now resides) tip us the viewer off as to the likely denouement.  The somewhat forced inclusion of Miles’s character in this final showdown should hardly come as a surprise to the audience.  The primary purpose here appears to be to render McCall’s character more human and so gain our empathy.  The means justify the ends in this regard.  The fact that – unannounced – he visits one of the antagonists’s domiciles and high-fives with his kids should not strike us as remotely ominous or menacing for that matter.  In an even creepier scene which follows, we see him request a lift with that same family unit having exchanged threats with the aforementioned baddies.  This is a relentless man after all who is resolved to balance the scales – equalise the odds as the very title suggests.  Every now and again, he must push boundaries to some degree; a sinister note has to be struck in order to out the even more malevolent forces that dwell in those pretty suburban houses. 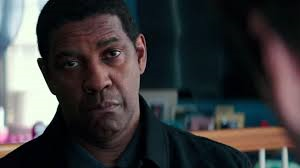 This is not film-making (or story-telling for that matter) which is in the least bit subtle as I’ve previously suggested, but it’s not without its plus points or its peculiar aura of engagement.  Unsurprisingly, the key ingredient in this respect is the star presence of Washington himself.  The two-time Oscar winner can articulate a thousand words with a single look and has the unique gift of making the quotidian seem interesting.  He’s made to work here at several points during the two-hour running time as the narrative shifts awkwardly between McCall’s daily life and the plot he finds himself entwined in following Susan’s death.  The film’s culmination like some of the other narrative elements feels clumsy and laboured.  There are no great surprises as McCall picks off those who have set out to take him and his altruistic enterprise down.  The ending of the film resembles its predecessor’s final few moments all too closely.  One cannot discount the possibility of a second sequel in this respect.  Now in his mid sixties, Washington has kept himself in immaculate physical form.  He can carry any sort of film; no role is beyond him.  It’s a strange piece – like the previous film – but The Equalizer 2 works in the oddest of ways.  Two hours could be better spent, but they are not entirely wasted either.  Quite a testament to Washington’s continuing and undiminished star power.