Movie Review: The Girl on the Train 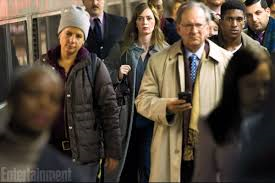 A twisty tale from start to finish which meanders as much as a coastline train journey might well do, The Girl on the Train is a pushy melodrama postulating as a murder mystery, which ultimately fails owing to its ponderous and hollow plot.  Have I given too much away already?  Rachel Watson (a dressed-down Emily Blunt) is an inveterate alcoholic who rides the train every day to New York City despite the fact that she has lost her job in public relations.  Rachel is trapped in the past and her journey through the leafy suburban environs takes her past her former abode where her husband Tom (Justin Theroux) and new wife Anna (Rebecca Ferguson) reside.  Just a few houses away are another couple whom Rachel somehow idealises as a perfect couple – Megan Hipwell (Haley Bennett) and husband Scott (Luke Evans).  A pivotal connection exists between these two pairs insofar that Megan is nanny to Tom and Anna’s child, although she has no emotional inclination to conceive with Scott.  Rachel is prone to blackouts during her boozing sessions and one of these takes place as she disembarks in the neighbourhood one fateful evening either to confront Anna (whom she despises and harasses with phone calls) or Megan (whom she suspects of having an affair with another man).  The course of her actions are clouded from us the viewer and from herself (as a result of yet another blackout), but the upshot is that Megan disappears and the worst is presumed. 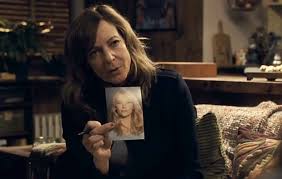 Enter the authorities then in the form of a somewhat jaded-looking Detective Sergeant Riley (Allison Janney) who has little sympathy for Rachel’s story and deplores even more so her attempts to insinuate herself into the investigation.  Approaching Scott on the premise of being a friend of Megan’s, Rachel tries her hardest to unravel the plot which she may very well be involved in herself.  This backfires quite spectacularly and poor unloveable Rachel is left once again to rue her mistakes until a chance encounter with Tom’s ex-boss Martha (Lisa Kudrow) on the – yes you guessed it – train.  This is one of several instances in the movie in which fate supposedly takes a hand in one of the characters’ lives and impels the narrative along towards a fairly lame and predictable ending.  It’s not that director Tate Taylor (The Help) or screen writer Erin Cressida Wilson have done such a terrible job here, it may well be that the source material, in the form of Paula Hawkins’ 2015 debut novel, is so replete with such convolutions that we care little about the characters on display here and their often grubby lives. 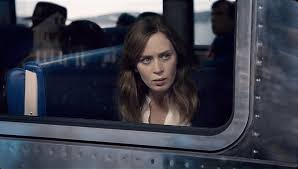 Still though, The Girl on the Train has some good points I might say in its defence.  The cast is first-rate in terms of its players with Theroux and Evans both suitably shady and with backstories which add to the tawdry ambience of the piece.  Ferguson and Bennett work hard as well in forgettable enough roles and the aforementioned Janney does her best as the police detective.  The film belongs to Emily Blunt as the titular character and she channels rage and remorse quite admirably in equal measures.  I’m not quite sure that she looks very much like an alcoholic – more like a pretty girl having a bad hair day – but Blunt manages the part well, even if she is far from the most simpatico central character of all time.  The film’s denouement, however, does leave much to be desired and does little to assuage the feeling that we the viewers have been watching a fairly slight murder mystery with the ruse of a morality play lurking somewhere in the background.  On the whole a disappointment and a misfire, The Girl on the Train will not enter either canon with any great credentials or lasting impression.  No Gone Girl here I’m afraid to say.