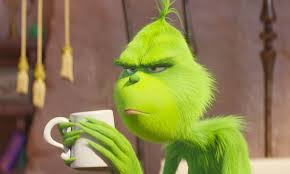 The third screen adaptation of the 1957 Dr. Seuss book How the Grinch Stole Christmas! is a fairly enjoyable animated revisiting of this classic tale which will appeal to the younger viewers without offering much in the way of originality or fresh impetus for those of us familiar with the source material.  The premise of the story is universally known even for those who have not read Theodor Seusss Geisel’s book which was written in rhymed verse and features in the Top 100 Picture Books list of 2012.  The Grinch is a curmudgeon green creature who despises the festive season in the same vein as Ebenezer Scrooge.  Living like a hermit on the snowy Mount Crumpit, with his loyal dog Max, the Grinch is described by Seuss as a creature with a heart ‘two sizes too small.’  After 53 years of enduring the nearby inhabitants of Whoville – who celebrate Christmas with an enormous fervour – the Grinch concocts a plan to steal their presents and, thereby, render the festive season meaningless in his eyes.  To this end, he disguises himself as Santa Claus and employs Max to act in the stead of a reindeer. 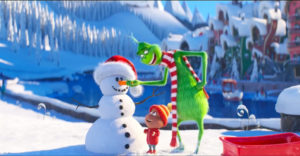 This new adaptation of the beloved Seuss story comes from the good people of Illumination who to date have delivered, among other things, the Despicable Me franchise and the Minions movie.  Watching the film with a largely younger audience (save for the parents accompanying them), I had little doubt that the kids enjoyed the 85-minute feature, but I was also struck by how few big laughs the film actually delivered.  Directed by Scott Mosier and Yarrow Cheney, The Grinch cannot be faulted for the quality of its animation and the overall sincerity of its enterprise, but it is a bit flat with respect to its gags and dialogue and does not add any extra layer of contextual substance to the source material.  Take for example the overall theme of the commercialization of Christmas which the 1957 book offered us – this is examined by the filmmakers, but not with any sense of innovation or new perspective.  Of greater interest is the parallel plot hatched by the predictably adorable Cindy Lou Who as she determines to entrap Santa Claus in order to request a special present for her hard-working and over-taxed single Mom.  Fine and novel in this reviewer’s eyes.  But the 2018 Grinch does not offer much else in terms of fresh material or ingenious sidebars.  Instead, the central plot line of the Seuss narrative is pretty much adhered to.  Fed up with the syrupy Whos and their notions of a warm, bright and congenial Christmas, the Grinch decides to exact a revenge on them which he is sure they will not recover from – steal the material items and razzmatazz which seem to be at the very core of their Christmas.  As the famous song for the 1966 cartoon special goes You’re a Mean One, Mr. Grinch. 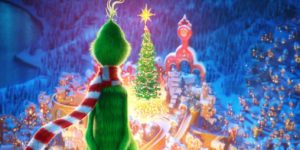 Comparisons to the 1966 Chuck Jones version – which starred Boris Karloff – and the 2000 live-action version – which starred Jim Carrey – are inevitable so let’s address them now.  Rightly regarded as a holiday classic, the 1966 television special simply cannot be touched and still sets the bar for screen realisations of the Seuss story.  But what of the Jim Carrey version?  Many of the reviews for the new film have remarked upon how it is a better film, but, personally, I’m not altogether sure.  The Ron Howard-directed film had an off-centre strain of humour and smidgen of darkness to it which – for me at least – worked in its favour.  And it’s greatest plus point was the performance of Jim Carrey himself who was a perfect fit in the role.  Benedict Cumberbatch appears as a good choice here in theory, but his voice performance never rises above the material, nor does he invest the character with any sense of palpable eccentricity or plain wickedness.  I think the problem for Cumberbatch is that he is not served by a very good script and he also seems weighed down by the peculiar accent he adopts for the part.  It’s a tad disappointing because, on paper at least, his casting would appear to be a master stroke.  Like so many elements of this film, it’s a performance which remains strangely lacklustre.  Shouldn’t Benedict be having more fun with the Grinch’s malevolent side?  Hasn’t a flavour of unconventionality served him well in the past in roles such as Sherlock Holmes and Doctor Strange?  But it’s not all negative and I would pay the filmmakers due deference for the quality of the animation and for some of the colorful set pieces – particularly on Christmas night as the Grinch literally steals Christmas.  The younger ones in the audience will lap up such moments undoubtedly.  The older ones among them might well bemoan a seasonal revisiting that could and should have delivered so much more.