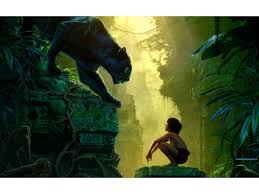 You really have to hand it to Disney!  The House of Mouse has Pixar, Star Wars and Marvel in its stables and all indicators point to its domination at the box office for some time to come.  Plus it’s also coming up with some deft new tricks if that weren’t enough.  Following hot on the heels of 2014’s Maleficent and last year’s Cinderella, the studio is also turning its attention to producing live action features of stories it has previously made as animated incarnations.  Well, in the case of Jon Favreau’s The Jungle Book, a qualification is required.  The only actor who appears on screen in this one is newcomer Neel Sethi playing the ‘man-cub’ Mowgli who has been raised by a pack of wolves.  The other actors appear under the veil of CGI, and it is really in their voice performances that this iteration of the Rudyard Kipling stories comes alive. 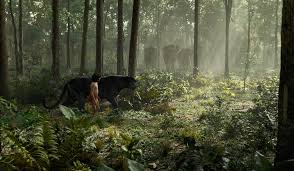 The story of course is a familiar one, and Favreau chooses not to deviate much from the source material and the 1967 animated feature.  Mowgli is an orphaned boy, rescued by the black panther Bagheera, and settled with a pack of wolves.  He does his best to adapt to this environment, but resorts to human tricks which Bagheera gently castigates him for.  When a drought besets the occupants of the jungle, a water truce is necessitated, but this brings its own problem in the shape of a terrifying Bengal tiger named Shere Khan.  Khan, in truth, is the predator that killed Mowgli’s father, but not before the latter scarred him with fire – an element the animals refer to as the ‘red flower.’  Khan is intent on revenge for this and Bagheera deems it sensible to take Mowgli to the man village for his own safety and protection.  This mission of mercy does not quite work out however and Mowgli must fend for himself following an attack en route by the persistent Khan.  Thereafter, Mowgli encounters the hypnotic python Kaa, the indolent, but loveable, bear Baloo, and of course the humongous orang-utan King Louie, who seeks the power and control of the ‘red flower’ for devices only known to him.  A final confrontation with Shere Khan follows and – well – if you know your Kipling, or have seen the 1967 film, you pretty much know the rest. 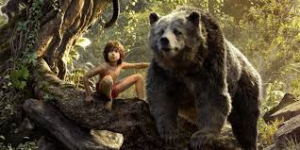 This latest version of The Jungle Book is indeed a worthy entry and, as we’ve come to expect, the visual effects are spectacular and without seeming blemish.  Neel Sethi does well enough as Mowgli, but the film belongs to the heavyweight actors who lend their voices to the animals of the wild.  Idris Elba makes for a scary Shere Khan and kids might want to be forewarned that his character is quite loathsome and relentless as depicted here.  Scarlett Johansson has a brief enough role as the deceptive Kaa; Giancarlo Esposito too as Akela; and Ben Kingsley is suitably stoic as Bagheera.  The film probably belongs to Bill Murray as the honey-craving Baloo, and he is perfectly cast, but let’s not forget the great Christopher Walken as King Louie.  More mafia overlord, as he emerges from the shadows, than orang-utan, he belts out a wonderful version of I Wan’na Be Like You, though it’s just a shame that, given his size, he doesn’t throw a few more shapes in the process (Walken himself is an accomplished dancer as evidenced in the Fatboy Slim video Weapon of Choice).

The film is family-oriented, but does depict a more realistic version of the jungle, and its many perils, than the 1967 version so parents might wish to note this in the case of very small children.  That having been said, this is a warm and exuberant realisation of the Kipling source material, and the inclusion of many elements from the beloved 1967 version, including the Bare Necessities, adds up to a more-than diverting family entertainment.  And as for Disney – as I mentioned earlier, the domination of box office for that studio continues.  The Jungle Book has already amassed a monetary haul of $565 million worldwide at the time of writing this review.  Favreau and others have also reportedly signed up for a sequel.  I would not be in the least bit surprised if they eventually expanded it into a trilogy.  And expect more of these live action versions in the very near future.  The House of Mouse likes its successful templates.  This is definitely one of them.