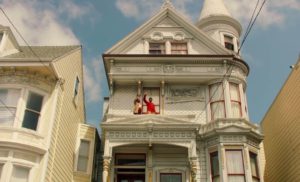 The directorial debut of Joe Talbot, The Last Black Man in San Francisco is a bittersweet ode to a city in flux and the tale of young men who are trying to find their way in the world.  Co-written by Talbot and lead actor Jimmie Fails (both of them San Francisco residents), the film tells the semi-autobiographical story of Fails himself and his quest to take back a Victorian-style house in the Fillmore District which he believes was built by his paternal grandfather.  Does it help proceedings that the creative talents behind the film are so closely connected to the city by the bay?  Absolutely.  From start to finish, The Last Black Man in San Francisco is a moving and deeply felt piece which examines a number of contemporary urban issues such as gentrification, toxic masculinity and the nature of friendship as lifelong buddies seek to re-affirm their respective places in the modern world.  The gulf which exists between dreams of the past and endeavours in the present to shape a better (even idyllic) future is also a consideration which Talbot and his co-writers examine.  Jimmie Fails (as played by Jimmie Fails himself) has such high notions about his personal past.  A house in the historical neighborhood of Fillmore is at the very centre of his world and claims much of his attention.  The family lore which Jimmie has heard down through the years has left an indelible impression upon him.  Convinced that his grandfather on his father’s side built the house in the mid-1940s, Jimmie tends to its exterior facade like a dutiful custodian in spite of the fact that it is no longer in the family name.  The current owners do not take kindly to this.  In one of the film’s several humorous scenes, the current lady of the house tosses groceries at Jimmie as he touches up some of the paintwork.  A death in her own family causes severe legal ramifications as regards the property and the house becomes idle as a result.  A gleeful Jimmie decides to take up residence along with his best friend Montgomery ‘Mont’ Allen (Jonathan Majors). 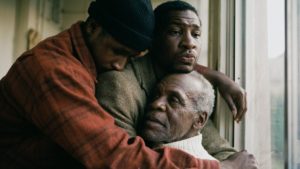 It’s not an absolute requirement that you have visited San Francisco prior to seeing this quite wonderful film, but it does help.  More to the point perhaps here is the love of one’s hometown and birthplace and I think we can all relate to that particular theme.  The city by the bay is an effective character of the film itself and Talbot imbues it with a sense of reverie as well as retrospection.  It’s not all entirely positive and, happily, The Last Black Man in San Francisco never descends into the maudlin.  In the latter stages of the film, for example, a play within a play becomes the scene of a confrontation between the two friends.  And then there is the troubling issue of toxic masculinity which pervades the narrative.  A gang of young black men who hang out close to Mont’s grandfather’s (Danny Glover) house act as a chorus of sorts, but more pointed perhaps is the inane arguing and posturing which seems to take up a good deal of their time.  When one of their group Kofi (Jamal Trulove) is murdered in a senseless act of violence (off-screen) our reaction naturally is one of abhorrence.  What is the point of a young life wasted in this manner we ask ourselves.  Yet another instance of mindless aggression taken too far we conclude.  In the meantime, Jimmie and Mont’s illegal occupation of the house in Fillmore quickly comes a cropper as an ambitious realtor enters the equation.  Time and again, Talbot emphasises the fact of a seemingly callous world intruding on the dreamy ideals of the individual.  Jimmie and Mont are both dreamers who will ultimately be disappointed he tells us.  The world is a harsh place and does not readily tolerate those who indulge the whimsical and imaginary. 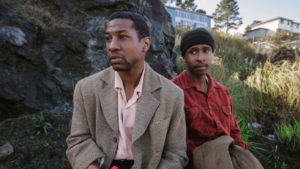 This is a beautifully crafted tale which takes its time and offers timely meditations on lives and a way of life in motion and change.  The two leads – Fails and Majors – are quite exemplary and supported perfectly by the likes of Glover and Tichina Arnold (who plays Jimmie’s aunt Wanda).  The original score by Emile Mosseri has a suitably nostalgic feel to it and the photography by Adam Newport-Berra picks out some of the iconic landmarks of San Francisco as well as less-familiar but nonetheless beautiful vistas.  The backstory of how Fails and Talbot conceived of the story (semi-autobiographical as I previously mentioned) and then set about raising the necessary capital is a marvel in its own right and perhaps deserving of a story treatment also.  It’s an inspiration to all young filmmakers out there and a telling reminder to us all that – in the right hands and with the appropriate level of artistic dedication – an essentially simple story can become a thing of great beauty.  A gem just like the city it is set in.