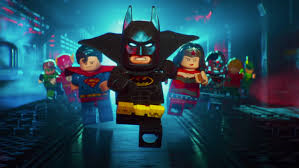 Those plastic brick characters are back for this spin-off installment of 2014’s The Lego Movie featuring that very self-referencing ‘dark’ character who just so happened to be one of the most memorable in that very busy tale.  Well first off it has to be said that The Lego Batman Movie is not quite as good as its predecessor.  There’s not the same cleverness here which informed the former film, in fact, if anything The Lego Batman Movie does follow a somewhat formulaic plot, though told with great gusto and heart it has to be said.  Visually, of course, it’s quite stunning.  The opening sequence – in which Batman foils yet another Joker-induced plot – is one such merry montage and the jokes and pop culture allusions are laid on thick and fast.  The action recedes then quite suddenly and we are in the overly-spacious halls of Wayne Manor which, in this instance, is set on Wayne Island (the filmmakers want to leave us in little doubt as to Batman’s self-imposed isolation).  This sense of separation the Caped Crusader has even extended to his great villain whom he tells, ‘I don’t need you, you’re not important to me.’  Determined to concoct a dastardly scheme will will make his nemesis appreciate his worth, the green-haired one gives himself up freely along with Gotham’s impressive array of baddies.  We are even introduced to one named Condiment King who shoots ketchup and mustard.  Meantime, Batman’s public persona Bruce Wayne is aghast at the notion of a female becoming the police commissioner of his beloved city (Barbara Gordon as voiced by Rosario Dawson).  Events take yet another grim twist as far as he is concerned when she announces her vision of law enforcement for the future with a lesser emphasis on his role as its linchpin. 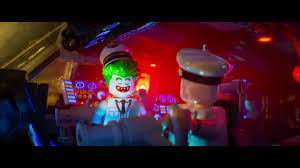 Batman’s relevance in a city without crime is in question and the masked one decides to take a proactive approach by recruiting his new ward Dick Grayson (Michael Cera) to help him steal a device called the Phantom Zone Projector.  The duo travel to Superman’s Fortress of Solitude to obtain this and return to Arkham Asylum to banish the Joker.  But Barbara doesn’t appreciate this and one severe tongue-lashing later she has the two locked up allowing Harley Quinn (Jenny Slate) the opportunity to lay her villainous hands on the device.  The Joker in turn frees a plethora of other no do-gooders from the Phantom Zone, including King Kong, the Wicked Witch of the West, Sauron and Lord Voldemort.  All of a sudden there is a clear and present need for the dark knight once again.  Did you ever really doubt there would be? 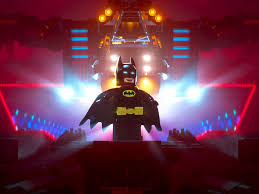 And here is the point where I don’t really need to divulge any more of the plot.  It follows a pretty much expected trajectory thereafer.  Bonds are formed, alliances cemented.  A further moment of isolation occurs, but ensuing rifts are quickly healed by many projecting lights in the night-sky.  Dick becomes Robin.  Barbara chooses the name of Batgirl.  Even faithful old Alfred (Ralph Fiennes) gets to don that campy costume from the 1960s TV series.  But don’t get me wrong in all of this; it’s absolutely great fun as it muddles its way ever so slightly to the denouement.  Even Batman and the Joker have their moment.  You will not be disappointed.  There are laughs aplenty and a multitude of star cameos among the minor characters.  But there just isn’t quite that same level of sharpness here which set The Lego Movie apart as something very special in the animated feature world.  For one thing there is no story within a story.  The Lego Batman Movie takes place in its own universe – or so it seems; an overarching human presence is only hinted at by way of some distinctively vocalised sound effects.  There is no President Business or Man Upstairs.  None of the songs come close to the exuberance of ‘Everything is Awesome.’ 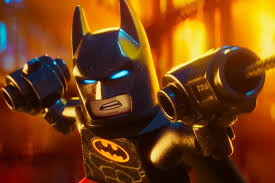 These are only aside criticisms mind and there are so many lesser ways to spend 100 minutes of your time in the cinema.  If anything The Lego Batman Movie reminds us of how bad some of those recent onscreen entities from DC Comics have become.  There is fun put back into the character of Batman here without him losing his self-important, austere facade.  The other characters around him prod him towards the light and, indeed, a more lightened approach.  Writers of the Suicide Squad and forthcoming Justice League might take note.  How many different hues of dark do we need to see?  Such pertinent questions are set squarely in front of Will Arnett’s Batman/Bruce Wayne here.  The moral of the story (yes, inevitably) is that the masked dude cannot do it alone, nor should he be expected to.  Bateastes (yes, I may just have invented that word) will take great pleasure at the number of references to previous films and that colourful TV show.  An early scene in the cockpit of a hijacked plane is an absolute hoot in this regard.  ‘Batman will stop you,’ the half-smiling pilot informs a scowling Joker, ‘your plan won’t work.  Just like the one involving the two boats.  Or the one with the parade and the Prince music.’  Worth the admission price alone for such moments.