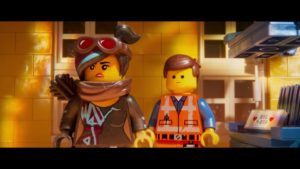 Everything about 2014’s The Lego Movie was indeed awesome as that so-very catchy tune goes.  Here was a computer-animated film which succeeded in both being extremely innovative and terrifically fun.  The voice actors were superb and the set pieces suitably detailed with a deeply-felt story which became all the more emotive at the film’s end.  Since that time, two spin-off movies have followed by way of 2017’s The Lego Batman Movie and The Lego Ninjago Movie of the same year.  The latter film I have to confess I haven’t seen, but I did enjoy The Lego Batman Movie chiefly because of Will Arnett’s performance as the dark broody one.  But there were some cracks appearing in the edifice with some overcooked jokes and obvious cultural references.  Keeping a franchise such as this one fresh and novel is no easy task.  Some preliminary praise due to Phil Lord and Christopher Miller who are on scripting duties for this one (the duo co-directed the first film as well). 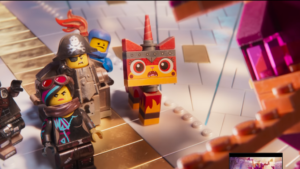 Mike Mitchell (Shrek Forever After) has taken over the helm on this occasion and the new film has pretty much picked up where its predecessor left off.  In the wake of Finn’s father allowing his younger sister to play with his Lego in the basement, aliens from the planet Duplo have invaded heralding a new and dystopian world order.  An opening sequence involving the first film’s accidental hero Emmet (Chris Pratt) reveals how these new figures apparently spurned the chance of peace and reconciliation.  Five years have passed since this time and the Duplos continue to destroy what Emmet and his fellow workers try to build.  The near-perfect haven that was Bricksburg has now been transformed into the aptly-named Apocalypseburg.  The ever-upbeat Emmet attempts to look past the wasteland he sees around him (something akin to a Mad Max movie) and presses his ideal of a dream home to the object of his affections Lucy (the also-returning Elizabeth Banks).  But Emmet cannot quite shake the recurring dream/vision he is having of an impending event called Our-Mom-Ageddon. 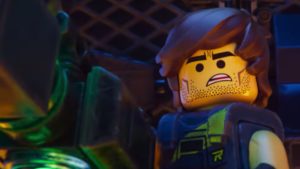 The 2014 film – which was critically-lauded and a commercial success – was never going to be an easy act to follow, but the filmmakers have delivered a very workable sequel in all of this which, like its predecessor, delivers clever metaphors and cute witticisms aplenty.  Fans of the franchise generally will delight at such sidebars as the planned wedding which is to take place between Batman (Arnett) and Queen Watevra Wa-Nabi (the excellent Tiffany Haddish).  There are also some clever nods to Chris Pratt’s familiar role as an action-adventure movie star by way of his new character Rex Dangervest.  Alison Brie as Princess Unikitty is every bit as delightful and robust as she was in the first film.  Bruce Willis turns up playing himself in two short scenes and Ralph Fiennes reprises his role as Alfred Pennyworth from The Lego Batman Movie.  Once again, there is oodles of comedy and one-liners on offer here and the animation is second-to-none.  But the new film does not have quite the same zip as its predecessor and one can perhaps best ascribe this to the fact that – four films into the franchise – this feels ever so slightly like a variation on a theme or a cut-and-paste job which is not quite as good as the version which went before it.  One telling difference between this and the 2014 film is the decision by the filmmakers to show us more of the human scenes which take place throughout the film.  I understand the dramatic point they are trying to make here (the evolving relationship between a teenage boy and his younger sister), but it just does not have as much punch as the reveal at the end of The Lego Movie.  The denouement – when it arrives – is a tad obvious and definitely not infused with the same zest as the original.  But then again, replicating the novelty factor of a film of this nature is usually nigh-impossible.  By itself, The Lego Movie 2 is very entertaining and should please adults and younger viewers alike.  It’s not quite the same level of awesome this time around, but it will more than suffice nonetheless.