There’s an unmistakable propulsive force underlying Robert Eggers new film which sucks the viewer in from the opening frame and barely allows breathing space during the course of its running time.  The Lighthouse of the title is the place where Ephraim Winslow (Robert Pattinson) and Thomas Wake (Willem Dafoe) have been commissioned to spend four weeks.  Set on an isolated island off the coast of New England in the 1890s, the environs of the film could scarcely be more foreboding.  A heightened sense of apprehension prevails and this is accentuated by Eggers technical decision to shoot the film in the claustrophobic 1.19:1 aspect ratio and in black-and-white.  The cinematography of the Oscar-nominated Jarin Blaschkle is absolutely pivotal to the artistic design.  Interior shots are appropriately narrow, even constricted; exterior scenes accentuate the pervading sense of nature as a governing force.  Forced to perform all sorts of menial chores on the island and in its man-made structures, we watch with some degree of sympathy as Pattinson’s novice wickie struggles against the inexorable rain and howling wind.  Even a one-eyed seagull takes a distinct dislike to him.  But his older counterpart warns against the killing of such a creature – ‘It’s bad luck to kill a sea bird’ he advises in one of several of Dafoe’s delicious scenes. 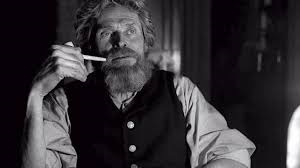 As in the case of 2015’s The Witch, Eggers’s main thematic concern is centered on the threat from inner conflict born from a growing sense of isolation.  The older man and his younger underling needless to say do not hit it off at first.  Both appear to have their respective secrets.  Ephraim refuses to take a drink with Thomas on the first night (and several thereafter) because he is perhaps mindful of the implications which may be entailed.  Wake – for his part -refers to a previous second wickie who died shortly after losing his sanity.  It’s not difficult to see why this could happen in such a desolate part of the world and Eggers is certainly keen through his visuals to remind us of this in almost every scene and exchange between the two characters.  It’s therefore of no great surprise that after the passing of four weeks, the scheduled relief does not arrive owing to the arrival of a pesky storm.  This particular juncture of the film is also marked by the alcohol-fuelled evenings which the two men spend together after Ephraim relents and partakes of the libations on offer.  The mood between the two is cordial as they belt out shanties and dance, but notably adversarial during the quieter moments of conversation and introspection.  The admission price is worth paying alone for the ‘what what’ scene and Dafoe’s subsequent monologue which is provoked by Pattinson’s less than choice remarks about his culinary skills. 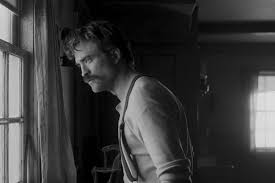 It’s a perfect two-hander with respect to the performances and Eggers is truly blessed in this regard.  Currently enjoying the form of his career, as he moves into his mid-60s, Willem Dafoe is note-perfect as Wake, the weather-beaten lighthouse keeper who seems intent on berating his younger colleague at every opportunity and delegating all manner of unenviable tasks.  That famous gravelly voice of his has seldom been used to such good effect.  The rapidly-rising Robert Pattinson, on the other hand, channels every morsel of resentment and regret in his Ephraim Winslow to superb effect.  Guarded at first about his previous existence as a timberman, the younger man soon comes to rue a major reveal about his past.  Meanwhile, visions of a mermaid (Valeriia Karaman) and his on-going spat with the aforementioned seagull indicate a tortured mind surrendering itself to gradual depravity.  The latter half of the film is replete with instances of boozy imbibing and frenetic acts of self-gratification.  No good can come of this we know and the denouement which ensues does its utmost best to stay in step with the disquieting tenor which has preceded it. 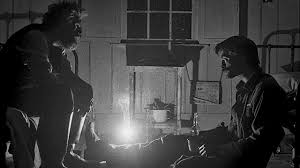 As with The Witch, this is a wonderfully atmospheric piece which tells a core tale of madness and pervading paranoia.  Begun as an attempt by Eggers’s own brother Max to adapt The Light-House by Edgar Allan Poe, this is a psychological piece rather than horror just as The Witch was less about overt terror and more about Gothic fear.  The film’s conclusion will doubtlessly be pored over, as will the recurring suggestions that much of the events which unfold may be playing out in Ephraim’s own mind as he surrenders to the lure of alcohol and visions of debauchery.  On a personal level, I can’t say that I truly believe that Eggers concluded this in the most satisfactory of ways, but I generally applaud the film-maker for his innovative approach, verbose visuals and for the ambience which is second-to-none.  The best part of The Lighthouse however is the two lead performances and Dafoe and Pattinson certainly deserve the kudos they have been receiving thus far.  Unsettling and haunting in equal measure.