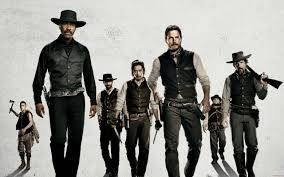 Antoine Fuqua’s remake of the 1960 John Sturges classic western of the same name (which, remember, was itself a remake of a certain 1954 Kurosawa Samurai film) is, as a stand-alone piece, a perfectly reasonable action flick with some well-worked set pieces and charismatic performances from its leads.  The thrust of the story – that of a collective group facing up to seemingly implacable forces – is pretty much the same, but Fuqua and his scriptwriters (Nic Pizzolatto and Richard Wenk) ring in the changes in the more precise details.  Whereas Sturges’ narrative concerned itself with a simple Mexican village under constant attack from vicious bandits (their leader if you will recall was the great Eli Wallach), Fuqua’s arc begins with the mining community of Rose Creek which finds itself under siege from a relentless industrialist by the name of Bartholomew Bogue (an underused Peter Sarsgaard).  Bogue of course has commercial motivations at the heart of his interest in the town.  After witnessing the slaughter of a number of townspeople as a warning to all others, widowed woman Emma Cullen (a very plucky Haley Bennett) and Teddy Q (Luke Grimes) decide to seek help from an outside force of men.  Luckily, for them, they happen upon one such man, a warrant officer by the name of Sam Chisolm (Denzel Washington). 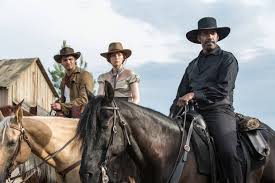 Chisolm, naturally, has no interest in the job at first, but is suitably impressed by the townspeople’s resolve to offer everything up in order to save their settlement.  His interest is especially piqued when he hears Bogue’s name (you guessed it, a backstory) and sets about recruiting a group of gunslingers or any suitably skilled miscreants he can lay his hands upon.  And so we get the appropriately ethnic diverse group which consists of leading man Denzel, gambler and charming boozer Josh Faraday (Chris Pratt), legendary sharpshooter Goodnight Robicheaux (Ethan Hawke), knife expert and then-some Billy Rocks (Byung-hun Lee), enigmatic tracker Jack Horne (a burly Vincent D’Onofrio), Comanche warrior Red Harvest (Martin Sensmeier) and Mexican outlaw Vasquez (Manuel Garcia-Rulfo).  It’s not long before Denzel and his ensemble arrive in Rose Creek and pick a fight with Bogue’s skeleton crew, left behind in the town to ensure that it is abandoned by its occupants within the period of time the merciless capitalist has allowed. 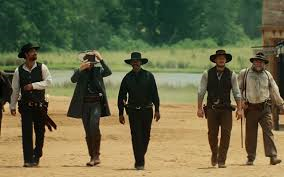 Fuqua and his writers offer us some nice vignettes of camaraderie, and observations on plain folk taking up arms in order to defend the collective as a whole, but there’s not a whole lot else to get excited about here.  The Magnificent Seven is a perfectly solid remake (or should I use the word re-imagining which currently seems to be in vogue) which does not in any way offer anything original or compelling beyond its own narrative trajectory which, ultimately, is quite linear.  The cast acquits itself well of course: Washington could never deliver a bad performance even if he tried; Chris Pratt is highly watchable as always; and there’s a fine turn from Ethan Hawke as the famed sharpshooter who appears to have lost his way and his valour.  With a budget of $90 million, the production values for a period piece are what we have come to expect and there’s a moderately rousing score courtesy of James Horner and Simon Franglen.  The former-mentioned Oscar-winning composer had begun work on the film before he tragically died in an air accident – this is his third and final posthumous release – and English composer Franglen was brought in to complete the work.  On the subject of music, mention of course has to be made of Elmer Bernstein’s iconic main theme from the original.  Without giving anything away regarding the plot, or eventual denouement, it suffices to say that, thankfully, it does receive an airing which, alas, only comes at the end credits.  It’s one of the more rousing moments in the film.  How often does one get to say that about end credits? 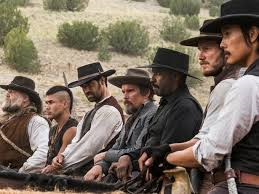 All in all it’s a serviceable job by Fuqua and his cast and crew.  The Magnificent Seven in no way dishonours its source material and for a Friday night out at the movies you could do a whole lot worse.  But here’s the thing – and a personal issue this reviewer continues to have with such enterprises – why remake such classic films at all?  Is it because of an acute lack of material out there in the creative world, or just simply a financial ruse by studios such as Columbia and MGM?  Distracting as it may be, The Magnificent Seven remake can hardly be regarded as the most necessary cinematic thing ever.  Did we really need it?  I think not.  And I shudder at the thought of what other such classic originals may be plundered before long.  But then again, I’ve just contradicted myself, haven’t I?  Sturges’ film was, after all, a remake itself way back in 1960.  Or should I say re-imagining?  Enough said I think.