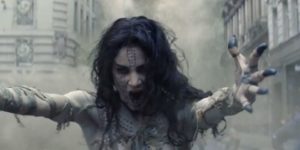 When approaching a film such as 2017’s re-imagining of The Mummy (well, actually, the intended first installment of Universal Pictures’ Dark Universe series – just watch what they do as soon as the iconic logo appears across the globe) one tries to keep an open mind in spite of the pretty much universally (see what I just did) scathing reviews this action-adventure flick has received to date.  In this day and age of the internet, it’s quite difficult to keep one’s head down when a major theatrical release meets with such scorn and derision.  The review aggregator site Rotten Tomatoes has it below 20% at the time of this posting and suggests in its consensus, ‘a speedy unraveling for the Dark Universe.’  That may well be so.  The Mummy’s budget was a reported $125 million and a film of its kind employs a full-on marketing and advertising campaign that normally means it must gross approximately two-and-a-half times what its production cost before it begins to realise a profit.  One suspects that the powers-that-be at Universal will be keeping a close eye on this over the coming weeks.  When previously I posted an article on this very site concerning the first crop of summer blockbusters for 2017, I suggested that Universal’s reboot of The Mummy franchise (it’s nine years since The Mummy: Tomb of the Dragon Emperor) might be one to come unstuck given the crowded schedule which includes entries such as Spider-Man, Wonder Woman, Pirates of the Caribbean and Guardians of the Galaxy.  I based this supposition also on the fairly lame trailer I’d viewed online which consisted in the main of a plane crash and appeared to me, at least, to have been lifted from one of Tom Cruise’s Mission: Impossible films; the prologue from Christopher Nolan’s The Dark Knight Rises also came to mind in this latter respect.  The sequence in question here arises after Nick Morton (Cruise) and his partner Chris Vail (Jake Johnson) have unwittingly discovered the tomb of one Ahmanet (Algerian-French actress Sofia Boutella) in present-day Iraq.  In a rather heavy-handed attempt to infuse some humour into the piece (not for the last time, though one would wish so), the screenplay by David Koepp, Christopher McQuarrie and Dylan Kussman has the two exchange some barbs about entering the tomb and extracting the sarcophagus in which Ahmanet (who has been a rather bold lady in the distant past) is effectively held prisoner.  Just for good measure, there is the introduction also of Annabelle Wallis’s Jennifer Halsey, a pretty archaeologist with whom Cruise has had a recent fling.  There’s a joke about intimacy and 15 seconds which is as subtle as the punch she lands on the leading actor’s face.  Tom, meantime, is plagued with mysterious visions which involve him and Ahmanet and the sandy environs of the desert.  It seems the princess has special plans in mind for him which amount to a curse that cannot be broken.  Some mumbo jumbo ensues about a special dagger which can transfer the spirit of the Egyptian God Set into a corporeal being.  There’s no point in trying to follow the plot of The Mummy because the thing don’t gel as the man would say.  Best to sit back and take in the ride as it is.  Which brings me back to that plummeting plane again. 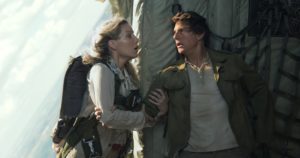 Yes, it’s spectacular and perfectly choreographed, but one expects such things when a production budget exceeds the $100 million mark.  The problem is that – like so much else in The Mummy – it smacks of a copy and paste job from another film.  I suggested two examples above which occurred to me.  When Vail becomes possessed by Ahmanet during the ill-fated flight, Cruise’s Morton has no choice but to put him down.  No more of those half-baked wisecracks we assume.  Not so because Vail reanimates like an extra from The Walking Dead and begins appearing to Morton in all manner of places.  Again, a film from the past flickered in my memory and it was John Landis’s An American Werewolf in London (remember Griffin Dunne in a state of undead following the attack on the moor).  As for the Cruiser, we get to see him all heroic as he sacrifices himself to save Jennifer by way of the one-and-only parachute on the plane (how on earth could that be on a military transport I ask).  At a later point in the film she tells him how she knows, ‘there’s a good man in there fighting to get out.’  The loveable rogue (as he’s posited here) gets himself killed in the process and yet somehow manages to awaken in a morgue the following day.  Remember how I noted that Ahmanet had some dastardly machinations in mind for him?  Well, in point of fact, I can’t really explain that.  The truth is, it’s far too silly by half.  You might as well go watch for yourself if you can spare the two hours.  Mercifully, at least, the film’s producers have kept this fluctuating mess below the 120-minute mark. 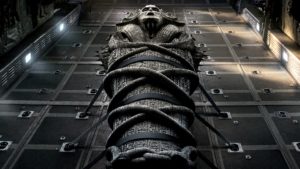 The introduction then of Russell Crowe’s Dr. Henry Jekyll does not jar at all with what has gone before.  Heading an organisation named Prodigium, the good doctor (who, of course, has his sinister alter-ego to keep at bay) is dedicated in his self-professed mission to locate, contain and, if necessary, destroy all monsters who pose a threat to mankind.  Ahmanet is one such variation of this and Crowe (enunciating his vowels and consonants for some heightened effect best known to himself) explains to Cruise why he must allow Set to possess him in order to obliterate him and Ahmanet for all time.  The obligatory scene in which his darker half – Edward Hyde – manifests itself follows naturally and, not for the first or last time, the fifty-something Cruise gets thrown around rather a lot before he prevails.  The captured Ahmanet has not gone away, however, and a badly-conceived denouement involves a sandstorm, an army of deceased Crusaders, an act of love and sacrifice, which does not ring through, and the familiar montage of closing images we now expect in such films as a voice-over (provided in this instance by Crowe) seeks to effect a thematic bridge to the (presumably) next installment.  Do I make it sound as if it’s perfectly ho-hum?  That’s because it simply is. 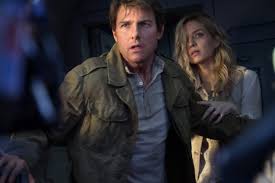 All such expressions of cynicism aside, I do understand what the producers of The Mummy are seeking to effect here, and in a cinematic world which already consists of the Marvel and DC extended entities, they are perfectly entitled to do so and good luck to them if further entries follow.  But the groundwork they have laid in this one does not amount to anything of substance at all so poor and lazy is the storytelling and the concomitant rush to plant elements and ingredients for future installments (though I do wonder about Cruise’s future participation, even Crowe’s as well).  The two gentlemen in question surely could be doing better things with their time and talent as is the case with the underused Courtney B. Vance who appears briefly as a boisterous colonel.  Star Trek Beyond’s Sofia Boutella does not fare too badly as the titular Mummy, but Peaky Blinders’ Annabelle Wallis is wasted as the token female archaeologist who wants to change the unscrupulous Morton.  Her articulated hope at the film’s end that the said individual can be freed of the curse of Set is something I didn’t personally share because, quite frankly, I didn’t give a hoot.  As for the career of director Alex Kurtzman (who has previously directed just one feature), it may well be the case that he will return to his more primary occupation of screenwriting for film franchises such as Star Trek, Transformers and Mission: Impossible.  As for the Dark Universe itself, a second film is currently scheduled for early 2019 by way of Bill Condon’s Bride of Frankenstein.  The venerable American writer-director won an Academy Award – if you will remember – for his screenplay of 1998’s Gods and Monsters based as it was on the final days of Frankenstein (1931) and Bride of Frankenstein (1935) helmer James Whale.  Now there indeed was a fine example of a film which placed a priority on narrative exposition and character development.  Let’s hope Condon (who also directed Mr. Holmes and the recent live-action version of Beauty and the Beast) does not allow his storytelling techniques to become overpowered by CGI, special effects and other such detracting devices.  More Gods and less Monsters I do beseech you.